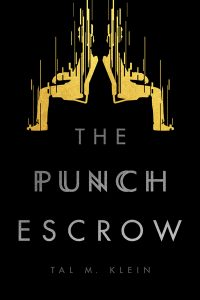 Debut author Tal M. Klein’s The Punch Escrow combines pop culture, philosophy, religion, and a whole lot of physics to recount the harrowing adventures of Joel Byram, an everyman living in the twenty-second century with his wife, Sylvia. When a routine teleport goes wrong, Joel finds himself in double trouble (quite literally) with his wife’s employer, International Transport, the powerful corporation that popularized teleportation. When Sylvia is kidnapped by a megalomaniacal co-worker, Joel must rely on his resourcefulness and witty turns of phrase to save her.

Joel is the ideal narrator, as he exudes charisma. His proclivity to self-deprecation amuses, and the engaging scientific anecdotes he delivers both inform and fuel deep thought.  While Sylvia spends less time on the page, her connection to International Transport plays a critical role in the plot, and Joel’s love for her, despite their marital problems, means she’s never far from his mind. A few of the most intriguing characters come in the shape of non-sentient life forms. Joel’s cavalier interactions with artificial intelligence, common fixtures in his daily routine, grace the narrative with a humorous undertone, and bring to life many philosophical quandaries.

Chapters jump back and forth from explanatory, often amusing, asides to action-packed segments which move the plot forward. While occasionally disorienting, the unique structure still entertains, as well as allows Klein to showcase his impressive array of cultural, scientific and literary references. Religious text surfaces at opportune moments throughout the narrative, which makes for a stimulating segue into the novel’s major theme: technology and morality.

The novel encourages its readers to reflect deeply on the power of technology in society. How much do unwitting consumers need to know about the technology they use? Can technology be immoral? And most importantly, how far is too far? Joel and Sylvia must grapple with these questions, particularly as they discover the hidden truths behind teleportation.

Klein adeptly maneuvers hard science, a shadowy corporate future, and a highly questionable method of transportation in his compelling science fiction-thriller. The Punch Escrow may not always be an easy read, but it will certainly compel you to reflect on the role of technology in your life.