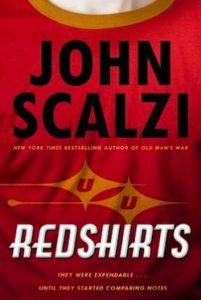 “Space, the final frontier. These are the voyages of the Starship Enterprise…” Sound familiar? Then Redshirts by John Scalzi is most definitely for you. The Hugo Award winning novel develops the often overlooked and easily dismissed “redshirt,” also known as the character that dies shortly after being introduced in a work of fiction. In a stroke of genius, the audiobook is narrated by Wil Wheaton, known for his heavy involvement in the science fiction community and, of course, his role as Wesley Crusher in Star Trek: The Next Generation.

In Scalzi’s own words from his blog Whatever: “The book Redshirts is not just a novel. It is a novel with three codas.” This is one of the most important elements to know before beginning, especially if you’re planning on listening to the audiobook. Scalzi’s decision to delve into an unconventional format works well, as the narrative introduces the reader to multiple characters and worlds, which do require extra attention, particularly when tying up loose plot threads.

The novel tracks life aboard the starship Intrepid from the eyes of new crewmember, Andrew Dahl. With the help of his fellow crewmates, Andy’s inquisitive nature leads him to investigate an unprecedented number of “nonessential” crewmember deaths on away missions. Along the way he encounters very suspicious circumstances, heavy doses of paranoia, and a death count worthy of a George R.R. Martin novel. Andy’s personality brings forth an intriguing protagonist, and his curious mind, friendly attitude, and sarcastic nature makes for a highly entertaining read.

The three codas appear after the novel ends and are most reminiscent of short stories. They expand upon and provide closure for some of the “minor” plot lines touched upon in the novel. (It is important to note that while minor, these plot lines are as vital to the novel as they are to the characters involved in them. In other words, they are just as fascinating as the main storyline). One of the short stories indirectly incorporates one of my favorite characters, Jenkins (trust me, he’s awesome), who plays a very small but integral role in the novel.

A novel with not only an experimental structure, but also a tremendously clever premise needs to be executed extremely well, and Scalzi hits it out of the ballpark. He skillfully imparts each “nonessential” crewmember with a detailed backstory, making them crucially important to the reader. When life or death situations arise, I guarantee you’ll find yourself constantly worried about the well-being of your favorite characters. The stakes are always high when death is on the line!

John Scalzi’s Redshirts stands out as a shining example of meta-fiction, particularly in the realm of science fiction. Scalzi pulls off the novel’s unconventional structure in brilliant ways, and the imaginative characters he creates amaze with their intricate back stories and their thoughtful and amusing dialogue. You cannot go wrong with this one, folks.  I’d also highly recommend checking out the audiobook, as Wil Wheaton does a fabulous job. In fact, I have decided to call him Andy Dahl from this point forward (with Mr. Scalzi’s permission, of course).