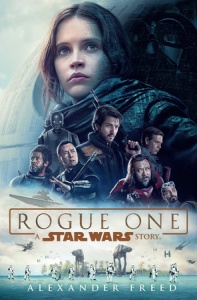 Disclaimer: I will try my best to not spoil anything, but I would still read with caution if you have not yet seen the movie. Also, why haven’t you seen it? Go do that right now.

The Star Wars series is one of the most universally adored franchises in modern history. Predictably, when Disney bought the rights in 2012, opinions were mixed. When Disney scrapped the Star Wars expanded universe, I was outraged. And yet, here I am about to give a glowing review to one of the new canon Disney novels, Rogue One: A Star Wars Story by Alexander Freed. May I be the first to say, touché, Disney?

It’s often said that the book is better than the movie, but this is not always the case with novelizations written at the same time as the movie they are based on. Luckily, the Rogue One novelization provides just enough supplementary information to make it a worthy standalone. Freed does an excellent job of portraying the characters as they are seen on the screen, but delving into their motivations at a much more intimate level. Jyn is far more than just a strong female protagonist; she is a conflicted human being with a complicated history, especially in her relationship with her estranged father, lead Imperial scientist, Galen Erso.

The novel is told in alternating perspectives from chapter to chapter, and occasionally from section to section. This method of storytelling works surprisingly well, as it provides a glimpse into the minds of all of the main characters, including a few minor ones. It is much easier to connect with characters when you have a deeper understanding of their fears and desires. In comparison to the film, Bodhi ‘s point of view is the most illuminating. Freed’s emphasis on Bodhi’s past and the anxiety that comes with it makes him a much more interesting and sympathetic character. Baze and Chirrut also receive a few additional scenes, which helps the reader better appreciate their differences, as well as the intricacies of their relationship.

A common theme in Star Wars is darkness versus light. While Rogue One continues this tradition, both the novel and the movie place a greater emphasis on shades of gray. Both sides have committed crimes; neither one is above reproach. One of the most unique threads throughout the plot is the importance of trust. Each character must overcome the moment/s in their past in which they became wary of trusting others. When they do, they can work together and form a powerful bond that sways others to unite under a common cause.

Rogue One: A Star Wars Story, both the movie and Alexander Freed’s novelization, were released at an opportune time. When the world is in a chaotic place, sometimes people need to be reminded that “rebellions are built on hope.”

Rogue One: A Star Wars Story by Alexander Freed, Review by Corinne Donnelly Disclaimer: I will try my best to not spoil anything, but I would still read with caution if you have not yet seen the movie. Also, why haven’t you seen it? Go d...
0
Average User Rating
0 votes
Please sign in to rate.