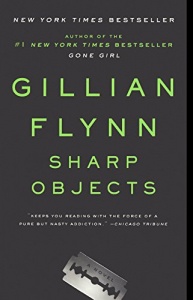 Gillian Flynn became a household name in 2012 when it seemed like the entire world obsessively read her thriller Gone Girl. Although a bit late, I was also swept up in the hype, particularly once I heard that a movie adaptation was in the works. Now that Flynn’s debut novel, Sharp Objects, has been optioned for an HBO series, in typical fashion, it was high time for me to read it. While there are striking similarities between the two novels, particularly in tone and theme, Sharp Objects lacks the same focus and direction.

Sharp Objects is a thriller with an emphasis on toxic relationships, but unlike Gone Girl, the center of the novel revolves around mothers and daughters. Protagonist Camille Preaker, a journalist in Chicago, reluctantly returns to her hometown of Wind Gap, Missouri to report on a series of murders. As Camille investigates, she must also navigate the strained relationship she has with her controlling mother, Adora, and her spoiled half-sister, Amma. While the premise sounds simple, it’s much more complicated than can be imagined, often to the detriment of the plot.

Flynn’s female characters repeatedly possess glaring faults which lead to complex personalities, but she definitely goes over-the-top here. None of the Preaker women are likeable, but more than that, they are depraved to the point of implausibility. Bizarre character choices lead to an oddly disturbing read, especially when mental health issues become a substantial portion of the plot. In a nod to the title, self-harm is a recurring motif throughout the narrative, so if that is triggering to you, please be careful.

As you’ve probably already deduced, with so many irons thrown in the fire, the plot feels a bit all over the place. Whether the result of Flynn hoping to prove herself as a fledgling author (my guess) or another reason entirely, Sharp Places would have benefited from some editing. Too many pointless jumps between settings, as well as the addition of random characters that don’t add much to the plot, distract from the surprising twists and turns, which I could find no faults with at all.

Sharp Objects by Gillian Flynn has moments of brilliance which forecast her eventual success in the thriller genre, but her debut novel ultimately comes off as flawed. If you have not yet read any of her work, I would skip this novel and jump straight to Gone Girl, which won’t disappoint.

Tweet
Share4
Pin
4 Shares
Summary
Sharp Objects has moments of brilliance which forecast Flynn's eventual success in the thriller genre, but her debut novel ultimately comes off as flawed.
5
Average

Sharp Objects by Gillian Flynn, Review by Corinne Donnelly Gillian Flynn became a household name in 2012 when it seemed like the entire world obsessively read her thriller Gone Girl. Although a bit late, I was also swept up in the hype, ...
0
Average User Rating
0 votes
Please sign in to rate.