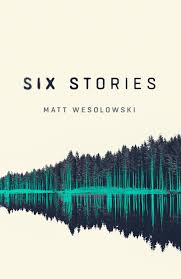 Six Stories by Matt Wesolowski is a captivating suspense novel with a clever structure: it’s written in the format of a true crime podcast. Much like Sarah Koenig in This American Life’s popular podcast Serial, Scott King is an investigative journalist on a mission to find out what happened to fifteen-year-old Tom Jeffries, whose death has been a mystery for over twenty years. In 1997, Tom’s body was found in Scarclaw Fell, a stretch of marshland in northeast England. Once a series of lead mines, since abandoned, it was a popular camping site until the tragedy of 1996, when Tom went missing. King interviews six people connected to the case, providing six different perspectives on what happened the night Tom disappeared.

Wesolowski has a talent for creating atmosphere. He throws the reader immediately into the story, which amplifies the vastness of the setting: the massive trees that span the sky, the mysticism of nature, the magic in the air. Once you think you’ve become familiar with Scarclaw Fell, he pulls the rug out right from under you. The darkness smothers, and the haunting nature of what happened here—a murder most foul—pulls you in, even as it suffocates you. Wesolowski also includes a hint of the supernatural, which amplifies as the story unravels. If you’re thinking this sounds like a great Halloween read, you’d be right.

What makes Six Stories so different from other suspense novels is the structure. In each chapter, Scott King interviews a different person connected to Tom Jeffries’ story. The chapters are typically comprised of a first-person monologue introducing the new speaker, followed by a recap of the prior week’s episode, the commencement of the interview, and then Scott providing commentary and teasing the next episode. In-between the chapters are short interludes slowly unraveling the story of how Tom’s body was found. Although the framework is formulaic, it’s handled so well that it feels surprising. You’re never quite sure what will be uncovered next.

Scott King, the host, may be the head-liner of the podcast, but he ensures that everyone he interviews is the highlight. His investment in discovering what happened that fateful night in 1996 is obvious and engrossing. King asks the right questions at the perfect times, but is still respectful of his interviewees, even when many act suspicious of his motivations. The people he interviews all possess a unique voice as well; some are cautious, others are surprisingly receptive, all seem to be hiding something. Every perspective and angle presented is interesting in its own way. It became difficult at times to remember that these aren’t real people, even Scott, despite his enigmatic nature.

Matt Wesolowski’s Six Stories has all the elements of a campfire story. There’s a boy who goes missing, a mysterious death, secrets and lies, supernatural twists and turns, and lots of teen angst. But most importantly, there’s a mystery waiting to be solved. Who or what killed Tom Jeffries? You know you want to know…

Tweet
Share
Pin
0 Shares
Summary
Six Stories by Matt Wesolowski is a captivating suspense novel written in the format of a true crime podcast. Scott King, an investigative journalist, is on a mission to find out what happened to fifteen-year-old Tom Jeffries, whose death has been a mystery for over twenty years. King interviews six people connected to the case, providing six different perspectives on what happened the night Tom disappeared.
9
Amazing