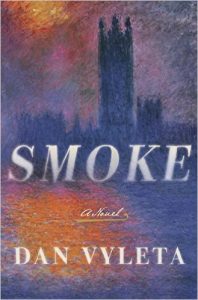 Dan Vyleta concocts a mystical world of saints and sinners in his new work, Smoke. Set in a Victorian England where all people emit smoke when they sin in thought or deed, the novel follows Thomas, Charlie, and Livia, three teenagers on a journey to discover the history and purpose of the smoke. On their quest for knowledge they seek out new allies, encounter many intellectual roadblocks, and struggle to escape the powerful forces that would prefer to see them dead.

Vyleta unveils his world very meticulously. Unfortunately, his heavy reliance on description seems to take precedence over character interaction, which leaves parts of the novel lacking. The three main characters possess strong and often rebellious personalities, which could have been revealed through clever dialogue, but Vyleta tells about his characters far more than shows through their actions and exchanges.

The novel is written in first-person perspective from varying points of view. First person is a difficult perspective to write and read, as it can be fairly limiting. In this case, it also confuses, particularly when multiple characters are thrown into the mix. Many chapters appear random and unnecessary, especially when the reader only encounters a character once or twice in the narrative. It is also difficult to maintain interest when the reader is tossed back and forth from one minor character to another.

Vyleta seamlessly intertwines two classic themes, the power of wealth and the struggle of the common man, into a discussion on smoke and morality. The rich gentry appear to smoke less, while those with little to their name live sinful lives in smoke-filled squalor. People always get what they deserve, or do they? It’s a lot more complicated than that. A warped version of religion also pops up its ugly head every so often, which suits the setting well.

Smoke as a physical manifestation of sin is one of the most fascinating aspects of the novel. Regrettably, for a novel so focused on describing how the smoke physically affects its hosts, not a lot of time is devoted to describing how it came to pass. Background information, especially in fantastical worlds, helps a reader connect more to the plot and the world itself. Without it, the setting feels too far removed.

Smoke by Dan Vyleta certainly never lacks in imagination and sophistication. Vyleta writes many beautiful passages, but they are often overshadowed by too much description and not enough action. The novel will still appeal to readers hoping to be immersed in a dense world with an emphasis on setting over character and plot. Smoke will be released by Doubleday on May 24th, 2016.

Disclaimer: I received a Limited Edition Advanced Reader Copy of this novel from Shelf Awareness in exchange for an honest review.

Smoke by Dan Vyleta, Review by Corinne Donnelly Dan Vyleta concocts a mystical world of saints and sinners in his new work, Smoke. Set in a Victorian England where all people emit smoke when they sin in thought or deed, the novel follows...
0
Average User Rating
0 votes
Please sign in to rate.