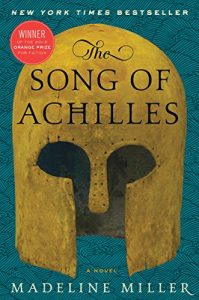 Homer’s The Iliad is a daunting tome that many readers, myself included, shudder at attempting to read. Nevertheless, the myths told in this epic poem are as famous as the stories of the Bible, and most people have at least a vague understanding of Greek mythology. Achilles is arguably the most well-known demigod, and his role in the fall of Troy has been retold many times. The Song of Achilles is Madeline Miller’s refreshing take on the life of Achilles through the eyes of his most trusted companion, Patroclus.

Miller’s awareness that readers have plenty of foreknowledge about Achilles’s life empowers her to begin the novel with the early years of her chosen narrator, Patroclus. Patroclus, a young and self-conscious prince, is the most relatable character because he is flawed, but willing to change. He is also the foil to Achilles, the “perfect” child of a mortal king and a sea goddess with enough skill and self-confidence for two men. The two boys do not become friends right away, so the reader makes observations alongside Patroclus, creating an intimate bond with him. Patroclus’s point of view never ceases to be honest and pure, which keeps the reader invested in the story.

The poetic language and rich metaphors pay homage to Homer, as well as emphasize the growing intimacy between the two young men. Miller’s portrayal of their gradual relationship comes across naturally as they grow and learn together. The two characters’ differences are striking, but when they’re together, they are the best versions of themselves. Miller is not just rewriting a myth full of war and death; she is bringing forth the very human aspect of love. Achilles and Patroclus complete each other. They nurture each other’s strengths and are not afraid to call out their weaknesses. Their companionship is their salvation.

Even though the myth is well-known, Miller fleshes out parts of the story that don’t receive as much attention. Many of her choices are bold, and she does not back down from them. Miller’s confidence shows, and it makes the story that much more enjoyable. Most astounding of all is her decision to focus so much on the gentle side of Achilles. I have always been fascinated by Greek myths, but more by the power and brutality of the gods than anything else. This novel fascinated me so much because I found the relationship between Achilles and Patroclus more intriguing.

Madeline Miller’s The Song of Achilles, is a triumph of a novel with a welcome reinterpretation of Greek mythology. It has everything a reader could ask for: gods and magic, war and political machinations, and most importantly, a romance worthy of the ages.

Tweet
Share20
Pin
20 Shares
Summary
Madeline Miller’s The Song of Achilles, is a triumph of a novel with everything a reader could ask for: gods and magic, war and political machinations, and a romance worthy of the ages.
9
Amazing

The Song of Achilles by Madeline Miller, Review by Corinne Donnelly Homer’s The Iliad is a daunting tome that many readers, myself included, shudder at attempting to read. Nevertheless, the myths told in this epic poem are as famous as t...
0
Average User Rating
0 votes
Please sign in to rate.