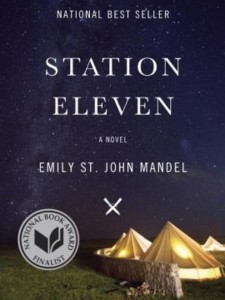 It’s a common story: disease meets world, world meets disease, death and destruction ensues. But Emily St. John Mandel’s Station Eleven takes the concept a bit further by twisting it into a reflection on the power of human relationships. Throw in a little Shakespeare, some Hollywood drama, and a sci-fi comic strip, and you get an enjoyable page-turner through a dystopian hell.

Despite the end of the world vibes, I felt very close to home while reading this novel. While most of the plot takes place in and around Toronto, there are plenty of flashbacks to Hollywood during its hey-day. It was highly entertaining, although a bit disconcerting, to read a setting depicted so accurately. I also found myself reflecting on St. John Mandel’s decision to make the Hollywood glitz and glamour sections of the novel seem gloomier than the post-apocalyptic scenes. It remains clear that in this new post-pandemic world, genuine human interactions are more important than celebrity.

St. John Mandel’s brilliant use of Shakespeare also impressed me immensely. William Shakespeare’s work, considered low-brow when he was alive, but high-art following his death was beautifully compared to the Station Eleven comic strip referenced throughout the novel. The comic strip’s author also took the cake as the character with the most fascinating inner journey.

In fact, the novel trails the lives of many characters, some of whom remain minor despite their important role in the plot. This choice did not bother me, as I found it added to the over-arching theme. Every interaction has the possibility of affecting someone in a profound way, even if it did not seem important in the moment.

The novel jumps back and forth between pre- and post-pandemic, but not so often that it confuses the reader. The transitions are incredibly effective in conveying a change in setting and dialogue as well. St. John Mandel’s descriptive writing helped me visualize the events and characters in the book more than what I’m used to, which was refreshing.

Station Eleven by Emily St. John Mandel is not your typical post-apocalyptic novel. Allusions abound, time-hopping enlightens, and relationships deteriorate and blossom in fantastic ways. It’s no surprise that the novel has been the talk of the book blogging world for quite some time. The hype is real; give this one a read!