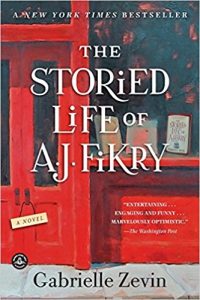 The Storied Life of A.J. Fikry by Gabrielle Zevin, Review by Corinne Donnelly

The Storied Life of A.J. Fikry by Gabrielle Zevin reads like an unapologetic melodrama. In one moment things seem normal, and in the next everything is turned upside down and backwards. Thirty-something A.J. Fikry owns a bookstore on Alice Island. The bookstore was the dream of his wife, now deceased.  After her death, he spends his days slowly distancing himself from friends and family. That is, until an unexpected package arrives.

Each chapter shares its name with the title of a novel or short story written by a famous author (Roald Dahl, J.D. Salinger, and Flannery O’Connor, to name a few). A.J. introduces each book with commentary written to someone he loves. Notably, this person is not named until later in the plot. His notes often foreshadow the events in the chapter to come, but also provide insight into his outlook on life. The emphasis on literature and its meaning is the strongest aspect of the book, and at times, I wished there was more of it.

Written in multiple perspectives, the reader can see the world through the eyes of almost every character introduced, and there are a lot of characters to follow. Unfortunately, this means that you never feel connected to any character in particular. Ample time is also not given to expand on character’s personalities. A.J. never moves far beyond the gruff, sarcastic father figure trope. Amelia, the overly optimistic sales representative who befriends him, introduces the story, but then disappears for a large portion of the novel. It is difficult to connect with her again after her absence. Other characters, such as A.J.’s nosy sister-in-law, Ismay, and the bumbling police officer, Lambiase, play important roles in the novel, but they are underdeveloped and the actions they take are hard to justify.

The action is fast-paced, and time also progresses quickly from chapter to chapter. While there are plenty of unexpected twists and turns, most are overdramatic and unbelievable. Many of the changes of heart that occur throughout the novel come far too abruptly, and none are explored enough to ever fully make sense. The final few chapters of the novel perturbed me the most, as no-one seems to be able to catch a break. And yet, despite the sorrowful events, I felt nothing.

Gabrielle Zevin’s The Storied Life of A.J. Fikry comes across as trite and maudlin. Simplistic writing, tired stereotypes, and a disjointed tone detract from what could have been a lovely, albeit sentimental, tale about the blessings of family. Alas, it wasn’t meant to be.

Tweet1
Share6
Pin
7 Shares
Summary
Simplistic writing, tired stereotypes, and a disjointed tone detract from what could have been a lovely tale about family.
6
Fair

The Storied Life of A.J. Fikry by Gabrielle Zevin, Review by Corinne Donnelly