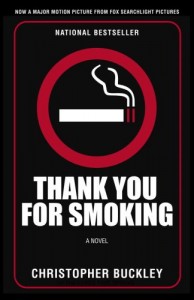 Nineties children beware, Thank You for Smoking by Christopher Buckley is set in a time before D.A.R.E. anti-smoking campaigns, a time when tobacco ads bombarded TV sets and people could smoke wherever they damn pleased. The novel trails the life and career of protagonist Nick Naylor, a sleazy tobacco spokesman in the early 1990s. Rife with irony, dark humor, and exaggeration, this political satire bitingly criticizes the tobacco industry at the height of its fall. While the sarcastic tone and blatant mockery of nicotine peddlers occasionally amuses, there were many elements that felt lacking.

Buckley’s writing style is too clinical and concise to fully engage the reader. For a novel about a man who works in an advertising agency, you would think that Naylor’s thoughts and observations would be more captivating. The less descriptive the writing, the less understandable the satire becomes. Moreover, there is a point where a lack of comprehension results in the absence of comedy. In these moments, I found myself staring at the pages in frustration instead of laughing at the dark humor.

The main purpose of a satire is to expose evil or stupidity, sometimes both, in a humorous manner. As a protagonist, Nick Naylor commits many atrocities that every now and then do elicit laughter. He and his cohorts are obviously depraved and manipulative executives with a monetary agenda. I find no fault in creating a group of nasty characters, but there should at least be someone the reader can root for. Buckley may have been a little too successful at making the reader despise everyone.  Too much wickedness does get exhausting after awhile.

Near the middle of the novel, the plot mutates rather abruptly into a thriller. While thrillers are meant to keep you on the edge of the seat (whodunit?), this one produces yawns. Yet again, we run into the problem of not liking or relating to any of the characters, let alone the protagonist. When there is no element of concern for the well-being of a character, everything falls flat.

Christopher Buckley beats you over the head with the depravity of smoking, the tobacco industry, and media theatrics, in Thank You for Smoking. What should have been a hilarious read reaffirming my decision to not smoke, left me surprisingly apathetic. I’m almost upset that I didn’t get more out of this one. Sorry all, this one’s a dud.