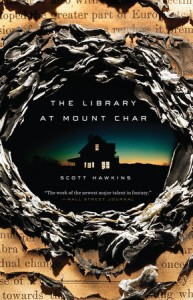 The Library at Mount Char by Scott Hawkins

Software engineer and debut author Scott Hawkins surprises and amazes in his first novel, The Library at Mount Char. The writing of a novel is a tough cookie to crack, but Hawkins’ strong characters astound and startle, and his powerful imagery strikes to the heart. If you have a strong stomach and can tussle with these unconventional and dangerous Librarians, you will discover a mystical new world within our very own Earth.

Magic plays no role in this fantasy novel, despite what you may think. Carolyn, one of a family of orphans adopted and raised by an enigmatic man named Father, is quite adamant about that. Carolyn and her siblings must each devote their lives to one catalogue of knowledge in Father’s massive Library. This unique method of teaching gives them all a very specific skill set that they are forbidden to branch out from. The plot thickens when Father mysteriously disappears, and the family of misfits, now adults, must set out on their own to find him. Everyone that the motley family encounters on their mission should be very, very afraid.

Each individual character in the novel possesses a unique view of the world, even the characters who do not classify themselves as Librarians. While some authors would find this limiting, Hawkins thrives. He does not create stereotypes, but manages to build a vibrant sequence of characters with their own opinions and very specific eccentricities. How can you not be impressed by an author who can weave together a believable story with talking animals, god-like characters, and picnics on top of another universe?

Hawkins’ descriptions also impress immensely, although they can occasionally fall on the spectrum of too gritty for all readers to comfortably enjoy. There were moments when I was forced to put the book down because I was so physically and emotionally upset. This is a great sign of an effective narrative though, as I was clearly invested in the plot. Keeping that in mind, I would recommend for highly intuitive readers to be wary of reading in a public place or in a work atmosphere. And if you cannot stomach violence in a novel, be cognizant that there is a lot of it.

The Library at Mount Char by Scott Hawkins is full of the wild imaginings of an author with a uniquely scientific background. His experiences add a lot of intriguing and bizarre moments to an already unconventional fantasy novel. I promise that you’ve never read anything like it before, and whether or not you end up as enthralled as me, you won’t walk away without being affected.

The Library at Mount Char by Scott Hawkins, Review by Corinne Donnelly