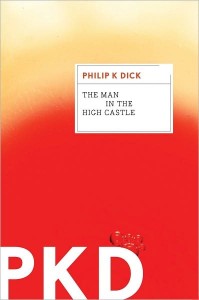 Philip K. Dick’s The Man in the High Castle has a fascinating premise. I mean, who wouldn’t want to read a novel set in an alternate universe where Germany and Japan won World War II? Unfortunately, an intriguing subject does not guarantee an enjoyable novel.

To me, reading experiences require some sort of emotional connection, even if it’s rage or disgust. The characters in this novel were so incredibly one-dimensional that I found myself completely indifferent. When you don’t care about what happens to a character, there is really nothing the plot can do to make up for it.

The writing style also frustrated me immensely. This is the only Philip K. Dick novel I’ve read, so I don’t know if it is typical in all of his work, but every so often he leaves out pronouns. Without them, speech patterns become clunky and difficult to comprehend. It would sometimes take multiple read-throughs to understand one paragraph.

The setting could have saved the novel from purgatory, but Dick’s descriptions were almost non-existent. He would begin to describe a room or a person, and then would stop when things started to get interesting. I was left with so many questions and very few answers. It’s frustrating when so many captivating concepts are just barely touched upon and then left in the dust.

Since the novel lacked so many important aspects, I struggled to find any discernible themes, aside from the obvious: war. Dick trudges down a path that many other authors have crossed, and he doesn’t really add anything new to an already weary topic.

If you’re curious about the topic of World War II, frankly, I’d avoid The Man in the High Castle by Philip K. Dick. I found myself more bored than enthralled, despite thinking it would be a fantastic read.  I have heard great things about the television series though, so maybe that would be a better bet.