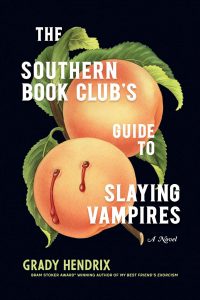 The Southern Book Club’s Guide To Slaying Vampires is the latest novel from horror-fan darling, Grady Hendrix. (Not his real name… that would be too cool, though—as if the bartender from The Shining and the god of the electric guitar had a twisted love child.) Most of Hendrix’s books focus on teenagers, or spend a lot of time flashing back to the younger years of the characters, but not here: Southern Book Club is all about parent-power.

Small town housewife Patricia Campbell’s life is humdrum, to say the least. She once had dreams, but she gave them up to support her husband’s ambitions and to raise her two thankless kids. The one thing she has to look forward to is her book club, which is comprised of women like herself, united by their love of true crime stories and paperback page-turners. At these wine-fueled monthly meetings, the ladies are as likely to talk about the Manson Family as they are their own broods. Patricia’s predictable life takes a turn for the supernatural when a mystery man moves in next-door… and he wants to join the book club. Sun-shunning James is somewhat reluctantly welcomed into the fold, and then starts to exhibit some strange behavior. Patricia starts to wonder: has she read too many true crime books, or is there a monster in their midst?

While Southern Book Club starts off slower and tamer than some of his other tales of terror—which include We Sold Our Souls and My Best Friend’s Exorcism—it is still compulsively readable. I found myself staying up later and later each night, as I absolutely had to finish “just one more chapter.”

Hendrix isn’t only a novelist, he’s also an expert on old school horror (his nonfiction bestseller, Paperbacks from Hell, which features the art of pulp fiction from bygone eras, is a must-have for genre fans), and to honor that, his books are all (so far) set in previous decades. Southern Book Club spends most of its time in the 1990s, and it works perfectly for this story and setup. Yet, the issues explored are, sadly, still relevant today: racism, classism, sexism, and, well, all the isms! But the book isn’t preachy or message-heavy. Like all good topical horror, it weaves the issues in with the genre allegories and keeps the horror story at its forefront. More than anything, Southern Book Club reminded me of movies—movies like Fright Night, Disturbia, and The Wretched. But unlike those flicks, this novel turns the suspicious teenage protagonist into a middle-aged mom, which is pretty clever indeed.

There are a few shaky moments in the story, in which Patricia seems so gullible as to be unbelievable, but the 90s setting helps a bit. There are reasons that she doesn’t (or can’t, due to the now-primitive technology of the day) dig a little deeper when she first starts to suspect that the new neighbor might be more Jeffrey Dahmer than Mister Rogers.

The publisher of Southern Book Club calls it “Fried Green Tomatoes meets Dracula”—and that is apropos for sure. There’s snark and heart fused with blood-sucking terrors in the night. While most of the novel is character-driven, there are a few masterfully-written moments of sheer fear that will stick with you long after you turn the final page. (Those with rat phobias: Brace yourselves!)

Before it was even published, Southern Book Club’s screen rights were snapped up by Amazon Studios. The plan is to turn the novel into a series for Prime.

Bored and neglected, 90's Southern suburban housewife Patricia Cambell has little in her life that truly brings her joy. Her days are filled with caring for a senile mother-in-law, a husband who spends much of his time working and children who are nearly grown.
0
Average User Rating
0 votes
Please sign in to rate.
Writer(s):Grady Hendrix
Genre:Horror fiction, Southern Fiction, suspense, Thriller