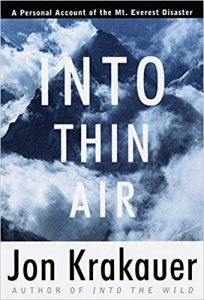 Into Thin Air by Jon Krakauer, Review by Corinne Donnelly

As another climbing season on Mount Everest passes, this year’s season deadlier than most, Jon Krakauer’s Into Thin Air acts as both a witness and a warning to past and future mountaineers. Published in 1997, a year after the events of the 1996 Mount Everest disaster, Krakauer’s intimate account of the deadly expedition topped the charts. It remains popular to this day, as it was recently adapted into a movie, and it continues to be studied in classrooms across the nation.

“…attempting to climb Everest is an intrinsically irrational act—a triumph of desire over sensibility. Any person who would seriously consider it is almost by definition beyond the sway of reasoned argument.”

Krakauer begins the book on a literal high point: when he reaches the summit of Everest on May 10th, 1996. This short chapter doesn’t provide much information beyond foreshadowing the disaster to come, but it is highly effective at piquing interest. A few arguably dull, albeit informative, chapters follow, providing background information about Mount Everest, including how it was discovered and named, as well as brief descriptions of some of the most famous expeditions led by explorers George Mallory and Andrew Irvine, as well as Edmund Hillary and Sherpa mountaineer Tenzing Norgay. The book picks up steam the moment Krakauer starts his account on March 29th, 1996.

Krakauer is an excellent writer. He wrote most of his account throughout the ordeal, only later going back to add his research and provide a more intimate version of events. This approach pays off wonderfully, as his descriptions of the cold beauty surrounding him are so palpable that it’s difficult not to feel like you’re taking the journey with him. The addition of quotations about Everest and a variety of other pertinent topics (the allure of danger, the perils of exploration, etc.) convey a sense of universality to the book, as people have always been attracted to the unknown, despite the potential risks.

“…on Everest it is the nature of systems to break down with a vengeance.”

The most fascinating parts of the book involve the tour guides and clients, their behavior, and the mistakes they made. The team Krakauer joined, led by expert climber and tour guide Rob Hall, was one of many that began the ascent during the 1996 season. Surprisingly, most clients of the guided tours are not professional climbers. If they could pay the hefty permit fee, which at the time was roughly $65,000 per person, they could join an expedition. When a motley group of inexperienced adventurers band together to climb the highest peak in the world, it is not surprising when things start to go awry. But the sheer amount of absurdity displayed is still astonishing and tragic.

Perhaps the biggest drawback of the book is that it’s told solely from Krakauer’s point of view. It’s difficult to stay objective when writing about one’s own experience. He does attempt to remedy this predicament by interviewing and adding direct quotes from other team members throughout his account, as well as a chapter devoted to how other survivors were affected by the disaster, but these efforts still fall somewhat short. Interestingly, a controversy followed the publication of his book, when another climber, Anatoli Boukreev, published The Climb, his own version of events which differed significantly from Krakauer’s account. Boukreev and Krakauer disputed for quite some time until Boukreev’s untimely death. Later editions of Into Thin Air include a captivating postscript with Krakauer’s thoughts on the debacle.

Jon Krakauer’s Into Thin Air is one of the most interesting personal accounts of a recent disaster in history. Krakauer’s thoroughness and attempt to provide an accurate representation of what happened during that fateful spring of 1996 is highly commendable. Man has always found the conquest of nature appealing. When George Mallory was asked why he wanted to climb Mount Everest and replied, “Because it is there,” maybe he would have given it a second thought if he knew the dangers that awaited him. And yet again, maybe not.

Tweet
Share10
Pin
10 Shares
Summary
Jon Krakauer's Into Thin Air is an intimate account of the 1996 Mount Everest disaster, which resulted in the gruesome deaths of 8 people.
9
Amazing

Into Thin Air by Jon Krakauer, Review by Corinne Donnelly

Into Thin Air by Jon Krakauer, Review by Corinne Donnelly As another climbing season on Mount Everest passes, this year’s season deadlier than most, Jon Krakauer’s Into Thin Air acts as both a witness and a warning to past and future mou...
0
Average User Rating
0 votes
Please sign in to rate.