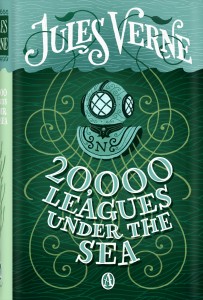 What do you get when you combine marine biology from the late 1800s and an action-adventure classic? 20,000 Leagues Under the Sea by Jules Verne, of course!

If you haven’t already read it or seen one of the many film adaptations, the novel follows Professor Arannox, an educated gentleman, and Conseil, his servant, on their search for knowledge within the ocean’s depths. Along the way, they encounter many wonders and meet the acquaintance of some intriguing characters, including the mysterious Captain Nemo.

When the plot focuses on the conflicts our cast of characters face on their journey, the pages fly by. From kidnappings to shipwrecks, a lot happens in what could be considered a rather short novel. Unfortunately, where there’s adventure, there’s also quite a lot of seemingly unnecessary description. Much of the book focuses on various characters making observations about fish. Unless you’re a scientist with a keen interest in the biological classification of sea creatures, there’s not much that will intrigue you in those passages. The descriptions that did not bother me were those that detailed the intricacies of Captain Nemo’s vessel, the Nautilus. At the time the novel was published, submarines were still incredibly primitive, so it’s impressive that Verne was able to predict the future, in a manner of speaking.

All of the main and supporting characters are fascinating, to say the least. Professor Aronnax values knowledge over freedom, Conseil takes great pride in his subservient position, Ned Land has a bloodlust for the hunt, and Captain Nemo, well, we don’t know much about him, do we? The level of secrecy he exudes kept me engaged until the bitter end. Verne has a subtle way with dialogue too. There were many moments, particularly in interactions between Ned and Conseil, which left me chuckling to myself.

20,000 Leagues is a classic for a reason. As much as I disliked the long scientific passages, the novel certainly has its merits. If you’re bothered by the extensive marine life descriptions, I highly recommend skimming or skipping them completely if you’re concerned that they’re ruining your reading experience.