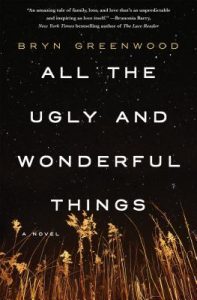 All the Ugly and Wonderful Things by Bryn Greenwood is an unconventional novel. Not only does it include a relationship between a young girl and a much older man, it explores abuse, poverty, and murder. Despite the heavy subject matter, a beautiful story emerges.

Wavy Quinn, born into a desperately poor family, spends her formative years juggled between the homes of her suburban aunt and her strong-willed, but loving, grandmother. After her grandmother dies, she finds herself back where she started, in a dilapidated farmhouse with her drug addict mother and her new baby brother, Donal. When a stranger wrecks his motorbike across the road from where she plays, eight-year old Wavy comes to his rescue. The man she saves is Jesse Joe Kellen, a “redneck biker Indian,” and the two soon discover that he will play an important role in Wavy’s life for many years to come.

Let’s address the elephant in the room: pedophilia. When Kellen meets Wavy, she is eight and he is in his early twenties. While they don’t fall in love with each other romantically until she’s a pre-teen, their relationship still rests in forbidden territory. I’ll admit that some of their interactions are often disturbing. But there’s something different about their connection. I would certainly not compare this novel to Nabokov’s Lolita. Both Kellen and Wavy possess a sense of innocence that never quite disappears, despite all that they’ve been through. From the very beginning, Greenwood establishes that Kellen understands Wavy more than anyone ever has or will, and vice versa. This does not excuse the considerable age difference, but it dampens it somewhat.

Each chapter is told in first person from multiple characters’ points of view, some major, many minor. Every chapter feels vital to the story, even the ones narrated by observers with no personal connection to Wavy or Kellen. In fact, these chapters are often the most intriguing because they allow the reader to view their relationship from different perspectives. They are also brief, but filled to the brim with important insights and authentic dialogue.

While emotional connection is vital to the story, the novel has many other fascinating sub-plots, including murder, drug deals, and even college life. Greenwood smoothly navigates these departures, somehow weaving them in naturally. Big reveals and twists come into play as well, none of which I could accurately predict, which is refreshing.

Bryn Greenwood’s All the Ugly and Wonderful Things is a force of nature. Greenwood successfully manages to write melodrama in a realistic manner. Wavy’s and Kellen’s story will surprise you, and hopefully give you a deeper understanding of love, family, and acceptance.

Tweet
Share11
Pin
11 Shares
Summary
Abuse, drugs, murder, and forbidden love create a whirlwind of a read that will make you question the meaning of family, love, and acceptance.
8
Great