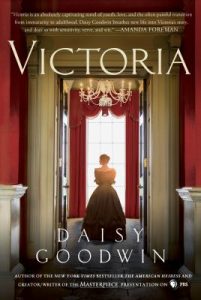 Queen Victoria ruled the United Kingdom of Great Britain and Ireland for nearly sixty-five years. The Victorian Era (1837 – 1901) was known for peace, prosperity, and immense economic and technological progress. Aside from her successful reign, her small stature, and her prolific brood of children, Victoria’s name is almost always paired with her husband, Albert, as they were a formidable pair until his death in 1861. In Victoria by Daisy Goodwin, we see an entirely different side of Victoria, as the novel, narrated in first person, follows the early years of her reign.

Victoria became queen at the age of eighteen. As a woman and as a highly sheltered youth, she was at a disadvantage from the very start. Goodwin’s choice to give Victoria sole narration of the novel may be effective to an extent, but overall, it harms more than helps. Victoria’s voice comes across as shallow and petty, especially when addressing her family and matters of the heart. Victoria’s harsh opinion of her mother, the Duchess of Kent, is overly cruel, and her infatuation with the Prime Minister, Lord Melbourne, pathetic and laughable. I can understand the desire to portray Victoria in a different, more accessible manner, but Goodwin goes too far.

For a lighter novel about the first three years of Victoria’s reign, it is far too long at nearly 400 pages. This would be forgivable if the novel focused on more than one major event in Victoria’s life, but the majority of the plot revolves around her relationship with Lord Melbourne, the Prime Minister of England. What begins as a mentor-like friendship abruptly morphs into a one-sided infatuation between a young girl and a much older man. Is their quasi-relationship based in historical fact? No. Does it make for an interesting story? I would also argue that it does not. Victoria and Albert are the historical love story here, and Albert doesn’t even appear until the last fifty pages of the book.

Goodwin depicts Victoria as a flighty, stubborn, and opinionated girl, which very well could be accurate, but it feels disrespectful. Every character, from Victoria’s overbearing and manipulative mother, to the conflicted, yet besotted, Lord Melbourne, seems like a caricature of themselves. No historical figure escapes exaggeration, and the result is that the entire experience is like reading a soap opera. I wouldn’t even consider the novel a decent insight into the time period, as the court and its various scandals are portrayed far too outrageously to be believable.

Most disappointing of all is the underwhelming writing style. From clunky sentences to abrupt transitions, there’s not much to appreciate. Simple vocabulary and identical sentence structure also frustrate as the plot drags on. The novel reads as if it was written in a rush with a tight deadline, and there was no time for an editor. It should have been a hundred pages lighter; nothing would have been missed.

Victoria by Daisy Goodwin is a baffling attempt at portraying the distinguished former Queen of England as she was in her younger years. Goodwin’s over-emphasis on forbidden affection, the gossip of the court, and other trivial matters, makes for a dull and perplexing read, which I suspect Victoria herself would have been appalled by.

Tweet
Share12
Pin
12 Shares
Summary
Queen Victoria narrates the first three years of her reign, as she struggles with trivial matters like dealing with her overbearing mother, ensnaring the affection of her Prime Minister, and attempting to escape an arranged marriage.
2
Awful