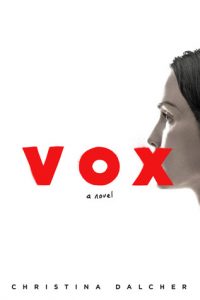 Christina Dalcher’s Vox has an intriguing, and some would say prophetic, premise. The main character and first-person narrator, Dr. Jean McClellan, lives in a society where women were silenced virtually overnight. Like all women in the US, she is now mandated to wear a bracelet, or counter, which delivers a series of electric shocks if she speaks over 100 words a day. Once a prominent scientist in her field, Jean now spends her days at home, catering to her family’s every need, and quietly seething as she reflects on how so many people, herself included, didn’t see this coming.

Dystopian novels like George Orwell’s 1984 and Margaret Atwood’s The Handmaid’s Tale became classics because they are nuanced. Everything from the characters to the propaganda is subtle enough to be believable. In Vox, the antagonists and their message are exaggerated to the extreme. All men are portrayed as either evil or passive. Most women are so defeated that they don’t fight back and many fully embrace the new roles that have been thrust upon them. Children parrot their new “traditional” schooling and report their own parents and fellow students if they don’t fall in line. Dalcher’s message is so heavy-handed that it becomes exhausting.

The main plot of the novel is straightforward, if somewhat overly reliant on technical jargon. Unfortunately, the addition of numerous subplots, most of them ridiculous, detracts significantly from the story. Toss in a few predictable and thematically inappropriate twists, and you get a confusing hodgepodge of genres that don’t mesh well. Jean’s personality, which is shallow to begin with, contradicts itself in many of the new situations that arise. In the first few chapters, Dalcher highlights Jean’s intelligence and loyalty to her family, but as the story continues, Jean morphs into a completely different person. At the drop of a hat, she makes rash decisions that could put her entire family in danger, and her reasoning is explained poorly, if at all.

Vox could have been a fascinating novel. It could have provided compelling reasons for the swift rise of the new patriarchy. Instead, it turns men and conservatives into villains, portraying them as inhuman monsters. While Dalcher never goes so far as to depict Jean and her fellow activists as perfect, their actions and principles are glorified. I write the following as a self-proclaimed feminist and liberal: the extreme thinking presented in this novel is what has caused such a huge rift in the United States. If more people would listen to other points of view without resorting to name-calling and bitter rhetoric, we would be a much healthier society. This may be too much to ask. At the very least, avoid books that encourage hate and division. Unfortunately, Vox is one of the worst offenders.

Vox by Christina Dalcher will be released by Berkley Publishing on August 21st, 2018.

Tweet
Share47
Pin
47 Shares
Summary
Vox could have been a fascinating look into a unique dystopian society. Instead, it uses the genre as a soapbox for the author's political opinions.
1
Horrendous

Vox by Christina Dalcher, Review by Corinne Donnelly Christina Dalcher’s Vox has an intriguing, and some would say prophetic, premise. The main character and first-person narrator, Dr. Jean McClellan, lives in a society where women were ...
0
Average User Rating
0 votes
Please sign in to rate.