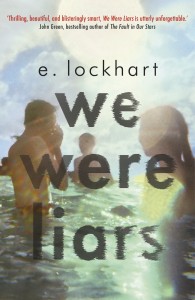 We Were Liars by E. Lockhart is a young adult novel that recounts the pampered life of the prestigious Sinclair family. Each year they spend their summers lounging on their own private island with their money, their four mansions, and their six pure-bred Golden Retrievers. By all accounts, the Sinclairs embody the picture-perfect life, and they work very hard to keep it that way, thank you very much. Unfortunately, as is often the case, money tears families apart.

Cadence Sinclair, our narrator, occupies her days with her two cousins, Mirren and Johnny, and Johnny’s pseudo step-brother, Gat. All four of them have very detailed background stories, and they never strike the reader as stereotypes, although their exploits are relatively common for teenagers. Cadence, or Cady, enjoys her time with her family and Gat, and looks forward to seeing them each year, until a mysterious event occurs and she becomes physically and psychologically broken.

The juxtaposition between Cady’s life before and after the event, as well as the author’s decision to leave her with memory loss, fascinates immensely. The stark shift that occurs in the relationships between characters leaves the reader grasping to solve the mystery as soon as possible. In fact, the inclusion of family politics, especially in regards to the massive family inheritance, is spot-on. On the surface, Cady and her family appear spoiled and ungrateful, yet, there is a quality to them that makes them relatable and just likeable enough.

The author’s lyrical writing style also adds to the haunting quality of the novel. Lockhart effortlessly interlaces dark and twisted fairy tales into most chapters, which help emphasize the themes of family, competition, and mental illness. The language also frequently surprises with jarring metaphors that describe mental and physical pain in a unique, yet highly accurate manner.

We Were Liars is one of those novels that you will not be able to put down. Your emotions will be tested, especially throughout the final half of the book, but the ride is quite thrilling. On that note, please do attempt to avoid spoilers, as they run rampant on the Internet. Pick this up if you’re looking for a read that will shock, inspire, and leave you begging for more.