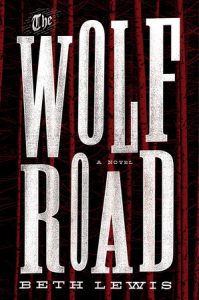 The Wolf Road by Beth Lewis tells the tale of Elka, a stubborn and curious girl raised by a hunter she christens Trapper. Born into a post-apocalyptic world decades after a world-wide disaster coined “The Big Damn Stupid,” Elka learns how to survive in a harsh environment. Despite her parents abandoning her to find their fortune in the north, Elka has a good head on her shoulders and knows her worth. Trapper has also taught her well, but when she discovers some unsavory news regarding her mysterious adopted father, all hell breaks loose. Alone again, Elka decides to embark on a long and dangerous expedition to find her birth parents. As interesting as the story seems on a surface level, the further it progresses, the more it traverses into dull and confusing territory.

Elka narrates the novel in the past tense, which disorients the reader immensely. Her narration is a re-telling of her life up to the climax of the novel, which is where the reader finds her in the first chapter. Elka intentionally spoils numerous plot twists many chapters before they actually occur. When you lose the element of surprise, a lot rides on whether or not the reader finds the characters interesting. And while Elka makes some fascinating friends on her journey, including a wolf cub, only one of these characters is fully fleshed out and likeable.

That character is Penelope, a genteel young lady with a medicinal background. When she is saved by Elka from a terrible fate, the two young women become bound together by necessity. While the novel certainly passes the Bechdel test, which is refreshing, Penelope’s personality presents itself as highly contradictory on the page. Her character is portrayed as an amalgamation of weakness due to her lack of outdoor survival skills, and usefulness as a result of her medical training. Her portrayal is confusing, and even if the reader accounts for Elka’s oftentimes unreliable narration, it still cannot be fully forgiven.

Another bothersome aspect of the novel is language. Elka speaks in a strong and exaggerated dialect reminiscent of an uneducated Southerner. This voice can be done well, as seen in any Cormac McCarthy novel, but in this case, it struggles to flow naturally off of the page. Conversations also become muddled when multiple characters with similar dialects converse with one other. When Elka describes her setting or when she has any sort of revelation, it is difficult, if not impossible, to parse out meaning as well. One significant scene in particular perplexed me so much that I recall having to read the passage four or five times in order to understand what happened.

Beth Lewis’ The Wolf Road starts with a bang and ends with a whimper. When a novel starts with the climax, interest is lost rather quickly. A narrator rife with spoilers, a trek full of endless walking, and a lack of stimulating characters creates a dismal, seemingly endless read. I wouldn’t recommend journeying down this road unless you’re incredibly determined and willing to make a massive amount of effort.

The Wolf Road by Beth Lewis will be released by HarperCollins tomorrow, June 30th, 2016.