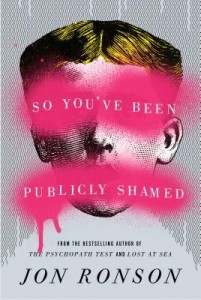 “Sticks and stones may break my bones, but words will never hurt me,” may very well be the lie of the century. So You’ve Been Publicly Shamed by Jon Ronson examines the history of public shaming and how a social media obsessed society has popularized it once again. Ronson interviews a select group of people who were publicly shamed on the Internet over the past decade. His observations shed new light on how harmful anonymous insults and threats can be, and how mere words can lead to nightmarish consequences.

Reality is often more terrifying than fiction. Ronson’s investigations hit very close to home, as most people have posted something controversial on the Internet at least once. His interviewees were average people with ordinary lives, until infamy was thrust upon them. Social media snafus spread quickly and effectively. Most readers will remember these people, not by their given names, but by the personas that their slanderers created for them. Their mistakes are publicized, and even worse, archived forever.

Ronson analyzes public shaming from a few relevant angles: why do we do it, how does it affect the victim, and how does one recover from shame? He takes an incredibly personal approach to the study, and in doing so allows the reader to make his or her own judgments too. Most striking of all is Ronson’s persistence. He is never afraid to ask difficult questions, which dredges up some surprising and astute responses.

Unlike a novel, the ending can not be satisfying, per se, because there is no easy answer to steering clear of public shaming. The only obvious solution is to not participate on social media platforms, but even Ronson dismisses this as impractical in this day and age. His research will open your eyes to the unpredictable nature of social media users, as well as the disturbing truth that a public shaming could very easily happen to anyone you know and love, including yourself.

The Internet is a marvelous invention that has brought people together, but it has also torn people apart. Jon Ronson’s So You’ve Been Publicly Shamed fiercely exposes the dark side of human connection on the Internet. While reading it, you will definitely think twice about posting anything that can be misconstrued on an online platform, and you may also have a few nightmares in the process.