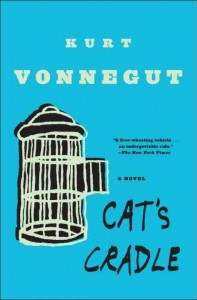 Kurt Vonnegut’s works and I have a peculiar relationship. I’m ashamed to say that while Vonnegut is a widely-acclaimed author, I have found his novels fairly lackluster. Until today! I can now officially announce that Cat’s Cradle has made my list of highly enjoyable reads.

Cat’s Cradle is narrated by a relatively mediocre gentleman named John, also referred to as Jonah. It follows his exploits on a convoluted journey to write a novel about Dr. Felix Hoenikker’s involvement in the creation of the atomic bomb, specifically the events on the day the bomb was dropped. Along the way, John meets the acquaintance of the late Dr. Hoenikker’s eccentric children, travels to a faraway island, finds religion, and experiences the end of the world.

My favorite aspect of the novel revolved around the descriptions of and excerpts from Bokononism, the banned religion on the island of San Lorenzo. Bokononism also plays a large part in the plot, as John consistently ties its teachings and scripture into the strange events that occur in his life. Bokononism parodies all religions, and it does so in outlandish ways. John’s descriptions of its rituals and commandments stir fits of giggles, but also force the reader to ruminate on the absurdities of religion in general.

As a narrator, John captivates immensely. While most of what he writes reflects back on the events of the book, Vonnegut does an excellent job of allowing the reader to grow with him. We come to conclusions about events at the same time John does, so the reader never feels left behind. His tone is also unbelievably sarcastic. When everything goes to hell all around him, it does not faze him. He just keeps on keeping on with witty observations.

The Hoenikker children, Newton, Emily, and Franklin, also contribute enormously to the plot and the enjoyment factor of the novel. All three children possess their own quirks and eccentricities, but it is their actions that end up becoming much more powerful than anyone could ever imagine. Each character, even the minor ones, has a distinct purpose in the novel, and it shows. I could easily ascertain who Vonnegut wanted the reader to judge, and who he wanted us to emulate. The themes were clear and concise, if not occasionally repetitive.

Everyone can find something to enjoy in Cat’s Cradle by Kurt Vonnegut. The novel touches on so many facets of life that listing everything would be an exercise in futility. But don’t take my word for it. As Bokononism would say, “Don’t be a fool! Close this book at once! It is nothing but foma [lies]!”

Cat’s Cradle by Kurt Vonnegut, Review by Corinne Donnelly Kurt Vonnegut’s works and I have a peculiar relationship. I’m ashamed to say that while Vonnegut is a widely-acclaimed author, I have found his novels fairly lackluster. Until tod...
0
Average User Rating
0 votes
Please sign in to rate.