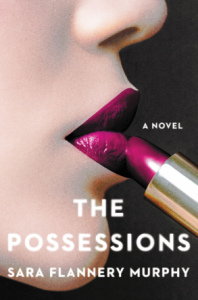 The Possessions by Sara Flannery Murphy, Review by Corinne Donnelly

The Possessions, Sara Flannery Murphy’s debut novel, examines the concept of self-identity in a world rooted heavily in science fiction. Edie, short for Eurydice, works at the Elysian Society as a “body,” where she gets paid to temporarily relinquish herself to deceased souls in order to give closure to the loved ones left behind. When Patrick Braddock, a young widower, uses her services to speak with Sylvia, his recently deceased wife, the comfortable world Edie has created for herself comes to a crashing halt.

Murphy’s take on life and death often comes across as too ambitious, especially as she weaves in and out of the lives of Edie’s clients and other co-workers. While Edie consumes herself with Patrick and his wants and needs, everyone else falls to the wayside. When the story diverts from Patrick, it seems unfocused and meandering. The addition of a potential murder not directly associated with the main plot also confuses, and Murphy devotes so much attention to it that it becomes enormously distracting.

While Edie possesses a hauntingly passive personality, perfect for her profession, the characters she interacts with make up for her lack of vigor and passion. Mysterious Patrick with his conflicted emotions dominates the action whenever he graces the page. His colleague, Henry Damson, and Henry’s wife, Viv, ooze insecurity and selfishness, which keeps the reader intrigued. Most importantly, despite being dead, Sylvia’s presence haunts Edie wherever she goes, giving the novel a distinct tone of fear and apprehension.

The most off-putting aspect of the novel is its moral posturing on the subject of suicide. One of the Elysian Society’s strictest rules states that its bodies cannot be possessed by anyone who killed themselves. While this rule is believable and understandable to an extent, Murphy takes the concept much further throughout the narrative, often beating it over the head to an unhealthy level. Not once, but twice, Edie is confronted by grieving family members who just want to speak to their deceased loved one, but she callously turns them down. Edie’s boss emphasizes more than once that suicidal people are unstable and unwelcome in her facility. The subject becomes so taboo that if it weren’t so awful, it would be laughable.

Despite channeling hundreds of souls over the five years she works as a body, Edie struggles most with Sylvia. Murphy effectively distinguishes Edie’s mundane life before Patrick and Sylvia with the confusion that envelops her after. As the end nears, the answer to the one question she keeps asking herself becomes more and more clear; does she really want to be with Patrick or is that just what Sylvia wants?

Sara Flannery Murphy’s The Possessions takes an intriguing idea and mostly delivers. While it sometimes feels like too much happens throughout the novel, most of the plot threads come together by the end. Descriptive language and deep analysis of heavy concepts make for a fascinating, albeit somber, reading experience. I’m excited to see what Murphy has in store for her next novel.

Tweet
Share4
Pin
4 Shares
Summary
The Possessions delves into the concept of self-identity through a world rooted in science fiction.
7
Good

The Possessions by Sara Flannery Murphy, Review by Corinne Donnelly