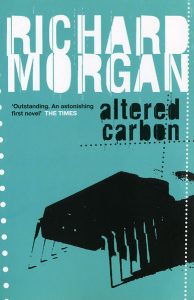 Altered Carbon by Richard K. Morgan, a novel published in 2002, has experienced a revival since Netflix’s decision to adapt it into a series. The sci-fi/noir is set in a hardened 26th century, where huge strides in technology have led to humanity’s exploration of space through downloading one’s consciousness into suitable, often enhanced, “sleeves.” Takeshi Kovacs, an elite “Envoy” soldier, awakens on Earth in a new body. His services have been rented out by Laurens Bancroft, an outrageously wealthy man who has lived over three centuries. Takeshi’s mission? To find out who murdered Laurens’s most recent sleeve.

The murder mystery aspect of the plot gives the novel a unique ambiance, which is enhanced by Morgan’s skillfully written settings. His descriptions leave just enough room for interpretation, creating an immersive reading experience. Where most of the novel focuses on Kovacs’s investigation, there are a few deviations from the plot that feel out of place. Most of these moments are dream-like sequences in which Kovacs reflects on events and people from his past. When these sections appear, they are more distracting than revealing, and they often muddy the tone of the novel.

Kovacs is the epitome of an anti-hero. He’s a soldier, but also a criminal, which is a fascinating combination. Kovacs commits atrocities with no remorse. His ruthlessness, while aimed at the “bad guys,” is often hard to stomach. He dabbles in gratuitous sex, illegal drugs, and brutal murder, and yet he retains a quality of likeability, especially in his interactions with those he works with and the victims he fights for. He walks a very tight line between hero and villain, which keeps the reader on his or her toes. When you don’t know what to expect, it makes the story all the more interesting.

Morgan introduces so many new concepts that keeping track of what’s going on can be difficult at times. The addition of numerous side characters, multiple re-sleevings, and the occasional double-sleeving, intensifies feelings of confusion, especially if you’re not fully focused on the story. When Morgan waxes eloquent on his ideas, particularly the intricacies of digital downloading, the complicated political atmosphere, and the vast divide between the rich and poor, he’s at his best. Unfortunately, he doesn’t always explain things thoroughly enough, and this proves to be a huge detriment to the ending of the novel.

It’s not surprising that Richard K. Morgan’s Altered Carbon continues to intrigue readers over a decade later. His unique glimpse into a seriously flawed future where immortality can be attained at a cost certainly opens up room for reflection and discussion. While the ideas are there, the execution is not always perfect. I don’t doubt the novel will make an excellent TV series though, especially if the adaptation stays true to the core of the novel.

Summary
While the execution is not always perfect, Morgan's vision of a seriously flawed future in which immortality can be attained at a cost opens up room for reflection and discussion.
6
Fair