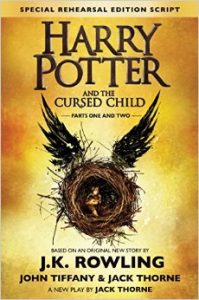 For those readers who grew up with Harry and his friends, the announcement of the script version of Harry Potter and the Cursed Child by J.K. Rowling, John Tiffany, and Jack Thorne originally started out as a dream come true. Not long after its release, for many people it turned into a disappointing mess. The chief complaint comes primarily from the observation that the story reads like a poor imitation of Rowling’s past work. All of the characters seem like caricatures of themselves, and frankly, the plot more often than not resembles fan-fiction. While hard-core fans appear deeply divided on this continuation of the Harry Potter series, ratings continue to drop significantly on most review platforms. Personally, I would very much like to pretend I never read it.

The play is not just a completely different experience than the Harry Potter books. Even if you read it fully aware that it is written in script format, many people will still leave dissatisfied. As a reader and actor, reading scripts is something I enjoy, but nothing about this experience left me yearning to read it again or even see the show onstage.  When a script is full of plot-holes, shallow characters, poorly written dialogue, and incredibly outlandish moments, it’s not the format that ruins the experience, it’s the story itself.

Some of our favorite and beloved characters play surprisingly large roles in the plot, but most of their mannerisms and choices make little to no sense. The new characters, particularly Albus and Rose, never fully win over the reader, mostly due in part to unusually grating personalities or, in the case of the latter, very little time on the page. I will admit that Scorpius is a delight, but even his presence cannot make up for what the play lacks.

If you have ever read Harry Potter fan-fiction, you are probably aware of some of the more eccentric plot threads. Many of these bizarre ideas, which admittedly can sometimes be done well, appear in the script, but in this case they never really work. Time flies by so quickly and shifts around so often from scene to scene that much of the plot can never be thoroughly explained. The last act of the play is by far the most ridiculous, as many strange, and frankly unwelcome, revelations come to light. Why everything must be so outrageously exaggerated is simply beyond understanding.

The most important lesson here may be that if an author announces they are continuing a beloved series, you cannot always expect the new installation to be the same quality as before. Don’t necessarily lower your expectations, but maybe try to view it more as a standalone than as an extension. Suffice it to say, if you cannot separate yourself from your attachments to young Harry, Ron, and Hermione, I would not recommend picking up this script.