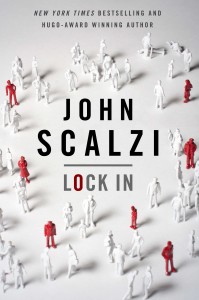 Have you ever read a book based solely on the blurb on the back cover? I picked up Lock In by John Scalzi at my local library because I found its summary fascinating. The book itself did not disappoint. Not only was I blown away, but I discovered a new favorite author in the process.

Lock In begins with a description of a virus that ravaged the world. No country was immune to it, and the entire world suffered immensely. If you somehow managed to survive it, you may have escaped mostly unscathed. Unfortunately, roughly 1% of the disease’s survivors end up paralyzed with locked in syndrome, also known as Haden’s Syndrome, for the rest of their lives.

The main character, Chris Shane, is a famous Haden and a new FBI agent. His first day on the job, he meets his partner, Agent Vann, tours his new facility, and begins an investigation of a murder committed by an Integrator, someone who had the disease and survived without becoming locked in, but can now give a locked in person use of his or her body. Unsurprisingly, things get complicated. Just a day in the life, eh? Shane has an incredibly sarcastic sense of humor and the majority of his conversations end in a hilarious quip. In fact, most, if not all, of the characters enjoy a certain sense of levity, which really adds to the reading experience.

Scalzi possesses an astounding sense of imagination, emphasized by how difficult it is to label the genre, as the book is equal parts sci-fi, mystery, dystopian and speculative fiction. He also composes striking physical and mental illustrations of characters, as many of the locked in characters must either use a Threep, a controllable personal robot, or an Integrator to move around in their daily lives. Furthermore, it takes a lot of finesse to effectively create a world that resembles our own, but in a slightly alternate future, which Scalzi accomplishes beautifully.

The book’s themes also parallel many issues in today’s political atmosphere. From debates over whether or not more money should be thrown into Haden-related government programs, to the appearance of a violent political revolution, and finally to the media’s effect on an already high-strung populace, there are some very uncanny similarities. It’s fascinating to view these issues in a new light and from differing perspectives.

The plot, the writing, and the characters in Lock In by John Scalzi impressed me immensely. As someone who had no prior knowledge about his writing and who had heard nothing about the book beforehand, I walked away with a fabulous first impression. I highly recommend this book to everyone, even those of you who have never forayed into the realm of science fiction. Go for it; you won’t regret it!

Lock In by John Scalzi, Review by Corinne Donnelly Have you ever read a book based solely on the blurb on the back cover? I picked up Lock In by John Scalzi at my local library because I found its summary fascinating. The book itself did...
0
Average User Rating
0 votes
Please sign in to rate.