10 Motherfucking Years Of ‘Snakes on a Plane.’ 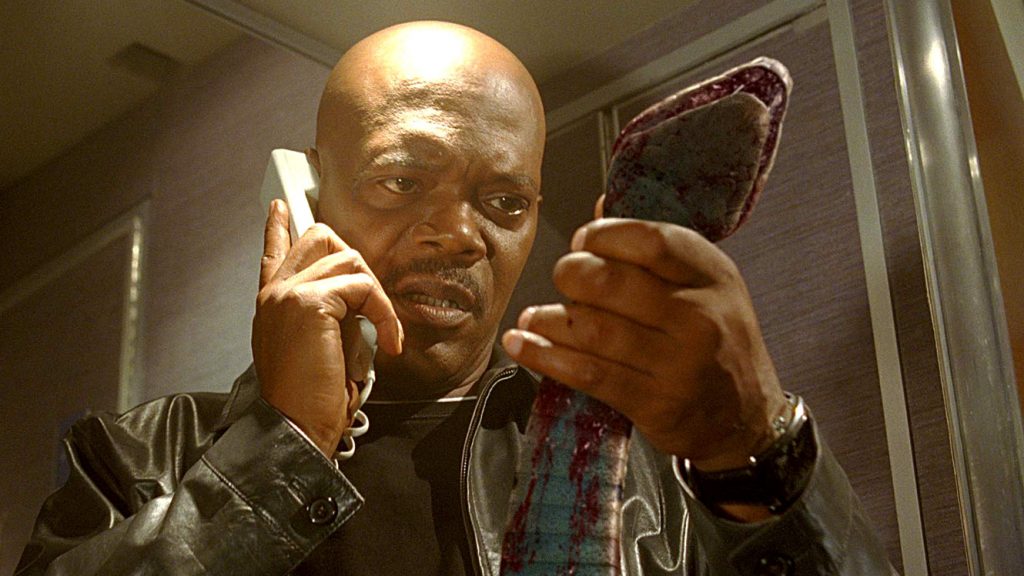 Ten years ago today, the most anticipated movie of the year was released. Snakes on a Plane had generated more hype than 2006’s blockbusters like Pirates of the Caribbean: Dead Man’s Chest, X-Men: The Last Stand or Superman Returns. I don’t think anybody ever expected it to be bigger than those old standbys, but it was clearly the most novel concept of the year.

I wouldn’t need any internet hype to get excited about Snakes on a Plane. How could you not want to see a movie like that? You see, there are snakes, and they’re ON the plane! What I want most out of movies is to see things that could never possibly happen in real life. Magical pirates and superheroes kind of fit that bill, but they sort of make too much sense to me. You can understand how a man gets superpowers, or how a drunk pirate fights monsters. When you tell me snakes can get loose on an airplane and bite all the passengers, you can have all my money.

For me, Snakes on a Plane delivered exactly what I wanted Snakes on a Plane to be. Well, with one exception. They introduce a character as a kickboxer and then never have him kickbox a snake. It was an odd oversight like it didn’t even occur to them we’d expect that. They only meant it to establish he was tough. Everything else was pitch perfect, though. The snakes’ bit passengers everywhere you could think of came out of every orifice of the plane and panicked passengers even caused collateral damage. Director David R. Ellis played it straight enough to feel like a real action movie but with a devilish grin that seemed to brag, “Yes, we really made Snakes on a Plane.”

Today we should be celebrating the Snakes on a… franchise with several sequels that find reasons for snakes to be set loose on hapless passengers. Perhaps Ellis could have returned for a sequel or two before he passed away in 2013. Part four should have been Snakes on a Spaceship. At least there should have been a sequel where the kickboxer really kickboxes the snakes.

We do have the Sharknado movies, which on their limited Syfy channel budgets have the freedom to be as crazy as they want to be. I would like to see more theatrical movies push the limits of high concept, though. Perhaps Snakes on a Plane would have been more at home in the ‘80s, the heyday of high concept blockbusters, but then we wouldn’t have had CGI snake technology to get some of the film’s best shots.

I remember where I was ten years ago today: waking up from attending the midnight showing of Snakes on a Plane. August 18, 2006, came and went and by Monday, August 21, Snakes on a Plane had only made $13.8 million. It was a rude awakening for a studio that thought they had a sure thing on their hand, and an education for an entertainment industry still learning about viral marketing.

Snakes on a Plane is readily available to watch today. It is currently on HBO Go and all the standard streaming services, or use Amazon Prime to have the Blu-ray delivered! Imagine an ensemble disaster movie like Airport with the sort of bombast of a Fast and the Furious movie. Ellis was a second unit director and directed two of the Final Destination movies. He knew how to shoot action and deliver a fun spectacle.

Perhaps most impressive about Snakes on a Plane is how much happens in the movie. If you think about it, once snakes are loose on a plane, what do they do? Of course, movie planes are always bigger than the coach planes most of us fly on, so the geography of the plane gives them a big canvas. Samuel L. Jackson gives it both the gravitas to believe he’s really fighting snakes, and the bravado to believe he’s really pissed off about it.

If the internet buzz in 2006 couldn’t make Snakes on a Plane a hit, I have little hope that my nostalgia for it will. I’m still glad I got to experience the anticipation and that the movie turned out to be completely satisfying. Perhaps, viewers, today can experience the film on the merits of its title alone, or at least lowered expectations, which can only help since it already met my high expectations. I still love those motherf***in’ snakes on that mothef***in’ plane.

10 Motherfucking Years Of ‘Snakes on a Plane’

10 Motherfucking Years Of 'Snakes on a Plane.' Ten years ago today, the most anticipated movie of the year was released. Snakes on a Plane had generated more hype than 2006’s blockbusters like Pirates of the Caribbean: Dead Man’s Chest...
0
Average User Rating
0 votes
Please sign in to rate.