After several years of waiting, Pacific Rim: Uprising is finally making its way to theaters. This sequel once again pits Kaiju against Jeagers in battles sure to cause a lot of unnecessary collateral damage. Of course, when you have movies about giant fighting robots, one expects a level of destruction. That in mind, I figured it was a good time to put together a list of great movies that feature giant robots. Not wanting to make this list too expansive, I sadly had to hold back in listing some true cult favorites (Sorry Robot Jox fans). However, I’ve tried to keep things varied enough in a world where we’ve seen CG, animatronics, and people in suits bring plenty of giant robots, mechs, automatons, and more to life.

This second Avengers film put the team up against one of their greatest enemies. Serving as another epic chapter for the Marvel Cinematic Universe, the superheroes were not only tasked with fighting off an army of robot drones threatening to destroy the world; they had to exchange quips and jabs with Ultron (voiced with dick-ish charm by James Spader). Here’s a sentient machine that rebuilt itself to be so large that Tony Stark had to question whether or not Ultron was taking steroids. A viable threat to be sure, what this mean machine lacked in scale, it made up for in deadly philosophical ideas of what to do with humanity. 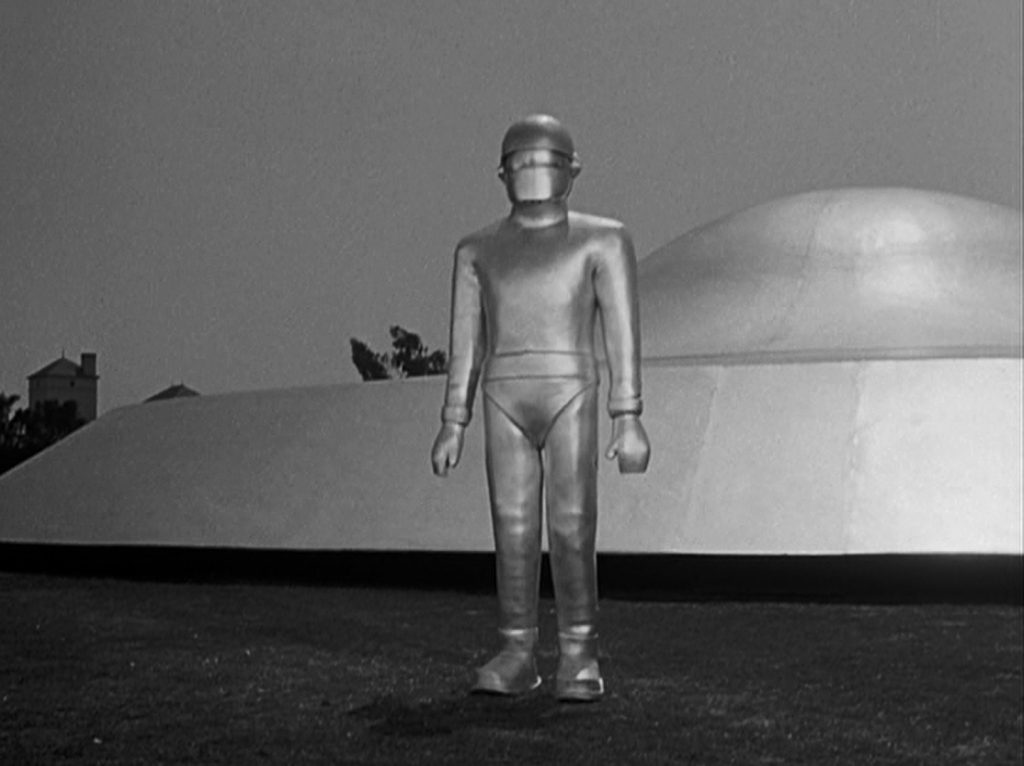 The Day the Earth Stood Still

I suppose the 2008 remake featured an even bigger version of Gort, but the powerful eight-foot-tall robot from the 1951 classic is nothing to scoff at either. The Day the Earth Stood Still is an excellent example of presenting such a thrilling idea and tackling it the way one has too at a time when special effects had to be used sparingly by writing a great script for the actors to work with and occasionally adding the spectacle. This helped Gort leave an impression. The giant robot served as a security force for Klaatu, during his visit to earth, disintegrating weapons in the face of danger. He has a simple but striking design, which was still only a part of what made this film a classic. 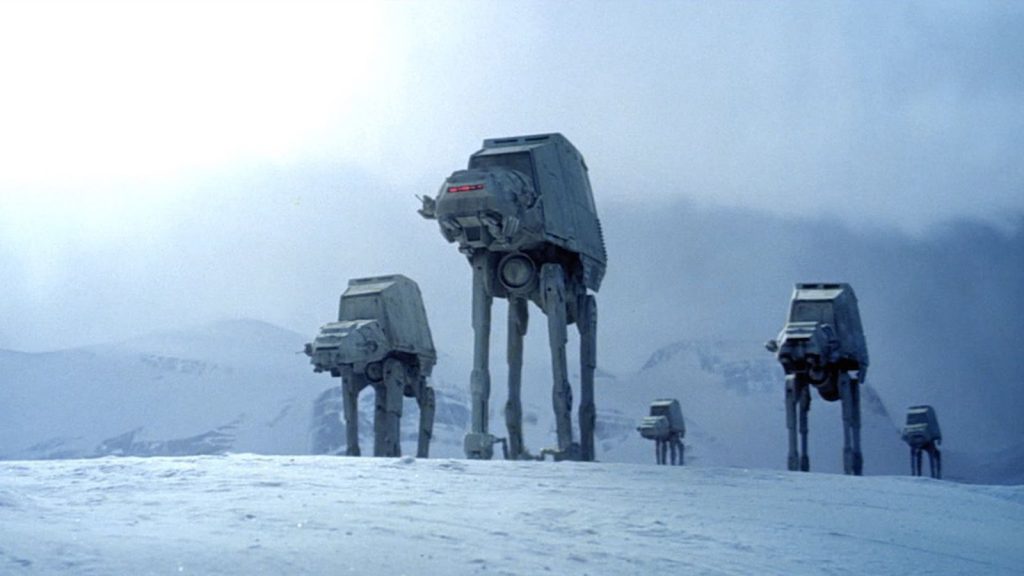 The Empire Strikes Back

Bear with me, as a robot can be defined in a variety of ways and I certainly feel the AT-ATs from The Empire Strikes Back qualify. Serving as a massive armored vehicle for the Empire, the huge beasts proved to be a significant threat to the rebel armies, who were initially dumbstruck at what to do to hold them back. While a weakness was eventually found in the form of using a tow cable to tie up these monstrous vehicles by the legs, that didn’t stop the army of AT-ATs from traversing the snow-covered fields of Hoth and taking out groups of ground forces and Rebel ships in the process. 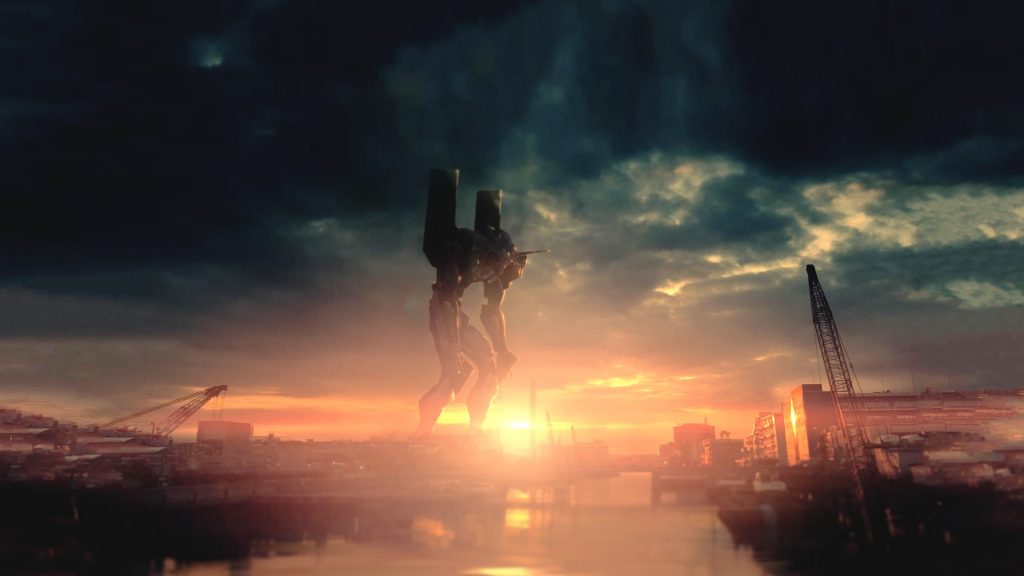 Evangelion 1.0 You Are (Not) Alone

It would not be possible to make a list of giant robots and not acknowledge the Eva’s from the Neon Genesis Evangelion anime series. Thanks to efforts by creator/director Hideaki Anno and director Kazuya Tsurumaki, a series of films were made that essentially remade the original series as a cinematic event for fans. The first installment had the same plot of the original anime and involved a young teenager piloting a giant mecha known as Evangelion Unit-01 to protect the world from mysterious creatures. This would lead to physical and emotionally draining fights that looked great on the big screen thanks to the 3D CG technology the filmmakers were able to work with. 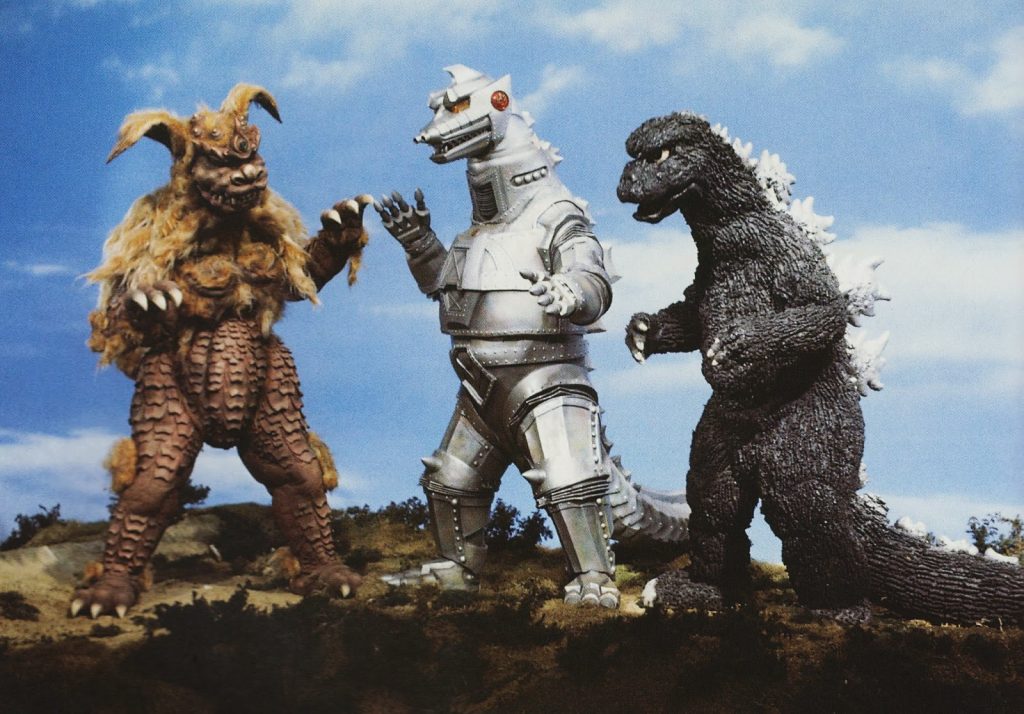 The Godzilla franchise has several contenders for a spot on this list, but Godzilla vs. Mechagodzilla was the one to go with. Originally introduced as a weapon of mass destruction created by aliens intending to conquer Earth, Mechagodzilla was one wild challenger for the famed Kaiju to take on. It’s not the easiest battle for Godzilla though, as the monster is wounded pretty heavily by Mechagodzilla. Its powers as a sort of evil doppelganger for one of Japan’s favorite citizens made it a foe that would be difficult to mess with, were it not for King Caesar, the Stone Lion God that would join Godzilla in defeating Mechagodzilla in this initial entry.

The very dark thing to keep in mind about The Incredibles is how Syndrome created a series of dangerous, spherical robots known as the Omnidroid to murder a bunch of superheroes before it had to deal with the Parr family. Thanks to its adaptive AI, sleek design, and deadly weapons, The Incredibles managed to pack in a genuinely great giant robot within its remarkable story about the trials of being a family. Omnidroid also got to be a part of some great jokes within the film, including being responsible for helping fix Bob’s back. 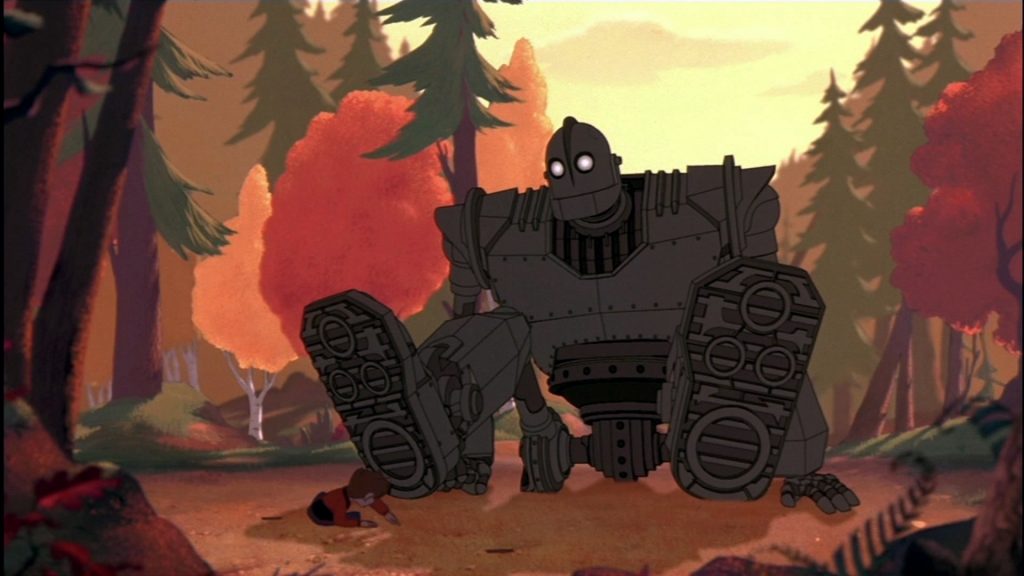 There are two Brad Bird films in a row on this list and for a good reason. The Iron Giant is a fantastic animated feature, and it features a terrific giant robot character. Voiced by Vin Diesel, there is so much to enjoy about the way this massive machine processes being on Earth, without any memory of where it came from. The relationship between the giant and Hogarth is vital, of course, as there is plenty to take in when it comes to seeing such a standout creation learning about the good and the evils that can come with life. Setting the film in the 50s is a nice touch as well, as the retro design of the robot makes it inherently likable in its clean design. 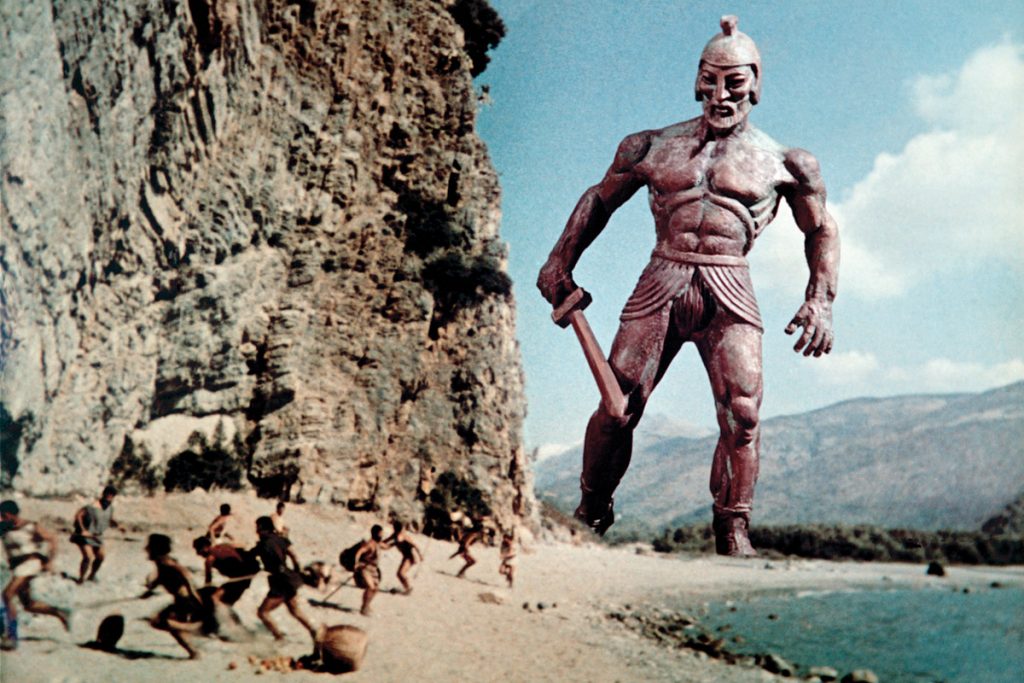 Jason and the Argonauts

This fantasy film classic features a variety of great stop-motion animated visual effects from master filmmaker Ray Harryhausen. One of the key sequences involves Jason’s fight with Talos, the giant bronze automaton that would go after Jason and his men, upon being awoken by Hercules. In a film that has no shortage of Greek myth-inspired creatures; Talos was an enormous threat to gaze upon, as Jason worked to figure out how to stop it. Talos may have joined the many opposing forces complicating Jason’s journey, but it was indeed a memorable one in a wildly entertaining adventure film. 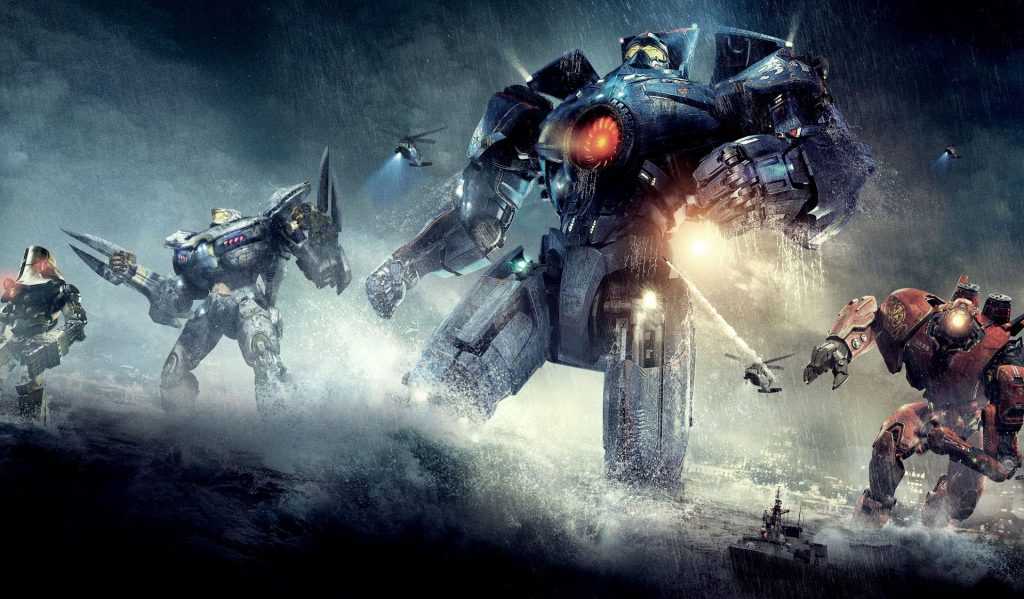 As the upcoming sequel inspired this list, it’s a good time to look back at the Guillermo del Toro original, as that film really emphasized how much of a factor the size is for these machines. Several other entries on this list certainly inspired the humanoid mechas known as Jaegers, but del Toro was happy to bring his flare to their creation. With different models, the concept of needing two pilots linked by a neural connection to control these things, and the novelty of having them fight giant Kaiju, this is a massive robot movie that happily digs into the joy of seeing monsters of this size duke it out. I remember del Toro promising Comic-con audiences that Pacific Rim would be delivering rocket punches on an IMAX screen and that was certainly satisfying to see. 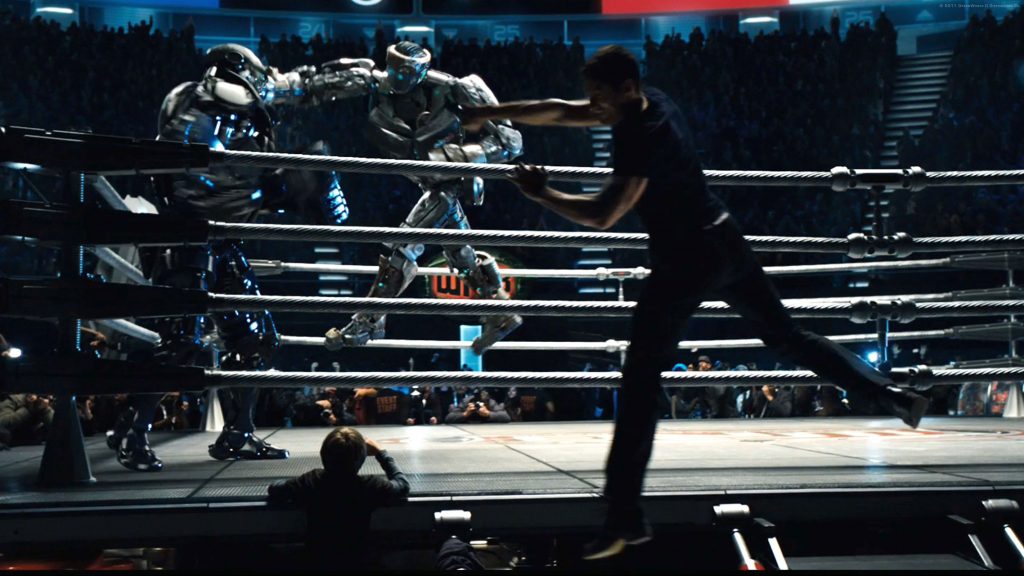 Between the use of a gruff-but-likable Hugh Jackman and the solid visual effects, there is a lot of fun to be had in the reasonably formulaic robot boxing flick Real Steel. Obviously, the gimmick revolves around the use of robots that have replaced human boxers in the not-too-distant future, but it’s a fun idea to watch unfold. Atom becomes the robot to watch, as Jackman’s character and his son work hard to make an underdog robot become the people’s champion by going up against real heavyweights. There’s also a restrained depiction of the future that I admired in this Shawn Levy-directed film, which emphasized the human drama in the midst of the wild idea of robot boxers being the sport to watch by all. It makes for an enjoyable family movie. 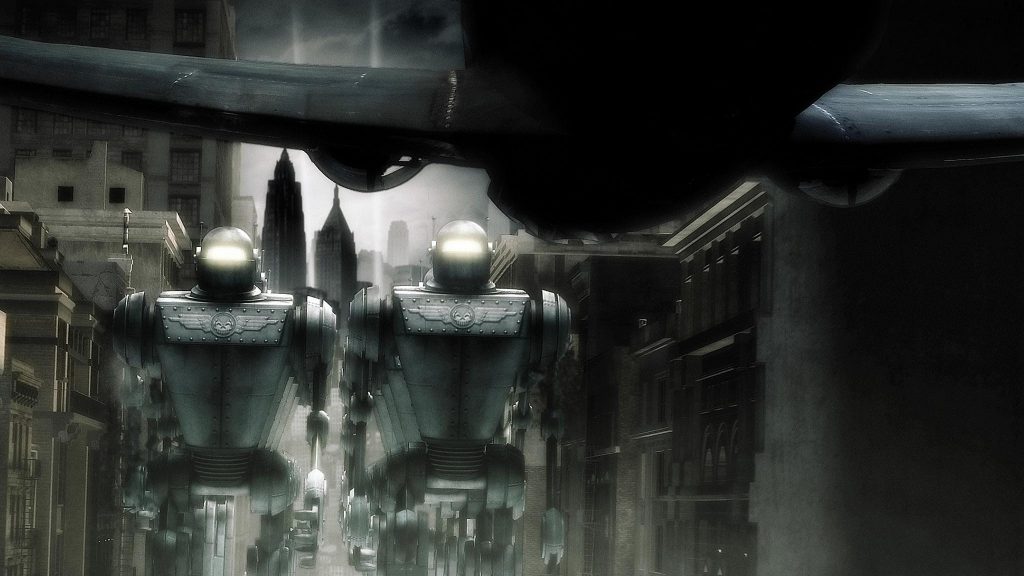 Sky Captain and the World of Tomorrow

This 2004 retro throwback was not given its due, as the film flopped at the box office, but there’s enjoyment to be had. Known as one of the movies that pre-dated others like Sin City and 300 as far as being shot entirely on a digital backlot, there’s also the giant robot factor. Sky Captain opens with an action sequence where giant robots attack a city, and Jude Law’s character flies around trying to stop them. Robots and androids play a significant role throughout this film, but much like The Iron Giant, it is a kick to retro-looking robots inhabiting a city. The film’s sepia-toned look provides an extra notable quality, placing the film within a specific timeframe as well, despite all the dieselpunk technological constructs present.

Mileage may vary on appreciation for what Michael Bay has done for the toy line/comic book franchise, but I will say the first Transformers is a solid piece of summer entertainment. Working as a typical Bay blockbuster that seems to be satirizing that type of film at various point, this big and noisy action-sci-fi spectacle gave audiences their first live-action look at Autobots and Decepticons. While the humans were given lots of time to shine, there is a level of thrill that comes with the first appearances of Optimus Prime, Bumblebee, Starscream, and others on the big screen. ILM did a knockout job bringing the Transformers to life, and it’s still a shame they weren’t rewarded with an Oscar for it. 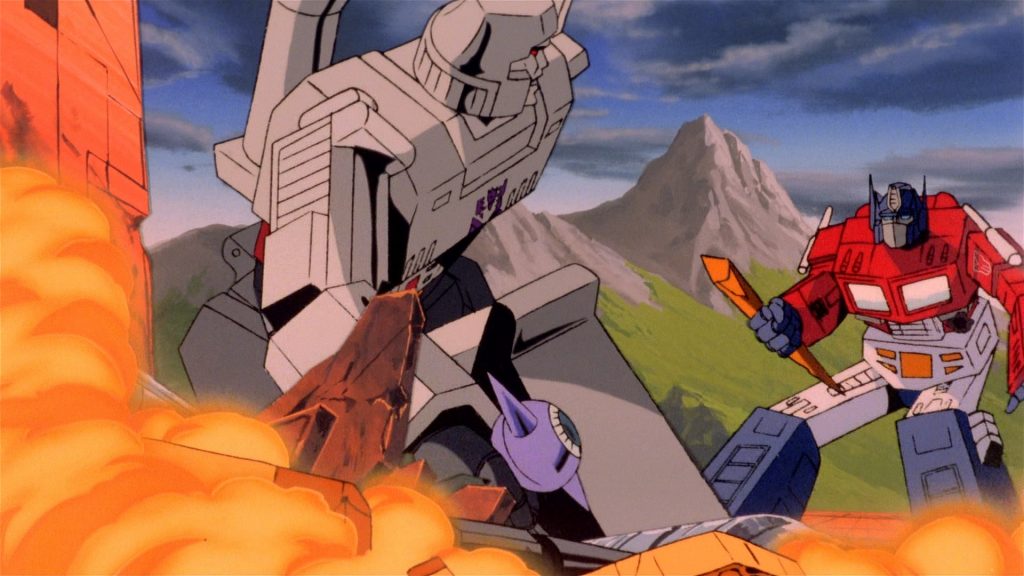 Of course, if you really want to dig into the idea of Transformers and great giant robot movies, the 1986 animated Transformers: The Movie is the place to look. Featuring an all-star cast that included Eric Idle, Judd Nelson, Leonard Nimoy, and Orson Welles and music by iconic 80s legends Vince DiCola, Stan Bush, Lion, and Weird Al Yankovic, what more could you possibly want in a film like this? Well glad you asked! The Transformers: Movie was not only notable for its excellent soundtrack and being the first major film of the series. This was also the film that had the guts to kill Optimus Prime and Megatron. Regardless of how they managed to come back in some form, that was a big punch in the gut for fans at the time, who still had plenty of loving things to say about this fast-paced, action-packed Transformers movie. As a critic, conservative in his views, he continued to have considerable influence. Among the best-known works of Wilhelm Peterson Berger is Frösöblomster (‘Flowers of Frösön’) of 1896. 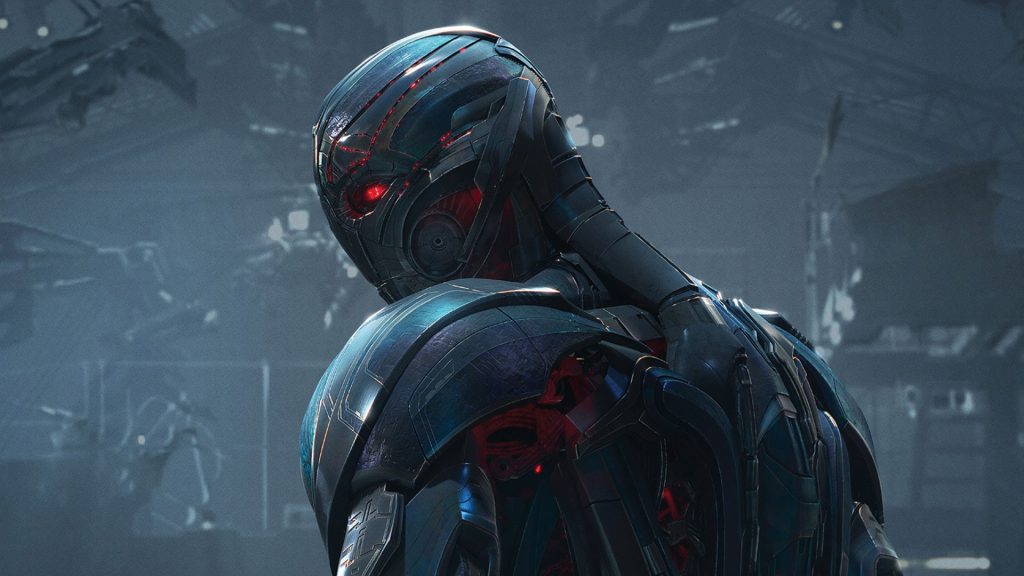 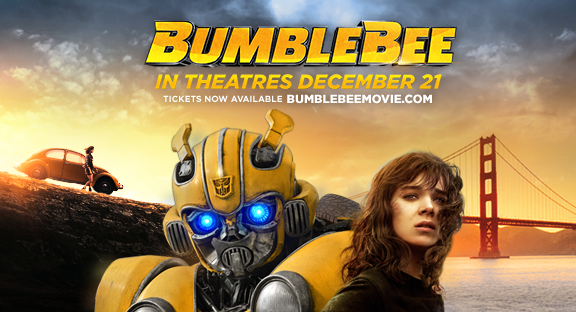 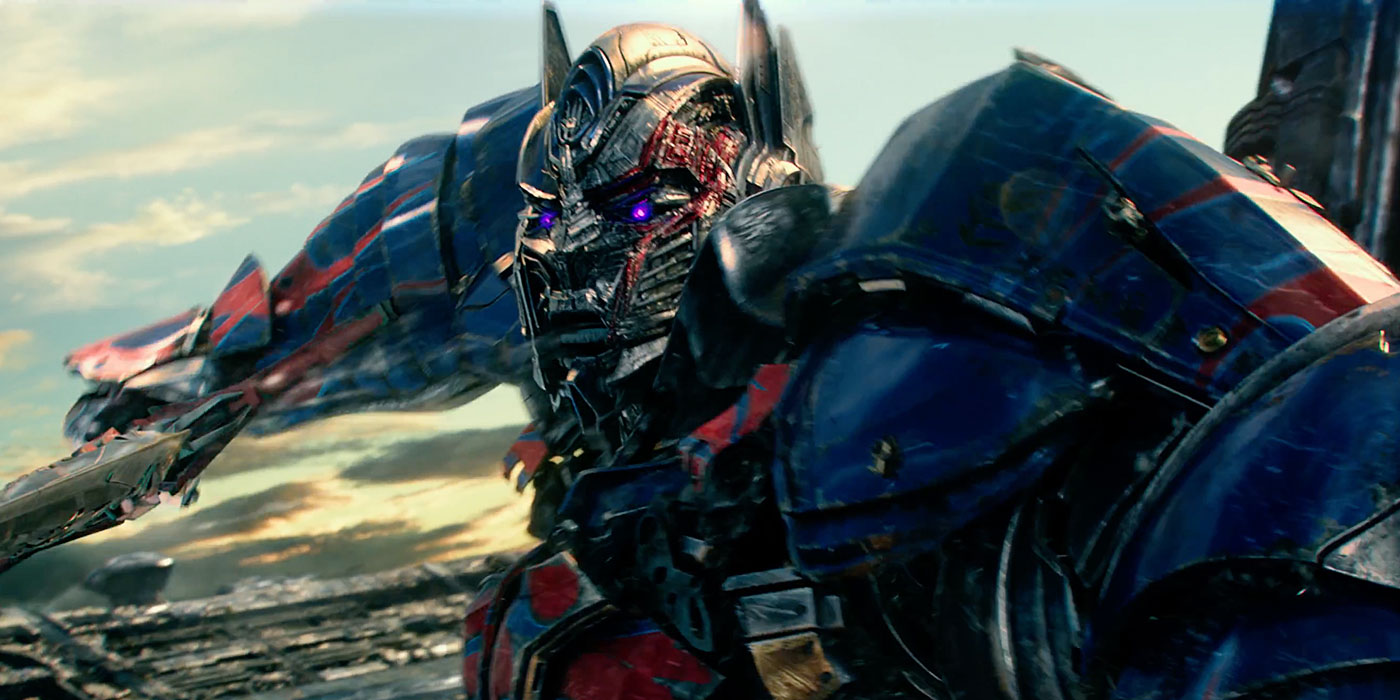 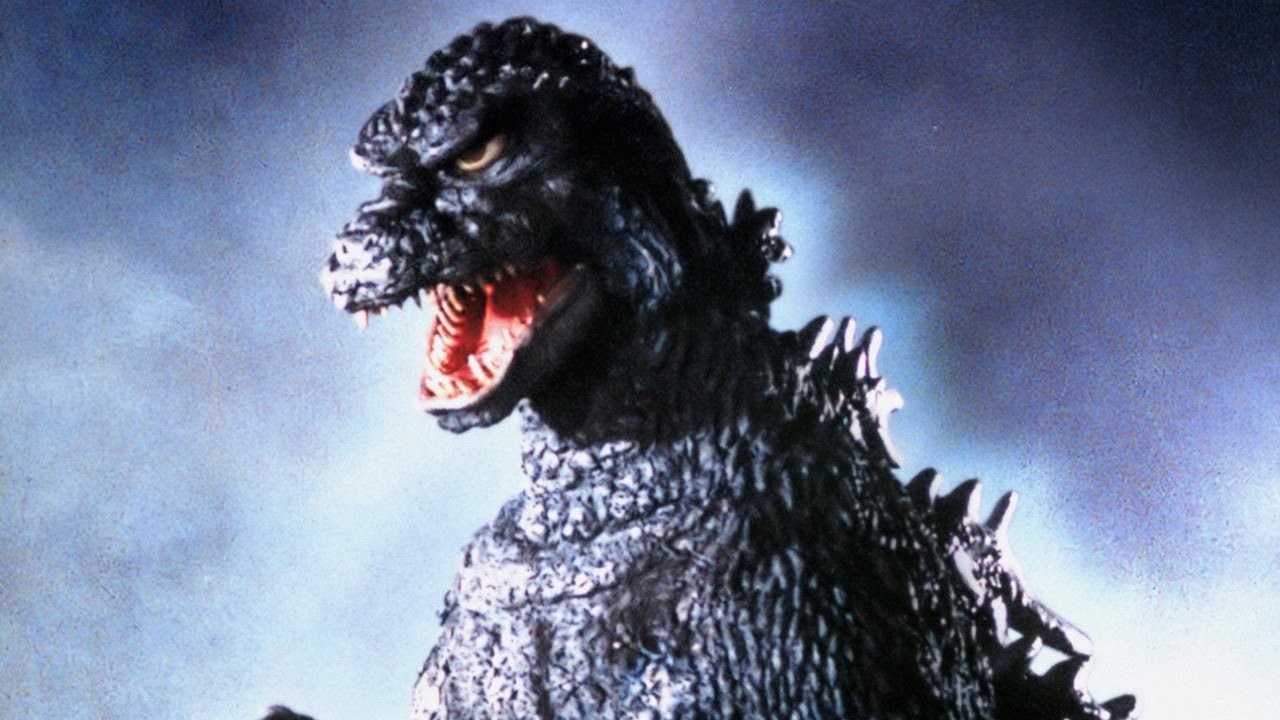 After several years of waiting, Pacific Rim: Uprising is finally making its way to theaters. This sequel once again pits Kaiju against Jeagers in battles sure to cause a lot of unnecessary collateral damage. Of course, when you have movie...
0
Average User Rating
0 votes
Please sign in to rate.