‘Spider-Man’ Continues to Swing High After 15 Years in Theaters

May 3, 2002. I was a sophomore in high school at the time, readying myself for another summer at the movies. I distinctly recall this being the summer of two mega-hits – Spider-Man and Star Wars Episode II: Attack of the Clones. As a teenager, I had been a bigger fan of Star Wars than Marvel at the time. Yet in the weeks leading up the fifth Star Wars installment, the hype was a fraction of the mega-coverage back in 1999. I wonder why. Moviegoers were still feeling the backlash of The Phantom Menace, burned by what was the most-anticipated film of all-time. Two weeks before Clones, the tide turned with the theatrical release of Sam Raimi’s Spider-Man. At last, a summer blockbuster that would resonate with both critics and audiences alike.

Superhero films, predominantly DC, enjoyed their light in the sun from time to time. Christopher Reeve’s Superman became a major hit in 1978. Though the quality of sequels dwindled with each installment, culminating in a disastrous Superman IV: The Quest for Peace in 1987. The showdown between Superman and Nuclear Man remains nightmare-worthy. A much darker turn in 1989 with Tim Burton’s Batman turned the Caped Crusader into a box office sensation. Batman emerged as an genuine “event film,” bursting at the seams with merchandise and unprecedented hype. Like the Man of Steel, Batman had turned into a Razzie-worthy caricature by 1997. Do we have to wade through Batman and Robin? Please, no!

While some attribute Bryan Singer’s X-Men as the start of the modern-day superhero film craze, Raimi’s Spider-Man delivered the promise full-throttle. By May 2002, it had been eight months since 9/11 and America needed real-life heroes as well as larger-than-life heroes on the big screen. Harry Potter and Frodo Baggins fulfilled those needs back in November and December respectively with the releases of Harry Potter and the Sorcerer’s Stone and The Lord of the Rings: The Fellowship of the Ring. Still, there was that demand for that red-blooded American superhero. Who better than a nerdy teenager from Queens? 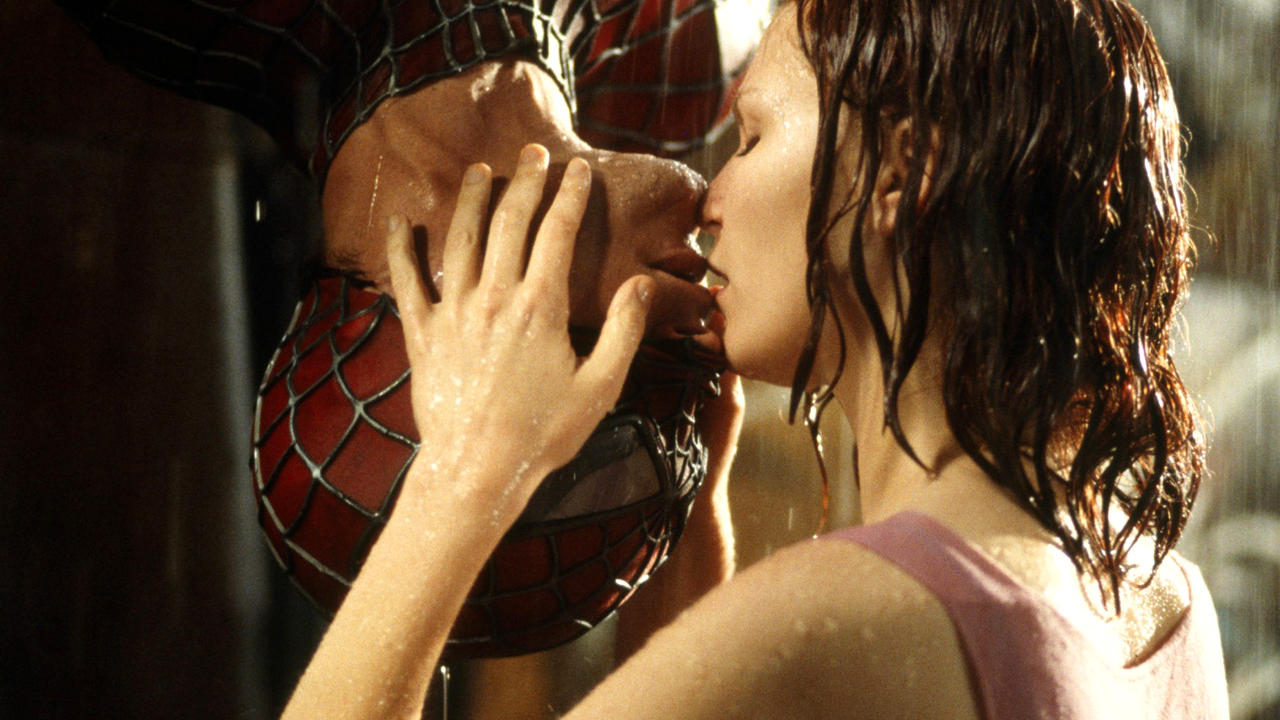 For many of us, Spider-Man was a superhero who we could relate to? A kid with an ordinary life (for a while at least). Picked on in school for being different. Too awkward to talk to the girl you secretly love. While Tobey Maguire might have been a bit too old to be playing a high school student, we ran with it. He was the ideal Peter Parker. We had no issues rooting for him in this straightforward origin story. His chemistry with James Franco as Harry Osborn and Kirsten Dunst as Mary-Jane Watson clicks instantaneously. They became a trio as iconic as Luke, Han and Leia or Harry, Ron and Hermione. Let’s not get ahead of ourselves, but Spider-Man 2 even raises the bar to the next level.

As much as I adore the Marvel Cinematic Universe and what it’s accomplished in nearly 10 years, the simplicity back in 2002 is missed horribly. Yes, Spider-Man plants the seeds of Spider-Man 2, but David Koepp’s screenplay handles it quite naturally. It’s not like now where references are shoe-horned in for a film we won’t see until six years later. Admit it, the Thanos tease in The Avengers and again in Age of Ultron tingled your inner-nerd hype level. Getting back to Spider-Man, that film was allowed to breathe. We had fun. We were never overwhelmed with an over-edited, incoherent mess. And it never felt like just a cog in the wheel towards the major endgame. Iron Man, Ant-Man and Doctor Strange carried that mantle, albeit a more contemporary blockbuster.

Rewatching Spider-Man quite recently, the Raimi film manages to hold up after 15 years. The same goes for 1978 Superman and 1989 Batman. They’re staples of Hollywood’s most lucrative genre. Even the more cheesy elements such as Willem Dafoe’s Green Goblin “golluming” like a cartoon character can still be taken as a grain of salt. Spider-Man feels like a hybrid. It never goes full Joel Schumacher, nor doesn’t quite reach the mature and serious nature of the MCU. It’s clearly a reflection of its time – one where cynicism and hate were running less rampant even in film.

While the “great power comes great responsibility” line is iconically uttered by the late Cliff Robertson, it’s perfect for this film. Spider-Man was handed the power to change the superhero genre for the better. For the most part it did, but we can never forget what it did to pave the way. Hopefully Spider-Man: Homecoming will carry the same mantle this July.