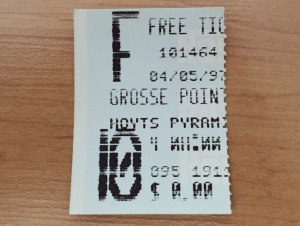 The official release date for Grosse Pointe Blank is April 11 but I saw it a week early. Back before I saw movies early for a living, I would see any movie that screened a week early at national sneak previews. Grosse Pointe Blank did it Saturday, April 5, 1997, and might have been my favorite movie of any other year. 1997 would also give us Face/Off and Boogie Nights so it’s tough competition but it’s up there.

Saturday, April 5 was a fun night but I think as it sat with me the following week I realized how good Grosse Pointe Blank really was, so much so that I saw it again when it opened. Its blend of hit man action and John Cusack comedy really worked for me. The nostalgia and midlife crisis of a 10-year high school reunion was still a long way off for me. I was a sophomore in college. I think it took me a little longer in life to get there, but going to my 20th high school reunion did it for me. Now that Grosse Pointe Blank is 20 I wonder if I have a different relationship to it. 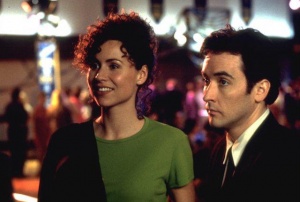 He’s been dreaming of Debi (Minnie Driver) for six years. My recurring dreams are more about places than people. I dream of movie theaters I used to go to and I’ve gone back to the ones that are still there. It doesn’t cure the nostalgia. I don’t know what I’m looking for there but I still crave the memories, although now I’ve got pictures to look at. Some of those theaters are long gone, but they were gone while I still lived there. Actually, the theater where I saw Grosse Pointe Blank in college closed to be rebuilt by a new chain with stadium seating.

Were there unfinished business with a person, that would create more of a need for closure. However, were there a person for whom I was longing, I wouldn’t need to go back to find them, thanks to social media.

The people from Marty’s class are surprised he disappeared for 10 years. I don’t think my classmates expected to keep in touch except for my close friends. Grosse Pointe Blank was probably the last generation that could disappear for a decade too. My classmates all found each other on Facebook, albeit more than 10 years after our graduation. 10 years really doesn’t seem that long to me. Maybe living nearly 40 puts that in perspective. 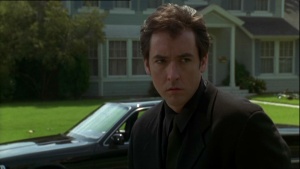 I don’t have anything as dramatic as my childhood home turning into a convenience store. My parents still live in our house. My favorite video store did become a dry cleaner. I blame Blockbuster for that. My small private school has been developed so much in the decades since I was there that nothing remains of my era. That’s just expansion, and as you can tell the movie theaters were more seminal memories to me than the halls of formal education.

I’ve also returned home more periodically since I have family and friends still living there. I’ve observed the progress and changes more incrementally. I’ve never had the experience of staying in a hotel in my hometown. That’s gotta be weird.

I do like to think that my current life is as exciting as being a hitman. Instead of killing an assassin in the hallway with a pen, I might have to step out to do a phone interview. 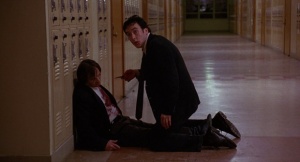 20 more years of film studies make me appreciate how well done the action scenes in Grosse Pointe Blank are. It’s known as a comedy but the fight with Benny the Jet Urquidez shows Cusack really had the moves, and Urquidez was kind enough to play the lesser fighter. The gunfights learned from John Woo how posing and taking cover make a gunfight more exciting than shot/reverse shot. And you can see what’s going on in every scene.

I relate to that idea of searching for answers in your past. It seems to be something we do because where else can we look? The thing is, for better or worse, we’ve moved on. We can reconnect but we’re still who we are now. I grew up and found a fulfilling career. Marty did too but he was more motivated by running away, but he’s still the guy who lived those 10 years in between. And a good thing too because he saves the day in the end.

I think nostalgia is good. It’s important to remember where we came from. Hopefully, we’re better now than we were. I certainly am. So I don’t want to go back. I just want to remember so I can bring things with me as I move forward.