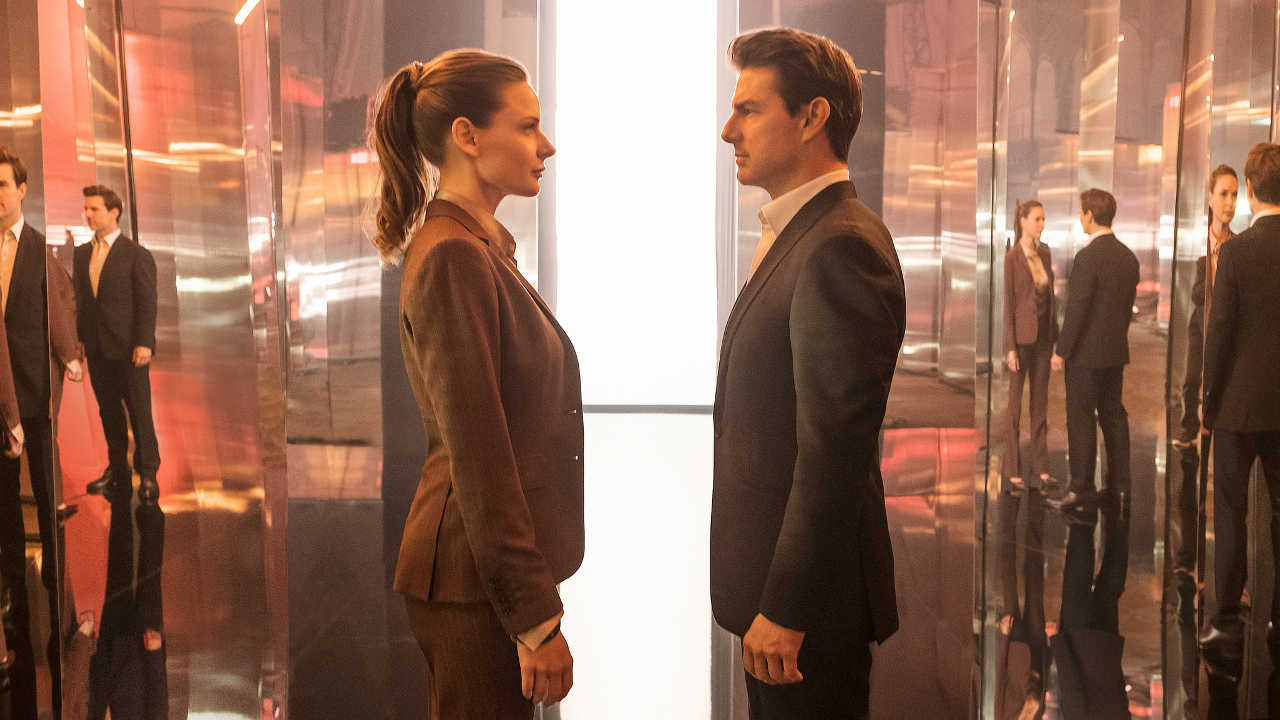 Like a fine wine (without the elegance), the Mission: Impossible franchise simply gets better as time goes on. Throwing Mission: Impossible II’s blemish out of the equation, Tom Cruise’s death-defying espionage adventures have unquestionably endured in an ever-changing cinematic landscape. Mission: Impossible – Fallout tends to break a few more franchise norms we’ve come to expect over the past 22 years. But for Cruise’s sixth outing, dialing up the ambition is never a bad thing.

While previous installments worked more as standalone films, Mission: Impossible – Fallout plays as a direct sequel to 2015’s Mission: Impossible – Rogue Nation. Two years have passed since Ethan Hunt (Cruise) and his Impossible Mission Force team thwarted international terrorist Solomon Lane (Sean Harris) and his Syndicate. Since then, the Apostles emerged from the ashes of the Syndicate, plotting a deadlier round of global terror. Hunt and his loyal IMF team, Luther (Ving Rhames) and Benji (Simon Pegg), accept their latest mission to retrieve several plutonium cores before the Apostles launch an impending attack.

After helming Mission: Impossible – Rogue Nation, director Christopher McQuarrie was asked to return for Mission: Impossible – Fallout. That was unheard of prior to Fallout as Brian De Palma, John Woo, J.J. Abrams and Brad Bird were only offered to make a singular mark on the series. Mission: Impossible – Fallout solidified McQuarrie’s return from Rogue Nation. He not only took the reins of director, but entered into auteur territory as both writer and producer. McQuarrie’s vision for Fallout capitalized on the strengths of Rogue Nation. The return of MI6 agent Ilsa Faust (Rebecca Ferguson) is welcoming as she once again comes close to an equal to even Hunt himself. McQuarrie’s eye for staging aesthetically pleasing spectacle carries over from Cruise hanging off an airplane or the underwater tank sequence seen in Rogue Nation. Whether it be Cruise’s HALO jump or navigating a helicopter through a Kashmir mountain range, stakes remain practical and breathtaking. It’s a testament to the beauty of in-camera stunt work as opposed to an over-reliance on CG effects.

Much of that can be attributed to Cruise’s dedication for the character of Ethan Hunt. Always willing to push limits after two decades, Cruise is determined to make sure audiences get the most bang for their buck. After the rock climbing opening in Mission: Impossible II and scaling Burj Khalifa in Mission: Impossible – Ghost Protocol, it’s difficult to fathom where the line will finally be drawn. And like previous installments, Cruise relies on an ensemble rather than dominating the film himself. He shares plenty of the wealth with his co-stars. Henry Cavill shakes off his Superman persona as some CIA muscle, contrasting to Hunt’s spy tactics. As a thorn in Hunt’s side, Cavill is referred to as a hammer whereas Hunt’s more of a scalpel. Rhames and Pegg return as veteran members of the IMF team – the only two teammates not caught up in its revolving door. When not hitting the naturally lighter beats, Rhames and Pegg switch it up to the occasional serious moment.

With Mission: Impossible – Fallout, Cruise and McQuarrie zero in on complexity and scale. At 147 minutes, there’s no shame in keeping a scorecard. Familiarity carry over from previous installments. There’s only so many ways to stack a pile of rogue agents, arms dealers, MacGuffins, endless betrayals and identity swaps film after film. However, Fallout keeps that suspense pulsating thanks to a script that’s fully aware how to properly reshuffle a moderately-sized deck. It’s an energetic action thriller that continues to keep giving. And in a way, Mission: Impossible – Fallout speaks to the previous five chapters, tying in each previous film. Even with five distinct visions over the course of two decades, the Mission: Impossible franchise feels more coherent now than ever.

Even if it’s not until the franchise’s 25th anniversary in 2021, a seventh Mission: Impossible film would be greatly embraced to bring closure to the series. If Cruise and McQuarrie are game, one can only hope that it’s a mission they choose to accept. 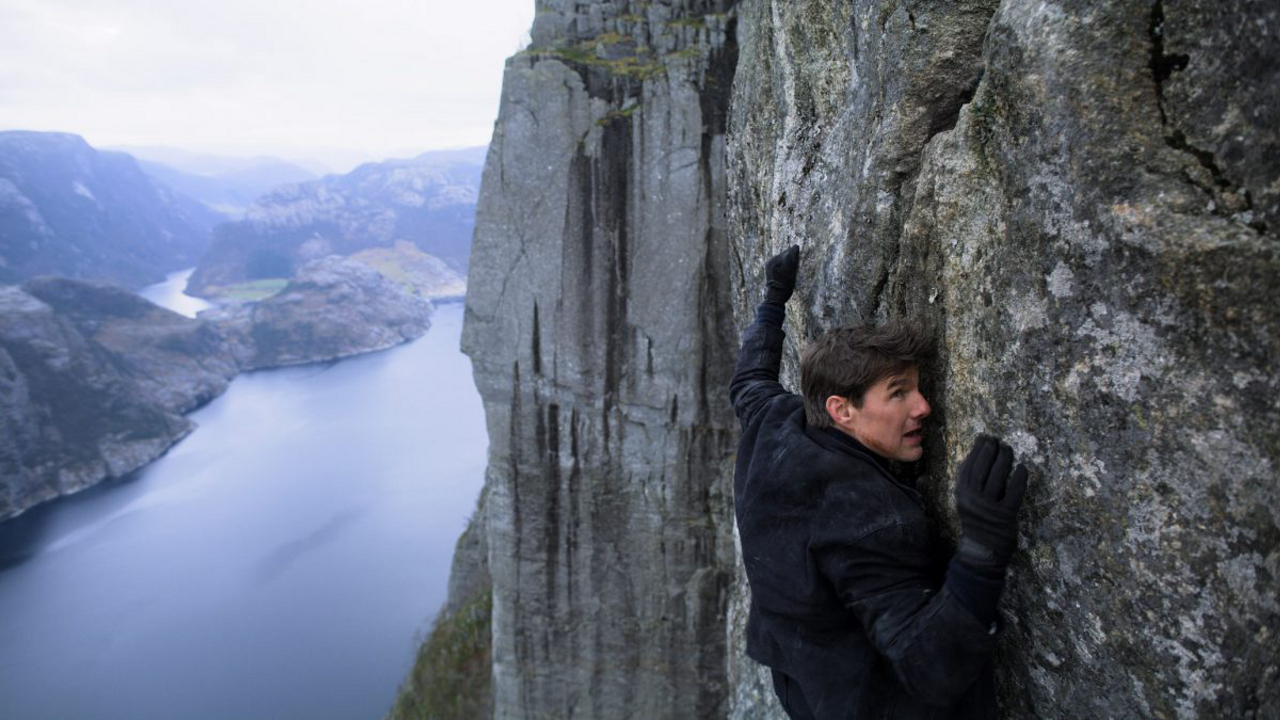 Viewers can watch Mission: Impossible – Fallout on either 2160p 4K UHD or 1080p HD. Paramount Home Entertainment delivers a sharp, crisp image throughout. The 4K UHD is more consistent than the Blu-ray, though both are more than acceptable transfers. Colors are well-realized. Though perhaps the film looks best when the IMAX sequences are displayed. The film switches back and forth between aspect ratios. There’s more image with the IMAX shots and the detail is at its peak. Interior shots feature most of the graininess in Fallout, but it doesn’t hinder a visually pleasing film.

Paramount Home Entertainment is loading up on their supplements for Mission: Impossible – Fallout. The 4K UHD disc offers three commentary tracks. Director Christopher McQuarrie is featured in two of the tracks. One is with Tom Cruise, while the other is with editor Eddie Hamilton. Composer Lorne Balfe is on the third commentary track. On the Blu-ray disc, there’s roughly an hour’s worth of content. The majority of that material is from Behind the Fallout, a seven-part feature. Chapters include: Light the Fuse, Top of the World, The Big Swing, Rendezvous in Paris, The Fall, The Hunt is On and Cliffside Clash. There’s also a short montage of deleted scenes as well as a look at storyboards and the theatrical trailer. There is also an interview with Tom Cruise in The Ultimate Mission as well as a musical featurette, Foot Chase Musical Breakdown.