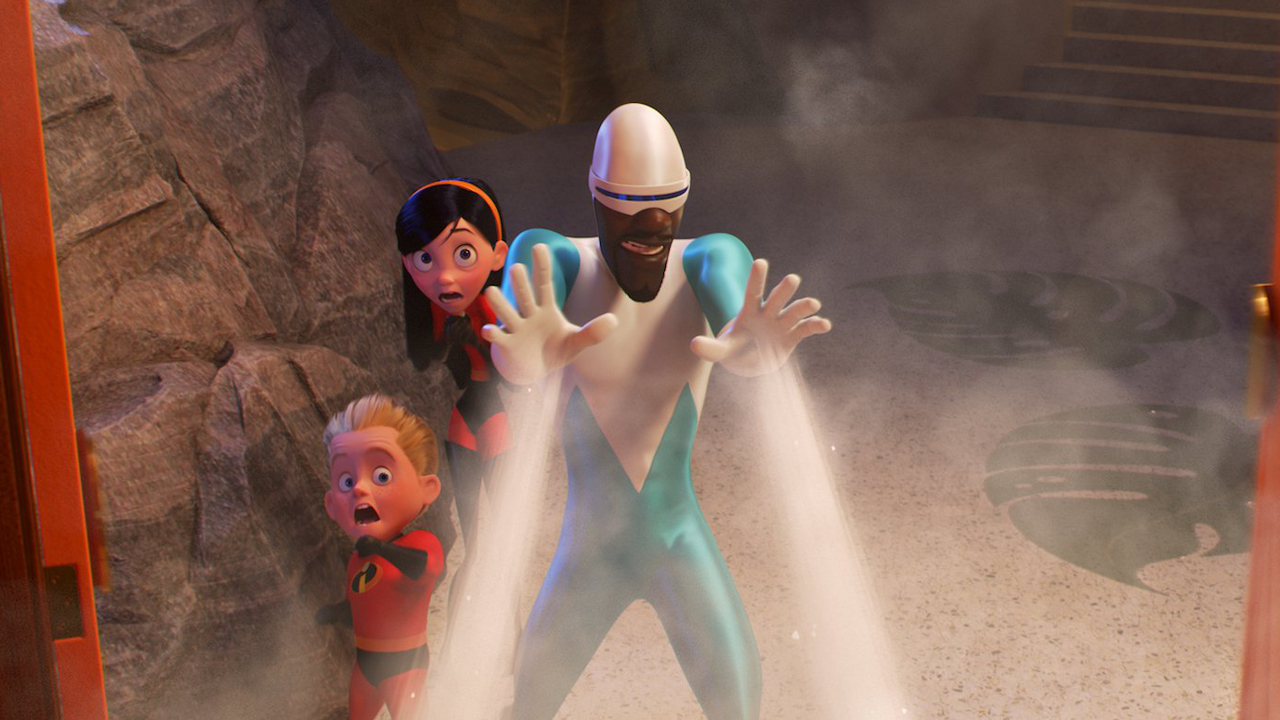 Since 2010, Pixar’s been more focused than ever on developing franchises rather than original content. Prequels and sequels have accounted for the studio’s last six out of 10 feature films. Next June’s Toy Story 4 racks that total up to a whopping seven. And while the necessity of some recent additions to the line-up have been questioned, there’s just one sequel question that hasn’t vanished for nearly 15 years. Fear not, Incredibles 2 has finally arrived in super fashion.

While the 2004 release of The Incredibles seems like ages ago, Incredibles 2 pays it no attention whatsoever. The sequel immediately picks up the action from the original’s cliffhanger. After a short-lived victory, The Underminer (voiced by John Ratzenberger) wreaks havoc with his giant drill as he attempts to rob the Metroville Bank. The Parr family and Frozone (voiced by Samuel L. Jackson) end up fending off the mole-like villain. Instead of being hailed as heroes, the politicians and media paint the supers in a negative light as result of the collateral damage. With the assistance of business-savvy siblings, Winston (voiced by Bob Odenkirk) and Evelyn (voiced by Catherine Keener), they work to regain the public trust once more.

Incredibles 2 is one of those rare sequels that isn’t shackled by the mantra “bigger is better.” There’s no profound world-building exercise, nor is it necessary here. Sticking to the plot points it knows ever so well, Incredibles 2 excels better as the second half of an overarching superhero narrative. The catch here is the role reversal between Mr. Incredible (voiced by Craig T. Nelson) and his wife Elastigirl (voiced by Holly Hunter). The last time around, focus was centered around Mr. Incredible reclaiming the glory days of superheroes by undertaking exotic, yet perilous missions. Incredibles 2 instead transforms Elastigirl into the poster girl for the “Make Supers Legal Again” movement. Mr. Incredible gets to play Mr. Mom. It’s no easy task juggling Common Core tutoring, dealing with teenage angst and caring for a baby with a grab bag of super powers.

Director Brad Bird hasn’t lost a step since 2004. Did anyone have any doubts after Bird helmed Ratatouille, Mission: Impossible – Ghost Protocol and Tomorrowland in that 14-year gap? Of course not. But while Bird’s screenplay doesn’t tug its hardest on the heartstrings or bring on the waterworks like Pixar’s other achievements, Incredibles 2 rests on nearly two hours of slick entertainment. For every set piece where Elastigirl saves a runaway monorail from the hypnotic clutches of the villainous Screenslaver, Bird switches back to more laid back domestic antics at home. The family dynamics between a sleep-deprived Mr. Incredible and his three super children are delightful asides from the action. Though it’s infant Jack-Jack (voiced by Eli Fucile) where Bird and company get to tinker with the most as the film’s breakout star. Except for one fly-by moment, there’s no resorting to any sort of toilet humor with the pint-sized super.

Incredibles 2 flies high in the technical department. Aesthetically pleasing, the visual details have greatly advanced since 2004. Action sequences like the monorail sequences are offered new ways to flourish without ever feeling overblown. Even with 2018’s technical tools at the filmmakers’ disposal, there’s no temptation to widen the scope without purpose. Watching The Incredibles and Incredibles 2 back-to-back is a seamless accomplishment to itself. Accenting the light-hearted tone is Michael Giacchino’s 60s-esque score. The Coco composer returns once again to score Incredibles 2 with yet another round of jazzy flair.

Expectations were insanely high for the eventual release of Incredibles 2. Thrust into a loaded age of superhero cinematic universes, Incredibles 2 retains the simplicity and charm that made the first film work back in 2004. It’s a crowd-pleasing companion piece to the original that’s almost as super. 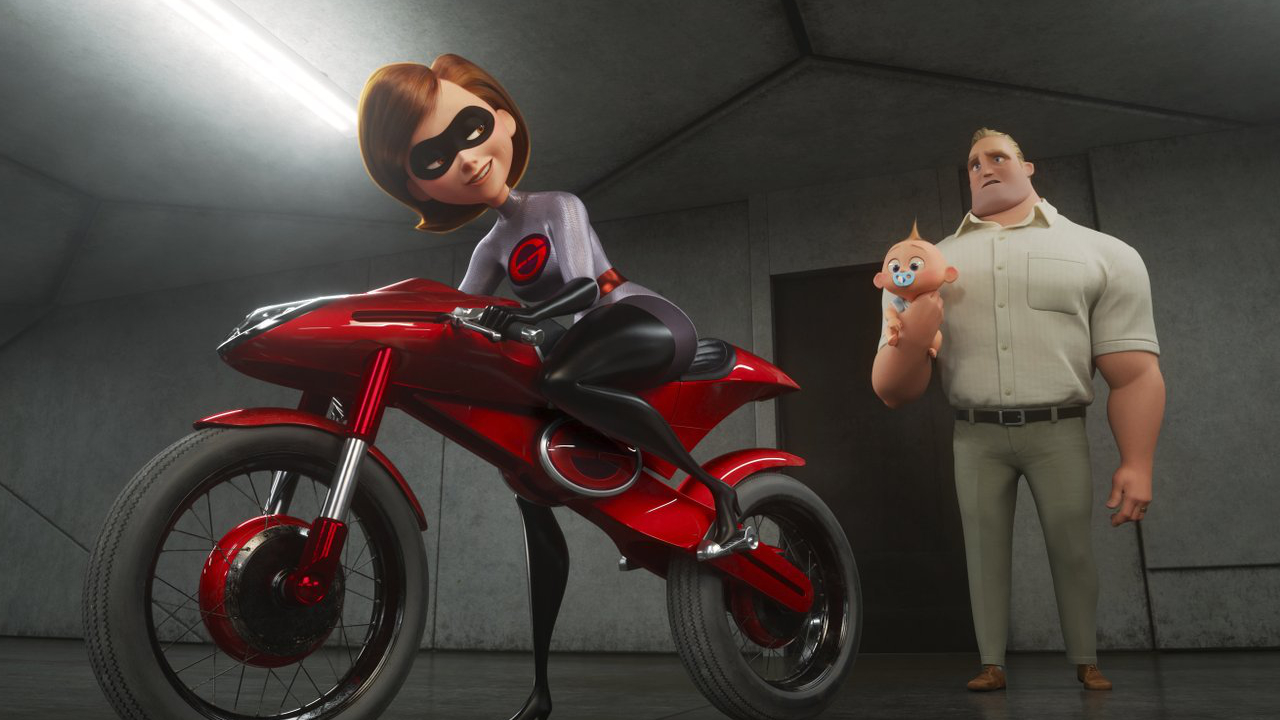 Like The Incredibles 4K UHD release earlier this year, Buena Vista Home Entertainment offers a perfect respectable transfer for both the 4K UHD disc and Blu-ray disc. The 2160p transfer on the 4K disc yields a much darker color palette than its Blu-ray counterpart. Utilizing the HDR, colors are more natural on the 4K, popping less than the 1080p version. The sequel is lightened up slightly compared the 2004 film. It’s a more visually welcoming experience for this second outing. Blacks are solid throughout. Detail to clothing and facial textures are paid a great deal of attention. The Blu-ray reaches near the limits of that format, leaving much of the detail level more to the 4K UHD disc. One thing to note is a certain sequence involving the Screenslaver and flashing lights may affect some viewers.

The 4K UHD copy of Incredibles 2 supplies various audio options to immerse yourself in. That includes: English Dolby Atmos, English 7.1 Dolby Digital Plus and 2.0 Descriptive Audio, Spanish and French 7.1 Dolby Digital Plus Language tracks. The Blu-ray disc offers options of English 7.1 DTS-HDMA and 2.0 Descriptive Audio as well as both Spanish and French 5.1 Dolby Digital Language tracks.  Audio is evenly balanced throughout the feature. The film’s key set pieces shine with the roars of the Elasticycle or the rumblings of the Parr’s long-lost super car, the Incredibile. Audio cues from various superpowers including Frozone’s icy blasts, Dash’s super speed or Violet’s force fields are crisp attentions to detail. Dialogue doesn’t miss a beat either, retaining a coherent level.

In Buena Vista fashion, supplements continue to be housed on the Blu-ray disc rather than the 4K UHD one. The bonus material is split over two discs. On disc one, viewers can watch Bao, a poignant Pixar short, shown immediately before Incredibles 2 in theaters. Another short called Auntie Edna features the lovable fashion designer and Parr family confidante, Edna Mode. Strong Coffee: A Lesson in Animation with Brad Bird catches up with the cast and crew highlighting writer-director Brad Bird. There is also audio commentary as well on the feature Blu-ray disc.

Disc two delves deeper into Incredibles 2, including a slew of deleted scenes and commentary from Bird. Heroes & Villains spends nearly 30 minutes on the cast and crew discussing the various characters of the film. Super Stuff, Paths to Pixar: Everyday Heroes, Superbaby, Ralph Eggleston: Production Designer and Making Bao add another 30 minutes of behind-the-scenes content. A couple of trailers round out the supplemental materials. Despite a consistent trend of Blu-ray supplements, this is one Buena Vista’s better releases as of late.