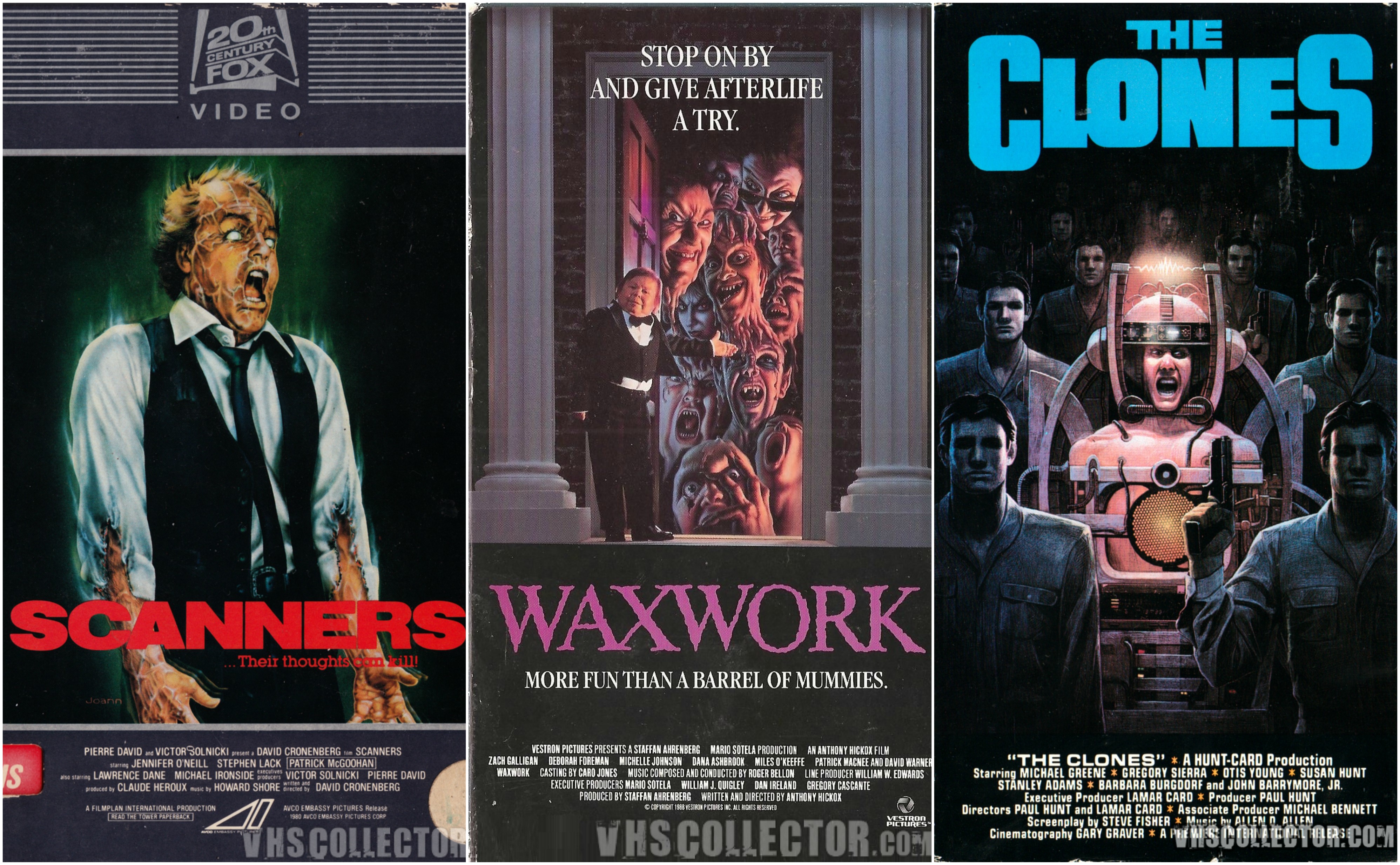 Long before I matured into the passionate (and obsessive) cinephile that I am today, one of my favorite past times as a kid was browsing the horror isles at either of my local video stores. Like many, I was entranced by the eerie, lurid, and creepy artwork displayed upon the VHS boxes. With no context of the plot or synopsis, I could only wonder what any of these films could possibly be about, while the stills on the back cover offered only morsels of context. As naïve as some of these scenarios were, they perfectly channeled the fears of childhood, such as loved ones (specifically parents) becoming monsters or being trapped and alone with nowhere to run or anyone to help. Sometimes just staring at these covers and pondering the narratives conjured by them was like gazing into a dark abyss where all our most chilling fears reside. If a particularly grotesque or frightening visage graced the cover it sometimes gave me the sensation of what it might be like to be face-to-face with such a monster. As I grew older my curiosity for horror quickly became a passion from Scooby Doo, Where Are You? to the works of Carpenter, Romero, Band, and many others. Presented here are five VHS covers from my childhood—films I would eventually see later in life. I will evaluate the cover illustrations in terms of their art design and overall effectiveness in conjunction with the impressions they left on me when I was young, followed by a brief synopsis and critique of each film. 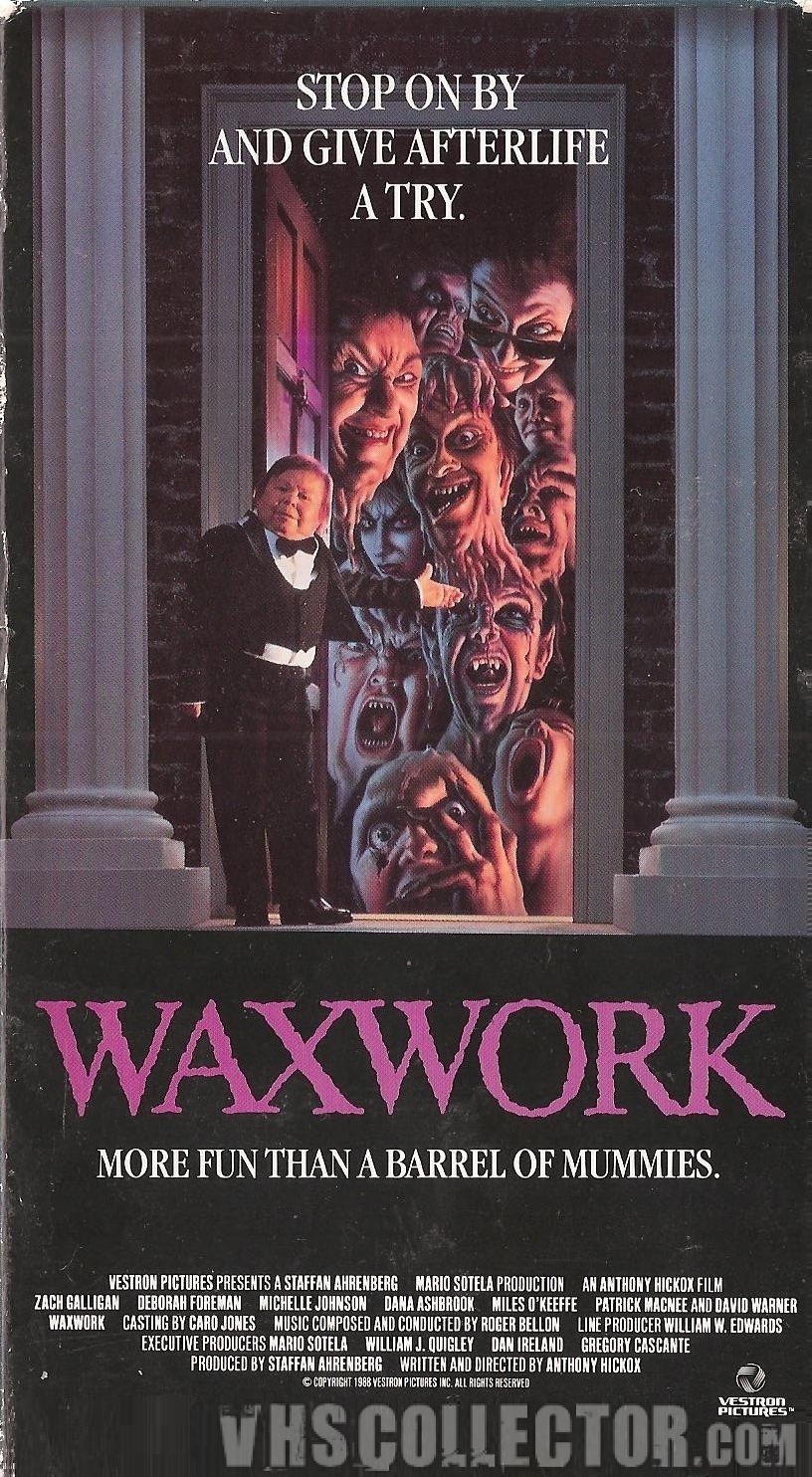 Waxwork concerns a group of friends played by Zack Galligan (Gremlins), Deborah Foreman (Valley Girl), Dana Ashbrook (Twin Peaks), and Michelle Johnson (Blame It on Rio) who begin to fall prey to the ghastly exhibits of a wax museum—each one a portal to a small piece in time occupied by an icon of fright. But the museum’s curator (the legendary David Warner) has an even more sinister plan in the works. Writer/director Anthony Hickox (Hellraiser III: Hell on Earth) crafts a foreboding and imaginative love letter to the classics of horror cinema (Dracula, The Wolfman, The Mummy) with a ‘80s sensibility. Also worth noting is Roger Bellon’s lush score and J. Kenneth Campbell’s dastardly villainous performance as the Marquis de Sade. 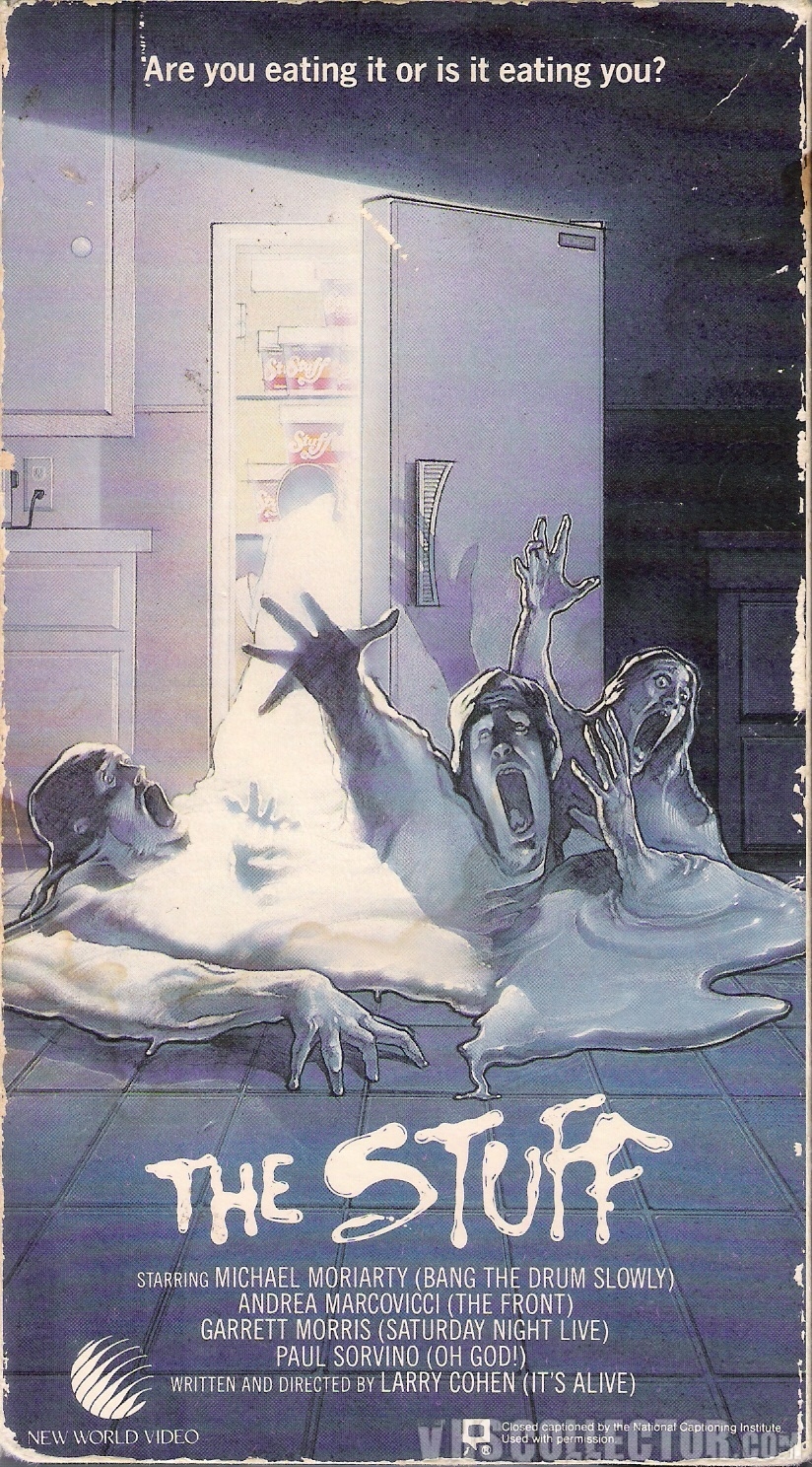 The Stuff concerns a sensational new dessert product of the same name that has taken the nation by storm and has the competition baffled as to what it is and what makes it so popular. Michael Moriarty (Law & Order) stars as an industrial saboteur who uncovers a conspiracy that is all but sweet and Scott Bloom as a young boy whose family’s addiction to the stuff has them acting more than a little strange. With the help of an adverting executive and a renegade group of soldiers, they must warn the nation before it is too late. Writer/director Larry Cohen (It’s Alive, Q: The Winged Serpent) crafts an over-the-top horror/comedy satirizing consumerism and raising questions regarding the food industry long before such films as Super Size Me and Food, Inc. The Stuff may not quite live up to its nightmarish cover art but offers enough gruesome gooeyness to satisfy one’s craving. It may be flawed, but it is still a worthy horror film as well as a personal favorite. What can I say? “Enough is never enough.”

For those unfamiliar with Tobe Hooper’s landmark piece of cinema, the film tells of a group of vacationing friends who run afoul of a cannibalistic family in the arid Texas countryside. There is little to say that has not already been said. Simply put, the film is a seminal masterpiece that still manages to shock and disturb, while the raw documentary style lends tremendously to its overall effectiveness. 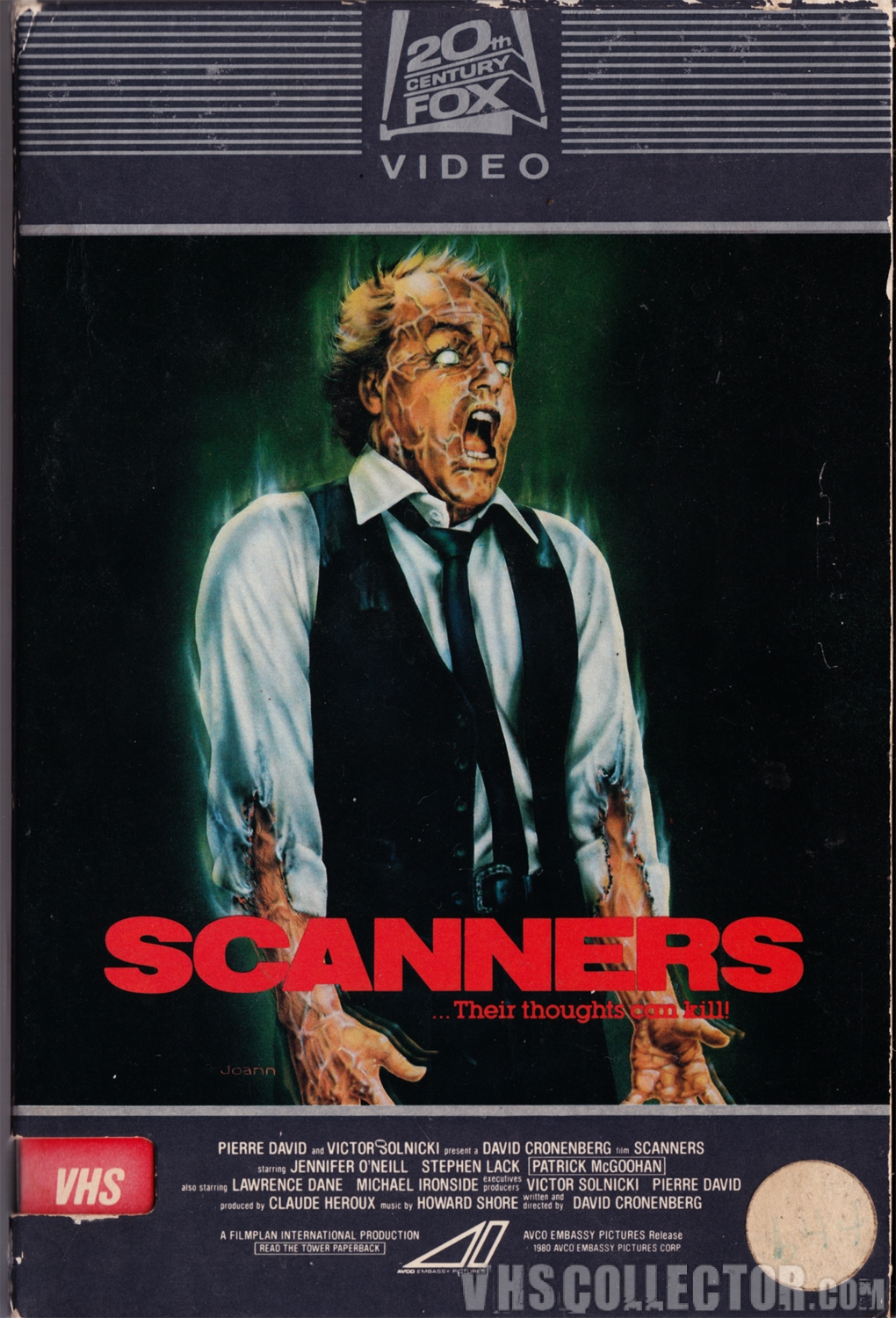 The film concerns a small minority of people with telepathic, telekinetic, and mind-control powers known as “Scanners.” A private security firm called ConSec has acquired the use of scanners as a potential new weapon, but find themselves under assault by rogue scanner Darryl Revok (genre vet Michael Ironside). The company dispatches a scanner of their own (Stephen Lack) to do battle with the deadly Revok. Written and directed by David Cronenberg, Scanners is a highly regarded classic within the horror genre. Admittedly, I felt underwhelmed when I originally saw the film (I did love the exploding head!). However, I have matured a great deal since my initial viewing and as with many films, my opinion has changed for the better over time. Scanners is definitely ripe for a revisit from this writer. 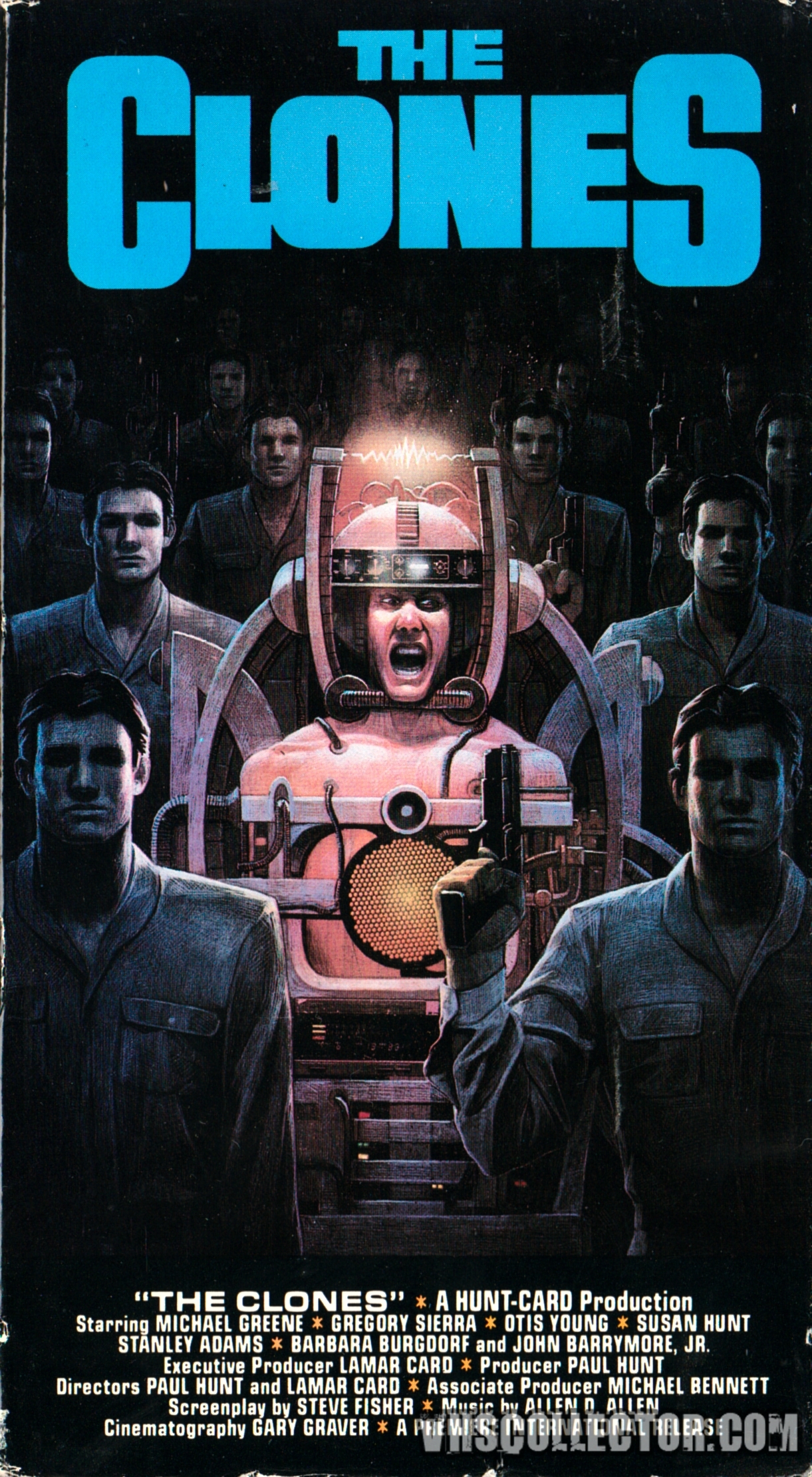 Unfortunately, this wonderfully chilling artwork reflects the film in only the faintest sense. The Clones is a low-budget action/sci-fi film about a scientist who discovers he has been cloned and is being pursued by government agents. Along the way, he uncovers a conspiracy of even greater proportions. For every VHS cover, that (more or less) lived up to its film and vice-versa were many misleading covers that suckered the viewer into watching something mediocre or something atrocious. The Clones may not be great, but it certainly isn’t bad. My initial judgment of the film was hindered by the fact that it was not the movie I thought I was going to watch. In that respect, the film needs to be revisited so that I may evaluate it on its own terms, rather than those of the art. However, I am still wanting a film reflective of that chilling artwork.

In an age overwrought with streaming and on-demand services, there are many like myself who yearn for the days of visiting the local video store in search of that special gem to take home and slide into the VCR. We yearn for the days of gazing upon gloriously hand-illustrated film covers and not something that was made in Photoshop. Do you have any similar memories regarding VHS artwork and the video store experience? Let me know in the comments below. I would love to read them!

Special shoutout to VHSCollector.com for all the awesome photos used as part of this article.