The upcoming heist movie Ocean’s 8 has me excited for a number of reasons, and this latest trailer only enhances that sentiment.

The general premise of the movie starts with Sandra Bullock as Debbie Ocean, sister of Danny Ocean (played in the original Ocean movies by George Clooney). Apparently, she is in the same heist game as her bro and has had to spend some time in the slammer for it. Now she’s out and has been planning a way to either get back at someone or regain her stature by executing the next perfect heist. The target? The Met Gala, the swanky annual fashion NYC event that brings out all of high society’s bigwigs and celebs – and diamonds. Lots and lots of diamonds. Debbie has to assemble the right crew to pull it off, and signs up Lou (Cate Blanchett) to help her find them. Let the games begin.

Here are five things about it that have me saying, “Oh, hell yes”:

1. Sandra Bullock and Cate Blanchett. Together. Period. I’m not sure if their characters are best friends, like Danny and Rusty (played by Brad Pitt), or if just former heist buddies. But seeing the two actresses interacting as such is going to be great. I just know it.

2. Rihanna as a computer hacker/tech expert just makes me smile. For all the slams against her attempts at acting, I’ve always thought the singer brought a little something the things she’s done. Seeing her in this capacity, however, she might finally shut down the naysayers.

3. The rest of the all-female cast, actually. It’s just a stellar ensemble. Along with Bullock, Blanchett, and Rihanna, there’s Sarah Paulson, Mindy Kaling, Awkwafina, Anne Hathaway, and Helena Bonham Carter. Judging from the trailer, I can already tell that I’m going to love Paulson and Carter.

4. Seeing them all dolled up for the Met Gala. Also, from the IMDb page, it looks like a lot of celebs will be playing themselves, even Kim Kardashian is listed. Of course, she is. She never misses the Met Gala.

5. Speaking of cameos, we’re definitely going to see stars Matt Damon and Carl Reiner, as their Ocean’s characters. Will Clooney sneak in there, too? One can hope.

Check out the trailer above and watch for Ocean’s 8 when it sneaks into theaters June 8. 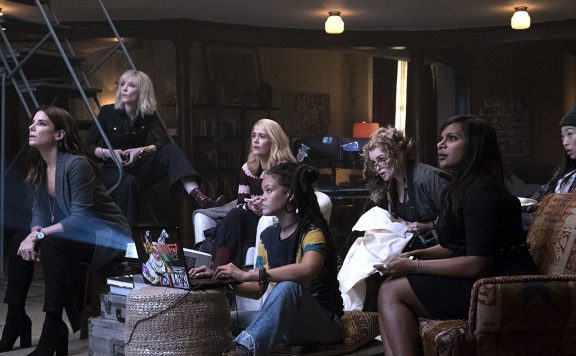 The upcoming heist movie Ocean's 8 has me excited for a number of reasons, and this latest trailer only enhances that sentiment. The general premise of the movie starts with Sandra Bullock as Debbie Ocean, sister of Danny Ocean (played i...
0
Average User Rating
0 votes
Please sign in to rate.
Cast:Anne Hathaway, Cate Blanchett, Rihanna, Sandra Bullock, Sarah Paulson
Director(s):Gary Ross