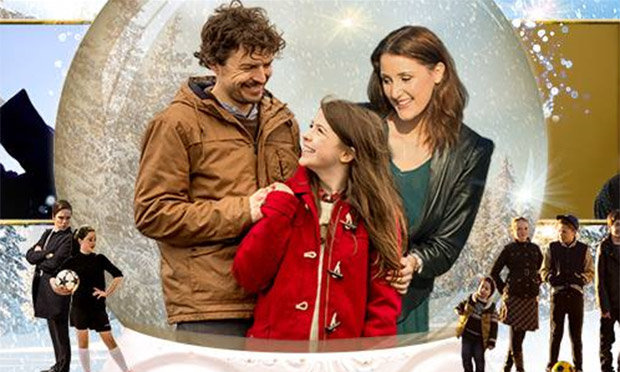 Hello there, lads and lassies! Today’s reviews takes us to Ireland where we come upon A Christmas Star. And as I’m sure you can guess…it does not lead to the Promised Land. (Is that what happened in the Bible? The North Star leads Jesus to the new kingdom, right? It’s where he finds the golden chalice so he can get into Night Rider to drive around and find the jade monkey before the next full moon, but then realizes it was in Night Rider’s glove compartment along with the road maps and the ice scraper. So he just drives home to find someone peed on his favorite rug and he was so angry because it really tied the room together! Jesus then goes out to steal his female neighbor’s dog so he can spend more time with her while they look for the dog, which then escapes from the backyard to join a basketball team and he’s so good that they DON’T EVEN CARE IT’S A DOG!)

What…where am I? Ah, yes, the movie with obvious and unneeded religious overtones staring a magic child that stars off with b-roll of glass blowing. This Bible film starts off with Maria and Joe driving through a dark and stormy…Christmas Eve? And, while Rudolph put on his rain boots, Maria (pregnant) begins to go into labor so they drive to a…sigh…stable and she gives birth to…sigh…Noelle…in the hay. DO YOU GET IT, GUYS?! SHE’S THE CHRISTMAS STAR! And because she was born on Christmas, she now has magical powers to calm down anyone who becomes angry because if you’re going to do a religious-themed film, you have to remember Jesus’ most powerful miracle was soothing an apostle’s rage when someone cut him off in traffic. That water to wine shit is for chumps.

We see Noelle grow up and there she is, making people un-angry even up until present day when she’s now 11 years old and is best friends with someone named Spud-Bob (and if you don’t constantly want to say “Spongebob,” you are a liar and a scoundrel). So, Spongebob-(DAMMIT!)- sees if she can perform other miracles besides calming people down, but no. No multiple bread loaves or water into wine which makes Noelle confused about why this is all happening to her and what it means. (Okay, maybe it’s a puberty allegory now). She asks her family to take her on a trip to see where she was born and when they head back to the stable, the woman who owns it (who was also there at the time of the birth) welcomes them with open arms! “Hey, Strangers-I-haven’t-seen-in-11-years, come on in unannounced! Can I take your daughter, alone, to the dark barn where she was born, without adult supervision? Cool!” You’re so weird, sometimes, Ireland. Anyway, after the trip and after multiple failed attempts of trying to convince her friends and family, Joe bellows at her to stop with this miracle nonsense because he has to concentrate on his snow globe factory shutting down.

I’m going to repeat that: Joe works for a SNOWGLOBE FACTORY which is apparently the town’s only export and means of employment for the residents and it’s about to be purchased by Pat McKerrod- this obviously-British-actor-playing-an-American who is totally evil and loves money and wants to turn the factory into a casino or golf course or burlesque house, I don’t know- I was like, 4 beers in at this point. McKerrod convinces the factory workers that he TOTALLY WON’T SHUT THE FACTORY DOWN and that if they just sign their lives away, he’ll give them checks for being totally cool dudes (you know, standard boiler-plate contracts). I will give this movie one funny line in which McKerrod’s son (who keeps tagging along on business trips for some unexplained reason) asks him why he hates this town so much and his reply was “There are two types of people in this world…and I hate them both.” I’m totally stealing this and using it forever.

Since Noelle’s friends and family don’t believe she’s magic AND she now knows about McKerrod’s real plans, she runs away to a mountain and is threatened by McKerrod’s son, Junior. Junior, along with his goons, warn Noelle not to say anything. Yay! Let’s threaten to assault a child, woo! Seriously, you’re so weird, Ireland. You also have that old stable lady living on the mountain so she can chase away the goons because WRITER’S CONVENIENCE! And no, if you’re wondering, Noelle’s magic doesn’t seem to work on McKerrod, his son, or their goons and there’s no explanation as to why.

1) JUSTIFICATION IN A SCRIPT

Eventually, her friends believe that she’s magic (see number one on My Christmas List) so they find McKerrod’s office and steal his laptop with his evil plan on it and run to some community/political type hearing to expose his plan! Why do the city representatives care? MAGIC! Why does Junior suddenly turn on his father? MAGIC! Why does a 12 year old boy find a clause in a very complicated contract that states McKerrod doesn’t really own the factory? YOU GUESSED IT, MAGIC! Lots of miracles to go around! Throw in cameos by Kylie Minogue and Liam Neeson and I suddenly feel calmed down watching this.

FINAL WORDS: In case you couldn’t guess the answers from the start of the quiz, it was Night Rider, The Simpsons, The Big Lebowski, Lost & Found, and Airbud. Thanks for playing!