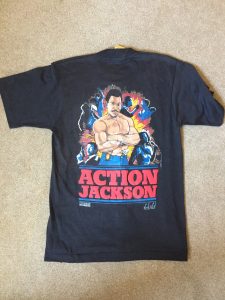 Today should be the 30th anniversary of the Action Jackson franchise. Carl weathers absolutely should have his own Die Hard or Lethal Weapon. That was certainly the idea, and $20 million gross on a $7 million budget should have been good in the ‘80s. I mean, remember when they made big movies for $7 million? But here we are and there is only one Action Jackson (yet there are five Highlanders plus a TV series, each one claiming there can be only one!)

Jericho Jackson’s legend is introduced before Weathers even appears. He’s the cop the patrolmen talk about to scare perps. That means the audience just can’t wait to see if he’s for real.

Dirty Harry was the edgy cop in the ‘70s. By the ‘80s, any productive movie cop was breaking the rules. Jackson has been demoted to sergeant on desk duty for nearly tearing a rapist’s arm off. Jackson’s response, “He had a spare.” I think the audience of the ‘80s agreed an arm was the least this creep could sacrifice. Today we’re just finally looking for longer term solutions to sexual assaults. But cops aren’t allowed to be executioners so he’s got to stop being Action Jackson to make lieutenant again. The title of the movie promises Action Jackson is back. 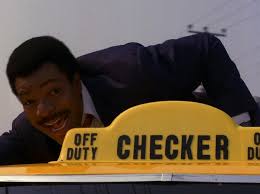 Action Jackson is some good old ‘80s stuntwork selling the illusion that Weathers is doing it, not just pasting his face on a stuntman’s body. Hanging on the roof of a cab is a great blend of hidden stuntmen and closeups of Weathers being towed and cracking one liners. Plus a truck gratuitously explodes in the background. Someone drove The Halley up the stairs while Weathers shot closeups in the driver’s seat. 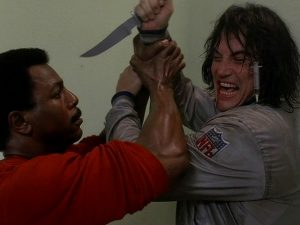 The deaths are gloriously excessive in true ‘80s fashion. Bad guys burst into flames, explode or get electrocuted just for making contact with a power grid (and still burst into flames). Some are impaled too. The violence had personality. Bad guys kept testicles in a jar. There’s a mise en scene way to tell Action Jackson his contact is dead!

Few movies are this honest in the title. Snakes on a Plane also told you exactly what it was about but is there a comedy called Hilarious Cornelius? Sexy movies always have cryptic titles like Basic Instinct or Fifty Shades of Gray. There’s no Nudey Judy. Well, maybe Showgirls delivered what it promised. 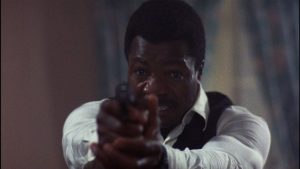 This was stuntman/coordinator/second unit director Craig Baxley’s feature directorial debut. He had a gold run of solid low budget but theatrical action with I Come in Peace and Stone Cold. I haven’t seen his film output since, but I’ve probably seen his TV episodes. Perhaps there were more Action Jackson’s for me to discover. 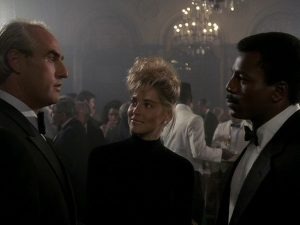 Produced by Joel Silver, the ensemble cast was full of his regulars. Good old Mary Ellen Trainor shows up at the beginning. Argylle himself, De’voreaux Wright, shows up.. This came out before Die Hard and was probably filmed first. Robert Davi plays a mere informant, and Al Leong is one of Dellaplane (Craig T. Nelson)’s henchmen.

Dellaplane is kind of all the ‘80s villains in one. He practices martial arts because what’s even more evil than a corrupt yuppie businessman? One who can kick your ass, and breaks his own trainer’s arm because he’s just a dick. They make sure to get Weathers’ shirt off so you can see how buff he is. 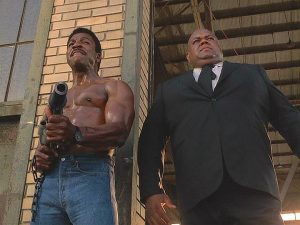 I feel like Action Jackson was monumental for 1988 cinema. It’s a black hero, love interest, good guys and bad guys in an otherwise white genre with no comment. They weren’t trying to do Shaft. They wanted another Dirty Harry. It would only really be accepted when Wesley Snipes started leading action movies in the ‘90s. 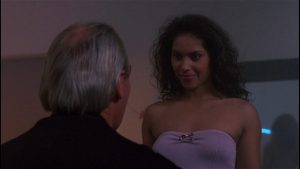 It was a vehicle for Vanity to sing too. She plays Dellaplane’s mistress Sydney, a singer at his club he’s got hooked on smack, who aligns with Jackson. So you get action, some funny one-liners, music and some sexiness from Vanity and Sharon Stone as Dellaplane’s poor wife. How many movies today give you a total package like Action Jackson? 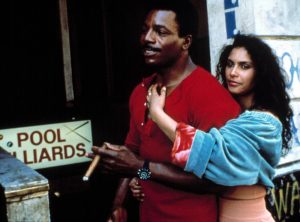 Action Jackson is not entirely progressive. ‘80s homophobia still creeps in. Sydney accuses Jackson of being queer or a cop for not making a move on her. So it’s 50% homophobia, and the latter is why he’s not interested. He gets her clean though. Some thugs are gay too and they’re formidable, but still portrayed as deviant. While not as overt as the likes of Tango & Cash, it’s a harsh reminder that there was still a long way to go.

There should’ve been many more adventure of Action Jackson. All it would take is a new case in every sequel and get to see Jackson spring into action. Have you seen Weathers today? He could still do it, but we truly missed out on Action Jacksons four, five and six.