Miss Sloane stars Jessica Chastain as Elizabeth Sloane, a lobbyist with a record for being the most ruthless and coldest lobbyist in Washington. She works for an old-school lobbying firm until Rodolfo Schmidt, representing a smaller firm, Peterson Wyatt tries to recruit her to help with getting the Heaton-Harris Bill passed. This bill would require stricter gun control laws and universal background checks for those trying to purchase guns. When she leaves the first company, she tries to bring people from her team with her. Once she is working with the boutique firm Peterson Wyatt, Liz takes the reigns and starts manipulating those around her to bend to her will. We don’t realize how twisted and warped her mind really is and how it works right until the very end of the film.

The film has superb writing. The story is incredibly engaging and entertaining. While the political theme may be difficult for people to get into, the film quickly grabs you by your shirt collar and drags you in. The sharp writing and storytelling work with stellar performances to create a wonderful film. The film starts off rather slow with some minor pacing problems but quickly redeems itself as it pushes through the first act. The film is constructed in a way that switches you back and forth between the near past and the present day situation in which we find Liz. These transitions are perfectly edited and placed to create the ultimate suspense and impact. The film so craftily gives so much information to the audience in a short amount of time. I credit that to great writing and filmmaking. Taking a subject matter that can be very dull and boring, like lobbying, and giving it life and excitement is no small feat. 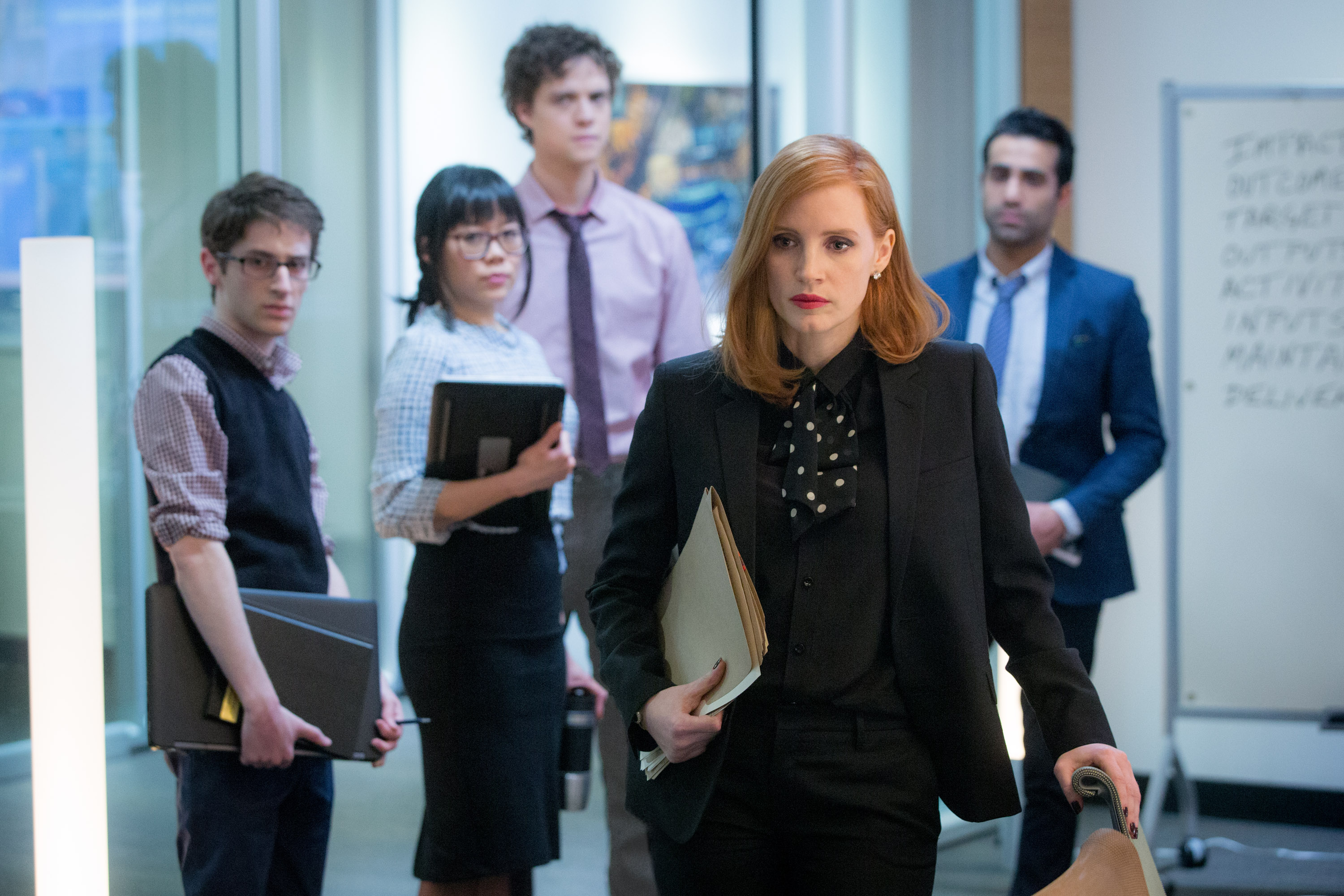 Jessica Chastain’s Oscar-worthy performance will leave you stunned. She is such a delight to watch in this film. Jessica Chastain’s Liz is an extremely flawed person who is driven to an obsession with success and winning. While the film gives no mention of it, we sense that her drive is fueled by something deeper within her. Whether that is a drive to succeed as one of the only females in her position or something from her past that drives her forward. I find the character fascinating and was mesmerized by the performance.  All around, this cast is all-star. Gugu Mbatha-Raw is stellar as Esme and the rest of the cast is exceptional and gives spot-on performances. If you are a fan of the show Newsroom, then this is a must-see film. It brings excitement to politics.

The story is eye-opening and incites outrage when exposing the unbelievable unethical backroads of politics and lobbyists on Capitol Hill. It is an insider’s look at how even the best intentions must be manipulated and contorted into something ugly and unethical in this broken political system in order to get anything done. This film, while not perfect, is a thrilling peek into the political underbelly of American politics that is worth a watch.

AFI Fest 2016 Review: Miss Sloane Miss Sloane stars Jessica Chastain as Elizabeth Sloane, a lobbyist with a record for being the most ruthless and coldest lobbyist in Washington. She works for an old-school lobbying firm until Rodolfo ...
0
Average User Rating
0 votes
Please sign in to rate.