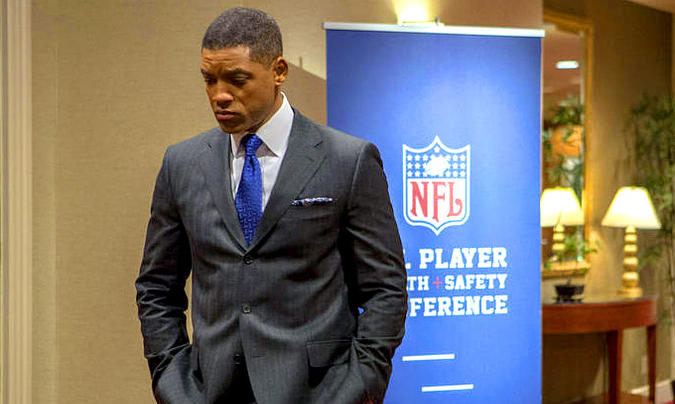 Concussion is the latest film starring Will Smith, Gugu Mbatha-Raw, Alec Baldwin, Albert Brooks and directed by Peter Landesman. The film centers around Dr. Bennet Omalu, the Pittsburgh based pathologist, who discovers the devastating effects that repeated head trauma of football players, is ruining their brains and can be deadly. He refers to this new discovery as CTE (Chronic traumatic encephalopathy). Dr. Omalu is a Nigerian immigrant who lives a simple life and loves his work. He is a God loving man and through the church, meets Prema (Mbatha-Raw). He is asked to give her a place to stay since she is new to the country. Of course, they fall in love and get married. Throughout the story, Prema gives Bennet immense support and love. She is in many ways a huge part of his strength and determination.

The story of Dr. Omalu is inspiring and incredible. Dr. Omalu took on the giant corporation of the NFL in pursuit of the truth. He was told so many times to stand down and to stop his research, but he always stood strong and even when he stopped fighting, did not retract his research. His boss, Dr. Cyril Wecht (Albert Brooks) supported him through these endeavors, even when faced with punishment himself. His character also offered much of the comic relief in the film. Dr. Julian Bailes (Alec Baldwin) was a former Doctor for the NFL, and left the NFL after years and supported Bennet. He could no longer hide what was happening to these players. The effects of CTE are very devastating. Men begin losing their minds, hearing voices, becoming violent and unlike themselves. It is very upsetting and people really need to know about it. 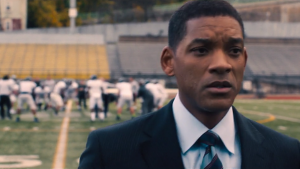 Will Smith’s acting is on point in this film. He is inspirational and transformative. It is often difficult to see such a famous actor in a film, because you tend to just see this actor, but in the first minute, Will Smith melts away and you see Dr. Omalu. His mannerisms and accent are the complete package. He is gut wrenchingly emotional and convicted that he must get the truth to the people. He is concerned not with his notoriety or himself, but the well being of others and the pursuit of the truth. Albert Brooks is great in this film. As I said, he offers the comic relief in the film with brutal honesty and blunt retorts. Gugu Mbatha-Raw is stunning and wonderful. Alec Baldwin was very intense and enthralling but I had problems with his Southern accent that would come and go in the film. He was supposed to be from the South but often, the accent would disappear and then reappear.

The choice of the director to use football images and clips in the film was very impactful. The clips used at certain parts of the film were used to make a point. That point sometimes was the painful and devastating impact of head trauma and some of it was to show the actual beauty and grace that exists in football. He did an impeccable job of handling the subject matter, not by denouncing football at all, but showing the dangers with the beauty. It is not a judgmental film. It is not preaching abstinence of football, but rather presents the information to the audience and accepts that it will do with it what it wants.

The result of all these factors of great acting, directing, humor and love of football is an incredibly beautiful film that can be appreciated by all. It is not just for film snobs and not just for avid football fans, but something that can join both groups. It can educate and inspire the masses and hopefully enact some change. It brings Dr. Omalu and his love for America and his fellow man to the forefront of the movement for change.