Peter Berg and Mark Wahlberg came out with two movies based on real life tragedies this year. Patriots Day is just as good as Deepwater Horizon and completes the trilogy of real life stories they began with Lone Survivor. 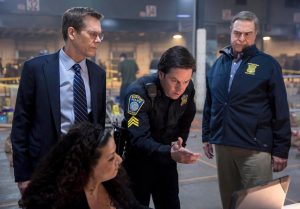 Tommy Saunders (Mark Wahlberg) is assigned traffic duty at the 2013 Boston Marathon. When the bombing occurs, he is thrust into the rescue and investigation, along with FBI Special Agent Rick DesLauriers (Kevin Bacon) and Boston Police Commissioner Ed Davis (John Goodman).

Patriots Day captures the confusion of the bombing and its aftermath, but also highlights the organizational forces of law and medicine that push through. It’s a lot of men screaming but it’s understandable. There isn’t a lot of time to convey this information, and as the FBI and Boston PD argue, both sides make sound cases and respect each other. 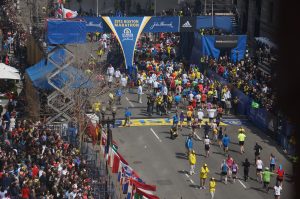 It’s suspenseful even though we know the outcome. I certainly didn’t know which cops and civilians lived. Every situation is dangerous for them. Showing the carnage of the bombing is what needs to be shown to convey the tragedy of this event. There are graphic wounds presented sparingly, but it’s more the details of the medical wrappers and unattended babies that drive it home.

Berg makes sure to respect the real victims so Patriots Day is not exploiting them for awards attention and box office. There is a bit of rah rah Boston coming together, which is good for the spirits but always attention paid to real people who died, both in the film and after.

The script gives us a fly on the wall perspective on the interactions of people involved, as if we’re seeing the private side they wouldn’t show to the public. Certainly seeing Chinese delivery boy Dun Meng (Jimmy O. Yang) on a first date feels real, as he becomes a more integral part of the story later. The college students are a bit on the nose, feeling unnatural as they just get the words out to convey their role in the story.

The bombers Dzhokhar (Alex Woff) and Tamerlan Tsarnaev (Themo Melikidze) are portrayed as a serious threat, as is Tamerlans’ wife Katherine Russell (Melissa Benoist) in a chilling turn. 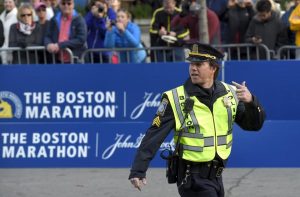 All the performances feel real. Perhaps this cast have all played various cops enough that we take it for granted to believe them in roles of authority, but there seems to be enough of an authentic touch specific to this situation to convey the docudrama film.

Berg’s films make a strong case for documenting recent history on film. We can watch all the news we want, and most of us don’t, but a film can give us an intimate perspective that even the best news cannot. Of course, a narrative filmmaker always takes a side, but Berg has been wise to choose the perspective of people without overt political interest in all three films, who end up doing the right thing regardless of the forces around them.

Peter Berg and Mark Wahlberg came out with two movies based on real life tragedies this year. Patriots Day is just as good as Deepwater Horizon and completes the trilogy of real life stories they began with Lone Survivor. Tommy Saunders (...
0
Average User Rating
0 votes
Please sign in to rate.