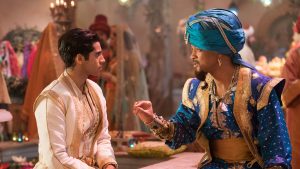 Will Smith is the Genie and Mena Massoud is Aladdin in Disney’s live-action ALADDIN, directed by Guy Ritchie.

Aladdin sure is a Fresh Prince Ali. It has a lot of fun with the animated classic in a live-action context and by casting middle eastern actors, gives Naomi Scott, Mena Massoud and Marwan Kenzari a well-earned breakthrough showcase. Everyone wins because they get the platform and we get to experience their talent. 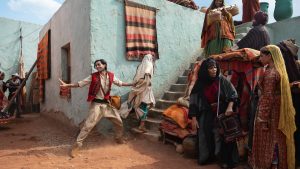 Of the famous Aladdin scenes, the market chase is clear and comprehensible, something we unfortunately cannot take for granted in 2019 or even from Guy Ritchie movies. This one is probably the best musical action scene since Hudson Hawk. The speed is a tad wonky but they made us see it in 3D so I’ll assume the 3D had something to do with that awkward effect. 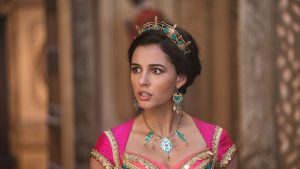 Jasmine’s feminism gets more of a platform in this adaptation. She points out the salient point that princesses are always described by their beauty and princes aren’t, yet they have the exact same position.

Will Smith is naturally going to improvise differently than Robin Williams did. That’s something you just have to accept as Williams is no longer with us. I wonder if the visual effects artists added anything based on Smith’s improvs like the animators did for Williams. Either way, “Friend Like Me” mixes surreal Genie effects and dance choreography, and there are more fun sensory overload gags throughout the film. The VFX artists go wild. 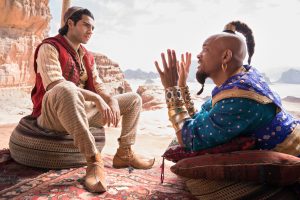 Mena Massoud as the street rat with a heart of gold, Aladdin, and Will Smith as the larger-than-life Genie in Disney’s ALADDIN, directed by Guy Ritchie.

They build into this one that Genie can change form so he can look like handsome non blue Will Smith in some scenes. They really don’t rely on that too much. He’s blue Genie for most of the movie.

As Smith though, Genie is also Hitch to Aladdin, even down to helping him dance. Smith is really good at that though because he’s wise without being smarmy and judgmental. There’s been a whole generation of kids since Hitch anyway so it’s good for them to learn about the dangers of lying in a relationship and that the best “game” is to be yourself. 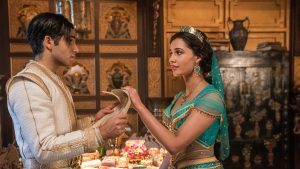 I know this isn’t Massoud, Scott or Kenzari’s first Hollywood roles but it gives them a showcase for triple threat talents. They sing, they dance, they do comedy, romance and action. When Scott belts out “Speechless” she claims the most memorable number in a show who’s songs we’ve all been singing for nearly 30 years. 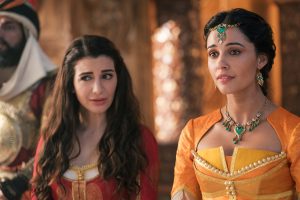 Aladdin is a tad longer than it needs to be, but only by about 10 minutes or so. Some business early on where Jasmine (Scott) and handmaiden Dalia (Nasim Pedrad) do schtick about switching roles only adds minutes to the story. Some extra business in the third act doesn’t make it any more powerful than when they stick to the animated climax, but those are the only issues.