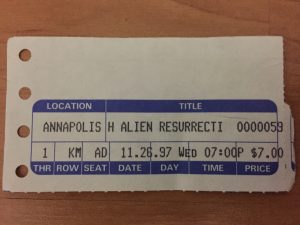 20 years ago, I wrote a review of Alien: Resurrection for my college newspaper. I have waited 20 years to review it again and defend it after it underperformed and has been considered bad ever since. I considered it a redemption from Alien 3, which I didn’t and still don’t dislike, but was a come down. In fact, I think Alien: Resurrection is the second best Alien. 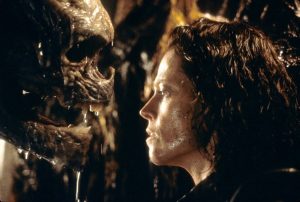 Alien only needed a single alien to take out the whole Nostromo crew. Being the first time they, or audiences, ever encountered a xenomorph, we were all discovering how formidable the monster was. James Cameron created a swarm of Aliens, making it more of a war movie against an alien army. Alien 3 tried to return to a single alien but Resurrection has a happy middle.

It’s back to the aliens stalking crew members on a ship, but there’s 12, not just one. That’s enough to be overwhelming but not so many it becomes like a video game with alien fodder. It allows the aliens to divide and conquer, and no place is safe when there are xenomorphs outside your periphery. 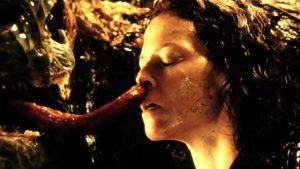 Alien: Resurrection adds the body horror of Ripley (Sigourney Weaver) discovering her new form. Since she’s a clone from the remains of Alien 3, she’s part alien now. She’s born at the beginning of the film so spends the movie effectively learning to walk again, which in this case means figuring out her enhanced strength and coming to terms with having acid blood.

The psychological impact on Ripley has remained compelling for me in two decades. Ripley doesn’t want to be back. She killed herself for a reason. Look at this week’s Justice League where they bring Superman back and it’s barely a character development. They have a green screen fight and then he’s better. Ripley reminds everyone through the entire movie that she resents being resurrected. 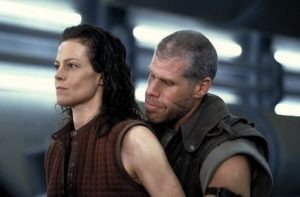 My favorite exchange is when Johner (Ron Perlman) asks Ripley what she did last time she ran into aliens. She replies, “I died.” Considering bravado metaphors action movies use to describe the threat (“it’s the size of Texas, sir.”), nothing’s more indicative of the insurmountable odds than “yeah, these things already killed me once.”

Even in an age where cinematic death means nothing, Alien Resurrection found a way to give Ripley’s rebirth meaning. She’s not back to continue the fight. She’s back to tell you it’s hopeless, and death isn’t even a way out since some jerks can always bring her back. By round 4, Ripley’s prognosis is bleak. “She’ll breed. You’ll die.” No one listens to Ripley. Everyone thinks they can control it. It’s the circle of life in an entertainingly cynical way. 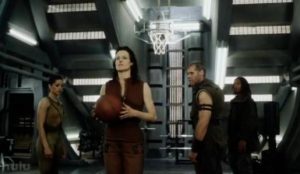 The basketball scene is just Ripley messing with a new crew because nothing matters anymore.

The alien hybrid doesn’t bother me. It’s supposed to be an abomination of inter species breeding. It should look awkward and messed up.

The Action: Get Away From Her, You Bitch!

Not even haters debate the underwater scene but there’s more great action in Alien: Resurrection. Once the aliens break out, the evacuation of the ship is intense, and hopeless when aliens get into escape pods. The tracking shot following a grenade into the doomed pod is definitely from the director of Amelie. You understand the geography of the ship as crew members rush towards the exits. 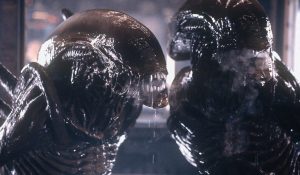 There’s action even among the aliens. They slaughter one of their own to use the acid blood to burn a hole through the floor. Gunplay involves cool ricochet shots and John Woo inspired double pistols (Woo had just made his third American film, Face/Off earlier that year.)

The underwater scene is both a horror and action scene. The aliens pursue at a steady old with both parties’ movement restricted.

Ripley teems up with a new crew of badass scavengers. They’re not quite the blue collar Nostromo crew. These are independent contractors simply out for the bottom line. The Captain (Michael Wincott) is just an opportunist making a deal with General Perez (Dan Hedaya). Hijacking and selling cryogenic tubes is pretty evil. Talk about anti-heroes.

Perlman is a hilarious dick. He knifes his paraplegic partner (Dominique Pinon) and makes Beavis and Butthead level innuendo about getting off. He’s also grammatically correct, declaring, “I am not the man with whom to fuck.” He grabs a soldier’s gun and hands it back. The gun doesn’t intimidate him. He’s making a point. He takes out an alien but gets freaked out by a spider. The man is full of contradictions.

Christie (Gary Dourdan) has guns attached to his arms. Winona Ryder and Kim Flowers add some more badass women to the Ripley’s legacy, and how progressive was it to have a paraplegic who’s completely capable, and they take every step to keep him with the group?

The alien kills are clever. They don’t just impale people. They use buttons and jump into life pods and set traps. The best is when awoken cryosleeper Purvis (Leland Orser) holds the villain’s head to his chest as the alien bursts out. 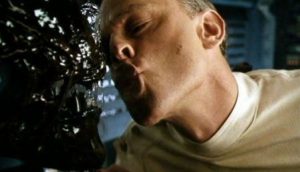 Joss Whedon says all his dialogue was delivered wrong but I don’t think we necessarily needed the postmodern, self-referential Buffy take on an Alien movie. The weird French version suits me just fine. Maybe Alien fans didn’t want a weird french version but I loved it. Gediman (Brad Dourif) is basically in love with the alien kissing it through the glass. 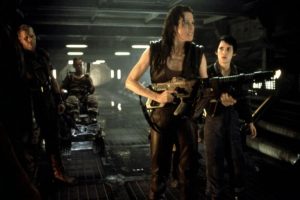 It’s a shame the Alien series did not continue with at least one more Ripley adventure. They went to all this trouble to bring her back, and now we don’t get to see what she does with this life. I’ve certainly been disappointed with the prequels, but ideas to retcon Alien 3 and Resurrection out and make a straight sequel to Aliens were disappointing too.

But that’s where I am now. 20 years ago, I thought Ripley was back. They’d made a great sequel to both Alien and Aliens and it had all the potential to send Ripley on more xenomorph hunting adventures.