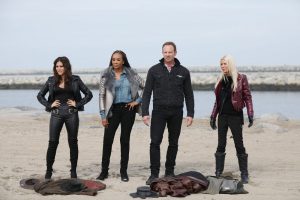 This is going to be a spoiler interview for people who have already seen The Last Sharknado: It’s About Time. Since we don’t want to spoil any of the surprises in any Sharknado movie, director Anthony C. Ferrante agreed to talk about this only if it posted after the film aired on Syfy, and Franchise Fred agreed. And if you’ve still got The Last Sharknado on your DVR, be sure to watch it before you read this second part of our Franchise Fred interview with Ferrante.

If you have watched The Last Sharknado: It’s About Time then you were surely touched to see footage of John Heard in the final scene of the saga. Since Heard passed away in 2017, he was never able to film new Sharknado footage, so Ferrante explained how he was still able to include Heard in The Last Sharkando’s full circle moment.

Franchise Fred: Did you use outtakes of John Heard from Sharknado 1? Is any of it footage we hadn’t seen before? 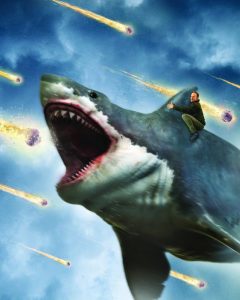 When we were at Comic-Con last year, John Heard passed while we were at Comic-Con. John Heard was a huge part of the first movie and he was a huge supporter before anybody. He supported this film. He was so into it while we were shooting it and he said a lot of really nice things about it. When Comic-Con happened right after the first Sharknado, he came down to Comic-Con and hung with us. It was like the best time because we re sharing this experience of everybody loving Sharknado.

He’s just such a nice guy, such a sweet man and it broke my heart when he passed at Comic-Con last year because we wanted him back for 6. We knew we were going to bring George back. It killed me. I was really upset at Comic-Con about it because he was part of our family. He was part of our phenomenon and because it happened at Comic-Con that we heard about the news made it even kind of worse. As we were talking about this, we were going, “Let’s try to find a way to use the footage of John.” We got permission from his daughter Annika who’s gracious enough to let us use his footage, to bless it because we just wanted it to be a surprise.

The thing that actually is kind of sweet, not even bittersweet, it’s kind of sweet about his appearance at the end of the movie is for all the stuff with them messing with time, with all the messing with their lives and how things change and how everything gets messed up and how they are different people, George is the one constant that never changed. He’s doing the same exact thing he did in Sharknado 1 in Sharknado 6 but the difference is there’s no sharknado. So he’s the same person and he’s still alive. That’s kind of cool. There’s something I think really sweet and poetic. He still takes his barstool with him but it’s not because there’s a disaster.

FF: You’d said you knew when you set up time travel in 5 that 6 would be the end. Did you always have this full circle moment planned? 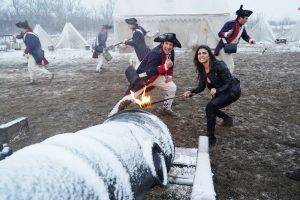 AF: Two movies ago I knew where I wanted to end the movie. That was going to be the bar. That was always the intent. I’m a big fan of Back to the Future so I like the idea of going back into our movies. Recreating that scene of Cassie but different, without the scar, I was kind of choking up when we were shooting it. It was like oh my God, we’re back here. We’re doing the exact same thing. We did everything to match the movements and the camera placement and everything for that shot. It was my love letter to the fans.

It was super important and it was very emotional making that happen and making that speech into the film. We’re literally talking to the camera. Even that last little bit with Al Roker, he basically sums everything up. I don’t think people realize this just yet. There will never, ever be anything like Sharknado again. Al basically says that at the end. We were found by the audience. It was not something that was purchased. It was not bought with advertisement. They just discovered us and they own us. We wouldn’t be here without the fans making this into something that went mainstream. 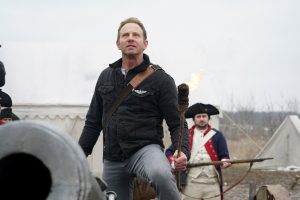 Yeah, we’ve had a lot of marketing, a lot of great marketing from Syfy starting from 2 to 6. They’ve done a bang-up job and put us out there and we’ve gotten huge because of it. But it all comes down to those fans. I wanted it to be for them. I wanted this movie to be, at the end of the movie, there was a lot of discussion that that scene goes on a long time at the bar. The audience earned it. At that point, if you tuned out, you weren’t a fan of the movie. You’re going to want to see how it resolves. Robbie [Rist] wrote a beautiful little song for the end, “Love is Stronger than Goodbye.” You hear a little bit of it as they’re walking out of the bar.

It’s been very strange, and going back to the smuggler’s ship was really cool. The other thing was people always kept asking, what does a smuggler ship have to do with the rest of the movie? Originally, it was just an intro. It was us doing a shootout on a boat in the middle of a sharknado which kind of set up what we did in subsequent movies. It didn’t have Fin because we didn’t know Fin at that point. So to be able to circle back around and now put Fin on the boat and make that boat significant and important, that was awesome. That goes back to the Back to the Future Part II thing where we’re kind of in the first movie again. I hope people that like the movie will appreciate that moment.

FF: What are some other Easter eggs we’ll talk about after the movie airs? 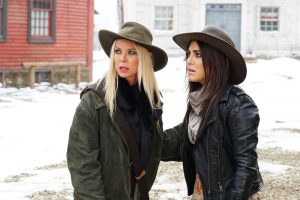 AF: We basically just gave in. Like in the second movie, we go, “Oh, you jumped the shark.” In this one we have a kitchen sink come out of nowhere and hit somebody. It’s like oh yeah, we’ve thrown the kitchen sink in here. The whole thing that happens at the end has to happen, and it doesn’t matter how big or ridiculous or insane it is, in order for the finale to occur where you can ground it, you just have to give into as much absurdity and insanity as possible.

Another thing that I’m really happy about, there’s incredible heart to these movies. That was always intentional. It was never about I’m a police officer, I’m a fireman or I’m a scientist and we’re going to stop these sharknados. It’s about a guy. It’s about Fin. It’s about this guy that got this huge ego because he was a surfer, screwed up his family and got a second chance. Each one of these movies has been about his journey. Within that is the journeys of some of the other characters.