When I was a kid I loved Back to the Future: The Ride, Star Tours and similar theme park rides where you sat in a box and got shaken along with the movie on the screen. I’d like to say I always imagined watching an entire movie that way but I don’t even think i had that vision. 4DX is that in essence but much more sophisticated. In addition to motion seats, the effects include air jets, mist, scents, lights and smoke to simulate the atmosphere of whichever film has been adapted to 4DX. Baby Driver is the best 4DX experience I’ve seen yet, and I also saw Mad Max: Fury Road in this format. 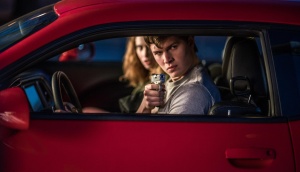 Baby Driver is already perfectly paced as a movie for the 4DX experience. It’s not wall to wall action, which would be exhausting. It eases you into the action scenes with gradual effects, and it’s not just Baby (Ansel Elgort)’s driving that makes the seats move. We also groove to his music choices, dancing and even making sandwiches in the kitchen.

The opening chase sets the tone for what you’re in for. The seats shake to the “Bellbottoms” beat, and sway to the music just while Baby is waiting outside the bank. An especially clever 4DX effect is synchronized to the windshield wipers, although he uses the wipers again later in the film and the effect does not repeat. Going uphill puts enough of a tilt in the seat to really feel like it’s a tough climb.

You smell the rubber as the chase squeals into action, and the seats move jus right o feel the turns. It’s not bombastic, although when the seat backs pound your back a few times, that can be jarring. 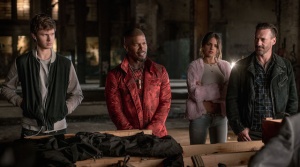 I knew the “Tequila” shootout would have the air jets whizzing bullets past your face, and it does. There were some surprises like when Griff (Jon Bernthal) knocks Baby’s sunglasses off. I thought I’d seen all the 4DX effects between Fury Road and San Andreas, but Baby Driver had some new tricks in store for me, like the air on your legs when Baby dodges cars.

The 4DX lights blink for the Sony logo, helicopter spotlight and the floodlights in Doc (Kevin Spacey)’s hideout. It does not flash for the red exit light or a few other occasions. If there were some missed opportunities, it seems likely that it was just too close to another big effect coming, and the 4DX choreographers are careful to make it an experience, not a gimmick. There is no simulation of Buddy (Jon Hamm) and Darling (Eiza Gonzalez) making out. You can’t put a price on that. 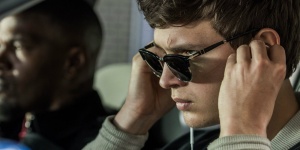 The 4DX theater still includes the incredible sound mix that director Edgar Wright and Julian Slater designed, where the levels of music modulate depending on who is hearing the song in the scene.

Baby Driver is a great movie to see in any format, because it is a movie first. The 4DX experience seems to understand that movie intuitively and treats the music as vitally as the fast and furious action. There won’t be a faster, more furious movie this year than Baby Driver, so don’t miss it in fast and furious 4DX.