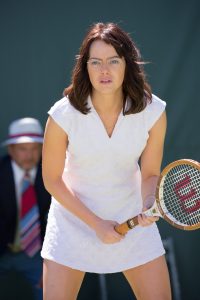 It’s easy to watch Battle of the Sexes from the right side of history. I think the film owns that perspective. It portrays the world of chauvinistic resistance to women’s liberation as an artifact of the past, but one from which we can still learn and understand.

Billie Jean King (Emma Stone) starts her own women’s tennis league because the United States Lawn Tennis Association will not pay women equal prize money to men. While on the road, King also acts out on her feelings for another woman, Marilyn (Andrea Riseborough) for the first time. Bobby Riggs (Steve Carell) decides to exploit the women’s tennis league by offering a prize to any woman who can beat him.

Riggs is completely exploiting the sexism for his own personal gain and self-promotion. Carell has a playful approach to it yet never denying that that he’s being an A-hole or making excuses. He’s like, “Yes, I’m a sexist A-hole. Let’s make money off it.” If anything, Riggs’ gambling addition is enabled worse than his sexism. Since he always wins, his relapses play as “that old scamp Bobby Riggs is at it again.” He’s a good foil because he’s entertaining but you want to see him lose. 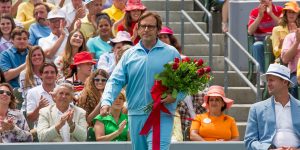 By contrast, Stone nails King’s stoic determination and fairness. She only calls out bad behavior. She’s not spewing accusations at her male opponents. She plays hardball off the court though. She bails on USLTA and sets the rules for her match with Riggs. Unfortunately, she could not be out yet. One victory at a time.

When Battle of the Sexes confronts the sexism of the time, it is the same old sexism but since it’s never gone away, it can always use restating. King articulates the problem and exposes how the men of tennis were threatened by just a little equality. 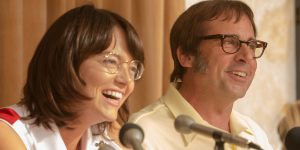 The tennis matches in Battle of the Sexes are full of exciting volleys and slams. There’s a good training montage too, contrasting Riggs’ silly PR stunts with King’s serious practice. The film is a tad too long and could get to the title Battle of the Sexes 10-15 minutes quicker, but it does get there.

Society didn’t learn to stop oppressing women from a tennis match and I don’t think they’re going to learn from a movie either. Battle of the Sexes is a good example for those still fighting that you can take the high road and win small victories. Thank you, Billie Jean King. Feminist Fred approves.