Don’t worry, I had realistic expectations for the new Nicolas Cage movie. Dog Eat Dog is one of his movies that will predominantly go straight to video with obligatory theaters but nobody really sees it in theaters. It might end up being great like The Trust but it could very easily be a bore like The Runner or Pay the Ghost. 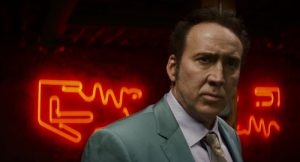 Troy (Cage) leads a trio of ex-cons including Mad Dog (Willem Dafoe) and Diesel (Christopher Matthew Cook) on drug robberies that they use to pay for their partying. When Troy thinks their next job could be big enough to be their last, it turns out to be their biggest problem yet.

Now the crime genre is full of “one last job” stories so I’m not going to hold unoriginality against Dog Eat Dog too much. Although Diesel comments about how “one last job” is always doom, so you’d think if the film was self-aware enough to comment on it, they might have enough creativity to play it out differently.

There are good Cage moments scattered throughout Dog Eat Dog but it’s the tone that makes the whole film unpleasant. A bumbling crook movie without the humor or tone of the Coen Brothers or Quentin Tarantino is usually pretty dire. Dog Eat Dog seems so hateful and nihilistic that it’s no fun, and I am far from squeamish when it comes to gratuitous violence. Paul Schrader’s bumbling criminals are really violent, not endearing or cute. 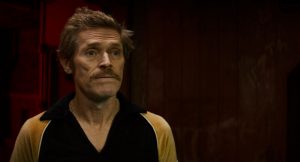 It also feels like the film is blatantly pushing our buttons to make sure we don’t like these “lovable losers.” From Mad Dog murdering a mom in front of her daughter to Troy punching a female cop, the film makes a conscious choice to portray vile actions instead of just inept ones. The only way this film knows how to celebrate the frivolity of criminal life is to have them blow all their money on coke and hookers.

Early in the film, Troy talks about Humphrey Bogart, which may seem like a non sequitur but as enjoyable as the payoff is, it feels thin and forced. Cage can be suave and charming, cool and crazy whenever called upon, but it’s the film that is uneven.

It is further frustrating that this hodgepodge is packaged nicely. The camera moves gracefully and frames characters interestingly with negative space, racking focus to highlight characters at different moments, sometimes in black and white for an effective punchline when it becomes color. Newcomer Alexander Dynan can shoot, so maybe one blessing is Dog Eat Dog gave him a good demo reel.

Cage’s last movie with Schrader was actually good. They disowned the released cut of Dying of the Light, and it turns out the reason was because Lionsgate color corrected it. But Dying of the Light still told a straightforward story and Cage was great in it. This is the truer representation of their vision?

Beyond Fest Review: Dog Eat Dog Sure Eats Something All Right

Don’t worry, I had realistic expectations for the new Nicolas Cage movie. Dog Eat Dog is one of his movies that will predominantly go straight to video with obligatory theaters but nobody really sees it in theaters. It might end up being gr...
0
Average User Rating
0 votes
Please sign in to rate.