It may sound off putting to say that the best part of a stand-up comedy rom-com is the scary medical drama, but hear me out. The culture clash of an Americanized Pakistani comic is valuable and should absolutely be told, but if we can get cultural empathy and medical foresight in the same movie, that makes The Big Sick win-win! 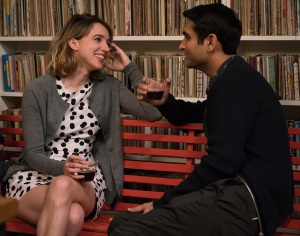 Kumail (Kumail Nanjiani) is a struggling standup comedian. He hits on Emily (Zoe Kazan) after a show and they start dating, despite the fact that his mother (Zenobia Shroff) is still inviting candidates over for dinner to arrange their marriage to Kumail. Emily breaks up with Kumail over his conflict between their relationship and his family, but when Emily goes to the hospital, Kumail ends up the only contact and meets her parents Beth (Holly Hunter) and Terry (Ray Romano) in the waiting room.

Anyone who’s dealt with an extended hospital stay on either side will relate to this. Hopefully people who have been fortunate enough not to spend time in a hospital will be able to relate to what it’s like just waiting, not knowing, not being told. Grief is difficult enough to address in the aftermath but grief is definitive. The uncertainty of a hospital stay amplifies the emotions and manifestations of acting out exponentially. 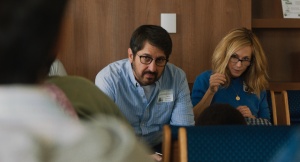 Hunter and Romano do a great job conveying this purgatory. It’s clear Terry and Beth had some issues before this. They are mostly trying to put it aside and focus on Emily, but they also come from different approaches when dealing with doctors.

Of course, most families don’t have to deal with an ex-boyfriend while their loved one is in the hospital. That forces many other issues into the dramedy. Beth certainly knows everything Kumail did to blow it with Emily and she’s a rightfully protective mother. Yet he is the only one in Emily’s life who is sticking around for this crisis so that’s something.

Spoiler alert, The Big Sick is autobiographical, in case playing Kumail Nanjiani, a standup comic wrestling with his Pakistani heritage didn’t clue you in. You can easily find out how this situation turns out. (Also, the co-writer of the script is a spoiler.) In some ways it’s vulnerable for Nanjiani to play his own insecure self at a less flattering time in his life, but hopefully constructive in showing others how to navigate their own growth.

While parts of the ending are foretold, I can see writers Nanjiani and Emily V. Gordon along with director Michael Showalter doing their best to make sure major life growth doesn’t fit into a neat movie box. Nanjiani’s rejection of his parents’ culture may seem obvious to American audiences, but he’s not really being fair to the women who don’t know he’s only humoring his mother. They’re as invested in the dates as Kumail’s mother. He has to commit to who he wants to be and be up front with his family. 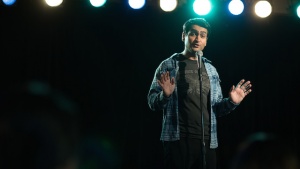 Most of the standup, from Nanjiani and his comedian friends, isn’t that good. Perhaps this was intentional because it was during Nanjiani’s struggling days. If so, that’s also brave to put that out there. I’ll have to google if he did jokes about being the first to die in a horror movie and mixing heroine with Tylenol. He certainly saved his best material for the most significant set in the movie. His joke about naming a child “Void” is rather clever. At the same time, he deals with a racist heckler which I’m sure is unfortunately common in his experience.

This moment is where The Big Sick gets real because so many things are happening. Kumail knows better than to engage, but Terry and Beth are in no mood to suffer fools. It’s the moment of crisis that shows who each character really is. Maybe not the only moment, because Kumail showing up to the hospital is huge and Beth allowing him to stay is huge, but it’s the most demonstrative cinematically of good people all having an equally correct way to handle conflict.

The Big Sick is raw and emotional in the way that great movies can put you through the ringer and give you a catharsis. The cast is lovable and real, and it deserves all the praise it’s gotten already.