In 1974 Bob Clark, future director of A Christmas Story, would make spirits dark with Black Christmas. The movie became a cult hit and a landmark in the horror genre, so when Hollywood came calling for a remake we ended up with a forgettable entry in 2006. Fanboys seemed to assume the worst was over, until now. In 2019 it was announced that director Sophia Takal and podcaster turned screenwriter April Wolfe would be helming a new interpretation of the movie which caused men online, including famed horror host Joe Bob Briggs, to put this new remake on the same level as the Apocalypse. In the end, what do they have to fear? Well, according to this new take on Black Christmas, the answer is themselves. This pointed, incredibly prescient slice of terror puts women’s terror front and center, turning Black Christmas into a slick (and unfortunately far too timely) story of gender dynamics that’s amazingly cathartic to watch.

Black Christmas remains a slasher movie, but one that capably balances the old-school horror with a firmly female gaze. A woman walking down the street with a man behind her inspires just as much tension and suspicion as characters entering unknown dark rooms. What Wolfe and Takal do so skillfully is make Black Christmas accessible to all genders. A female audience will relate to different elements, but the goal for everyone is the same, to inspire fear, which it does. Imogen Poots plays the lead character of Riley Stone, a date rape survivor who, as much as she’d like to get her life back, is reminded of her rapist every day, whether that’s in his actual appearance on-campus or in the fraternity house where he’s revered. Wolfe has said the movie came about in the wake of the Brett Kavanaugh hearings, with a certain one-liner dropped in that’s familiar to anyone who watched those hearings.

But more than its timeliness, this new iteration of Black Christmas brings up questions of what remains the same. Nearly every one of the female characters assembled brings up the history of the patriarchy, whether that’s resident feminist Kris (Aleyse Shannon) or the more complacent Helena (Madeleine Adams). This generation of girls has grown up knowing that if they go to the police to inquire about a missing friend the cops will consider them “hysterical” or overly anxious. Once the girls start disappearing it takes on added poignance to anyone who hasn’t been believed when they’ve felt worried about someone they’ve loved. 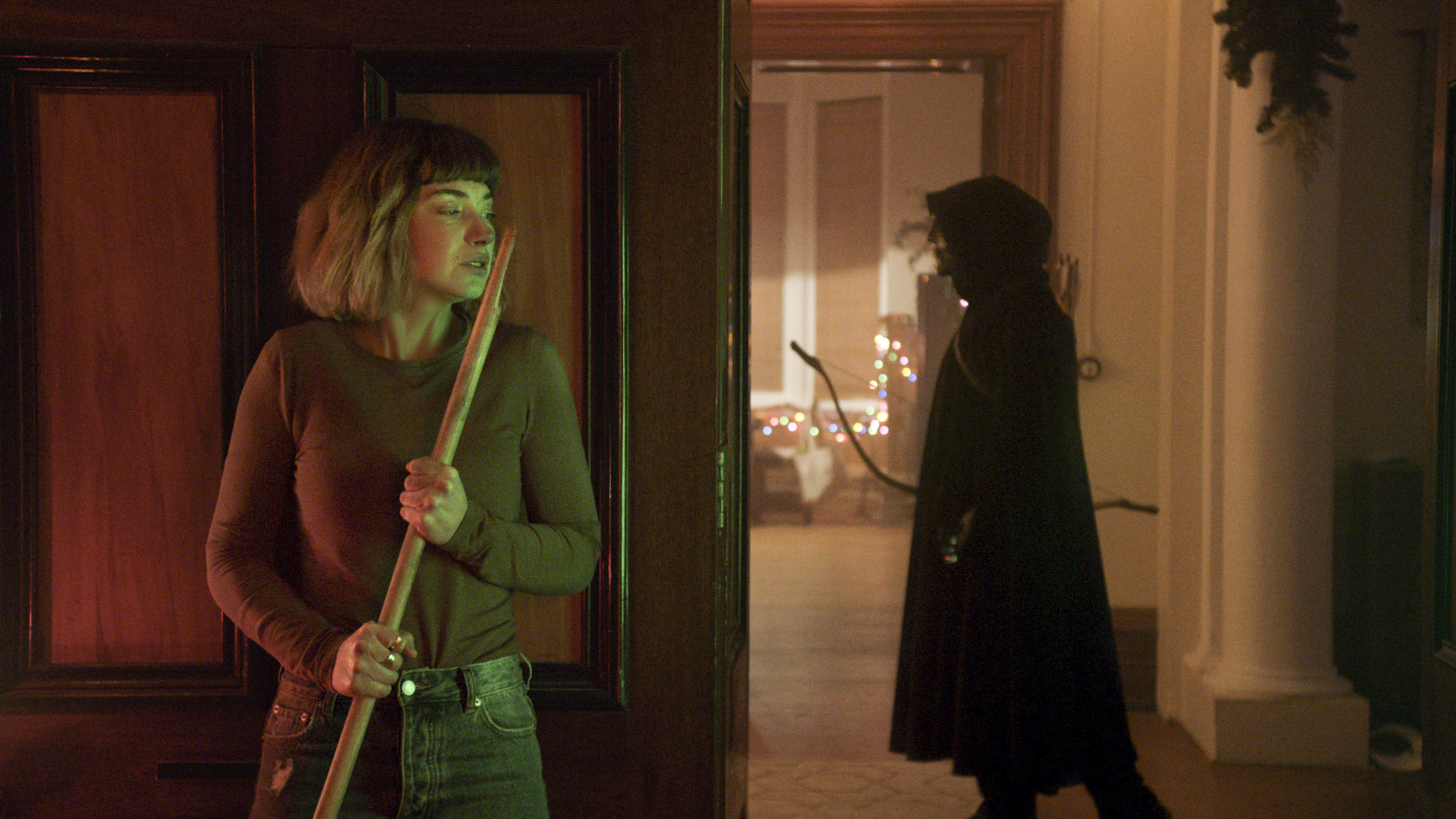 The film takes its time developing things, reliant on an atmosphere of general anxiety (for women, a general state of being). Riley and her friends are preparing to do a talent show routine for the frat that hosts Riley’s rapist. The routine itself is utterly brilliant and, again, a great screw you to anyone who has been wronged, but especially women. It also lays out the groundwork for the ancient evil that brews beneath the surface. This take on Black Christmas couldn’t have known that in 2019 we’d be talking about the long-standing and gnarled ways the privileged have maintained their power in works like Ready or Not, Knives Out, and Parasite. Black Christmas fits right in with a plotline involving cults, cultural appropriation, and dissecting the power we imbue in objects like statues and monuments. Wolfe’s script seems to say that a lone, crazed wingnut is too easy to explain away evil in this day and age. What’s scarier is a group of frat boys who believe they’ve been owed power for centuries.

Once the horror movie takes hold it never lets up and thrives on the strength of its actresses. Poots has played this type of character before, one moody and reserved but hiding an inner strength just waiting to be tapped into. She’s not a final girl in the traditional sense but one in line with actual women of this time period. She cares about people and that’s deemed by the cops to be too much; she wants to be a strong woman, but butts heads with Kris over what that is. She’s a complex character in a world that acknowledges women aren’t painted in one shade. Shannon’s Kris is a great foil, particularly as she’s written as the Feminist of the group, crusading against misogyny and racism, but even then she’s not always right. She wants women to act in her image, causing her to butt heads with Riley and remind women that being different is okay. Lily Donoghue and Brittany O’Grady round out the group though they don’t have nearly the nuance of the previous two actresses; you still care about them nonetheless because of their personalities.

Just as interestingly written are the men. Cary Elwes is the most recognizable as Professor Gelson and he looks to be having a blast in this. But more intriguing are the male allies: Caleb Eberhardt’s Landon and Simon Mead’s Nate. Black Christmas does something that A Quiet Place did, in that you can divorce a character’s actions from the twist and it still makes sense. In this case, both Landon and Nate fall into the trap of asserting their masculinity in traditional horror movie ways that the script brings up. Aside from the twist, the script asserts that men believe they have to be saviors and questions why that is.

Black Christmas (2019) has a lot riding on it and it’s impossible to believe the vitriol against it would be this high if it was directed and written by men. Takal and Wolfe craft a smart, deliciously terrifying feature that’s poignant, timely and, for better or worse, timeless. Go see it and support filmmaking like this!