Throwing around the concept of a herculean task can feel like one is going overboard when it comes to a movie, yet here we are with Black Panther: Wakanda Forever. Co-writer and director Ryan Coogler had a lot in front of him when stepping back behind the camera to helm the sequel to 2018’s Black Panther, an Oscar-winning, global phenomenon. While delivering a movie he could feel proud of as a filmmaker, it would also mean dealing with the COVID-related delays, navigating the loss of the lead character, honoring the legacy of Chadwick Boseman, satisfying Marvel fans with another Wakanda-themed adventure, and fitting an emotional story within the realms of the ongoing MCU narrative. It would be impressive to merely accomplish some of those goals, yet here we are with a large-scale sequel brimming with life, adventure, and the sense of wonder these Marvel films so rarely achieve. Even if the demands of a franchise can leave this 161-minute film feeling a bit overstuffed, the effort to deliver a sincere superhero feature gives further meaning to the chanting of “Wakanda Forever.”

From the start, it is made clear in the film that King T’Challa (the late Boseman) has passed. It strikes a powerful blow to Wakanda, particularly the King’s sister, Shuri (Letitia Wright). She feels guilt over not being able to use her incredible skills with technology to save her brother in time. While there has been much speculation as to who would take up the mantle of the Black Panther, this film wisely takes its time in establishing a central figure. Instead, while catching up with the various Wakandans, there’s plenty of time spent establishing a new possible threat.

Being set in a post-Avenger: Endgame world, along with the previous film’s conclusion that led to Wakanda revealing the truth of its nation to the world, complications have arisen. Vibranium was once merely a metal that Captain America’s shield was made out of. Now, it’s a highly sought-after commodity that Wakanda controls. Or so they thought. Enter Namor (Tenoch Huerta), the leader of Talokan, a secret underwater civilization. With some nations seeking out Vibranium in other places, Namor now feels his people are in danger of exposure, leading to him taking action against Wakanda.

Much like the first Black Panther, it’s evident that Coogler and co-writer Joe Robert Cole are invested in ensuring the film’s antagonist is firmly established as a developed character with relatable motivations. Namor is one of the oldest comic book superheroes and is reimagined for the MCU as Mesoamerican in his origins (we’re saving Atlantis for Aquaman). He has plenty of unique features (ankle wings, pointy ears) to make him visually interesting. Still, the way Huerta plays this character helps the film deliver on the idea of this villain being more of an antihero with plenty of power, yet clearly soulful. It’s a strong performance and easily stands with the best the MCU has offered as far as the villains are concerned.

On the other side of things are Wakanda and its people. While the action put forward is effective and a visual upgrade from the first film (the overemphasis on criticizing some middling CG in the finale as seemingly the only way to throw pushback against the film was taken to heart for this sequel), there is so much time spent on existing in this world and learning more about it. Most important is understanding the people who were closest to T’Challa.

Angela Bassett’s return as the Queen Mother, Ramonda, frankly feels justified as one of the very few times any performance in the MCU deserves more than just high praise. With an expanded role, how she balances emotion and diplomacy is an important angle for all the other characters to follow up on. This is emphasized well when considering her connection with Nakia (Lupita Nyong’o), the former spy for Wakanda whose relationship with T’Challa led to a shift in her priorities. The central understanding between them is the importance of Wakanda, which echoes the rest of the primary cast.

Danai Gurira similarly gives her all as Okoye, the head of the all-female special forces team, the Dora Milaje (which was inspired by the story told in The Woman King). Having been ultimately unable to protect her King, Okoye is pushed to various limits, given new complications. And yet, the film gets plenty of mileage out of her dry sense of humor by pairing her up with the more lively Shuri. Fittingly, this leads the pair to the introduction of the very spunky Riri Williams (Dominque Thorne), another child prodigy in the realm of genius inventors.

The effectiveness of all of these performers (not to mention Michaela Coel as Aneka, another Wakandan warrior, and the return of Winston Duke as M’Baku, leader of the Jabari) is supported by how the film lets them work as characters who happen to exist in a film exploring the Black experience, without feeling the need to highlight it in obvious ways. Compared to the first film, for example, which had Michael B. Jordan’s Killmonger calling out Wakanda for letting Black people worldwide suffer by staying hidden, this film takes a different approach. Having Riri, a young Black woman from Chicago, experiencing Wakanda is a far different encounter, showing how diversity can be notable in other ways.

This similarly extends to how the film is primarily made up of female characters in total control, without needing a scene where everyone wants to pat themselves on the back for accomplishing it. Whether or not one wants to call an entry in the MCU a feminist feature, the focus on intelligent people doing what they can to protect their respective natures is what gets the most attention. Coogler and his team happen to have considered all that’s been laid in front of them and are accomplishing what makes the most sense, given these characters and how a utopian society would function.

From a production standpoint, Wakanda Forever is a wonderful achievement in developing comic book worlds come to life. More is delivered on the culture of Wakanda, which means delving further into the Afrofuturism angle that helped make the first film so intriguing. The way customs and art direction have combined to make this place feel authentic to the people within it goes a long way. The same could be said for the costumes designed by Oscar-winner Ruth E. Carter, as there are so many elaborate elements going into areas ranging from causal wear to battles to funerals.

At the same time, this film also focuses on Namor and his people, which means developing an underwater nation inspired by Mesoamerican and Mayan culture. One sequence in the movie finds Shuri discovering all that has existed in the ocean’s depths, and it’s a true sight of wonder. I have no doubt James Cameron is about to basically reinvent how underwater scenes can be filmed in his upcoming Avatar: The Way of Water. Still, after several MCU projects that have come up short in the effects department, it feels clear that no expense was spared in favor of making sure Talokan and the blue-skinned people residing in it looked great.

As far as what’s gone into making this a sequel to Black Panther, many natural steps have been taken. No longer an isolated nation, threats of action come from different areas. Martin Freeman returns as CIA Agent Everett Ross, and his connection to Wakanda makes him an ally attempting to help where he can. This means connecting Black Panther more closely to what’s going on with the rest of the MCU. Being a standalone film in an ongoing series can be tricky when featuring characters that can crossover. Here, I like how things have been folded in or seeded for future adventures. The key is assessing what that does for me as a viewer trying to engage with the story being told.

This extends to the film’s primary thrust, grieving the loss of its star. There’s an argument made that the role could have been recast. That’s not my decision to make, and accepting the choice to incorporate Boseman’s death into this film also means seeing Coogler wrestling with his emotions in the process of making this movie. That can lead to interesting work, and it has here. There’s no required “next story to tell” with Black Panther, and the route taken was to deliver a film about characters coming to terms with the death of a King. The fact that it doubles with knowing an audience will be contending with the loss of an emerging Black icon is not taken for granted. Instead, it informs the film in the most respectful of ways.

In that regard, it is here that Shuri is most important. Whether or not she ultimately takes up the Black Panther mantle, there’s an extensive reliance on her accepting what has happened and moving forward. That makes the relationship between her and Namor all the more important, as both want what is best for their people, but they also find themselves driven by anger. The thing is, however, neither of these characters are bad people. They have just been hurt by events in their pasts. Watching Wakanda Forever find the nuances that further inform these individuals, amid all that comes with delivering a $200 million action adventure, helps raise the status of this one MCU film among many.

Finally, I can’t not mention the music in this film. Oscar-winner Ludwig Göransson returns with an impressive score that truly lifts up the film. With a story inspired by Nigerian and Mesoamerican cultures, a great effort was put into developing culturally appropriate themes that are quite affecting, reflective of the various characters we follow, and plenty engaging in how they track the emotional arcs of the movie. Wisely, Coogler and Göransson find moments to utilize silence as well, which similarly manages to say plenty.

Okay, so if there are further concerns about how this movie functions as a comic book film, it’s not as though Wakanda Forever comes up short in any way. The secret to the MCU’s success has always been the enjoyment of the actors and the characters they portray over the overlong, CG-heavy action sequences, but there’s a skewed balance here, given the film’s length. With that said, plenty of splash page-worthy moments are brought to life, and while incredibly earnest, it’s not as though there isn’t plenty of fun to be had. The presence of Wakandan tech and Iron Heart, alone, allows the film to deliver on car chases, aerial and aquatic battles, spear fights, and more.

The way Marvel Studios has turned Black Panther: Wakanda Forever into an event is not unprecedented, but it is understandable. The first film was a massive success in many different ways. The follow-up has to compete without having its central figure in place. To Coogler’s credit, this gigantic film still works as an emotionally effective one. Whether there’s too much on this film’s plate, the sincerity and reverence in place comes with plenty of adventure to enjoy. Plus, the continued care in bringing audiences into the world of Wakanda is only further enhanced by the incorporation of Namor and his people. It was no small feat, but this kingdom continues to shine. 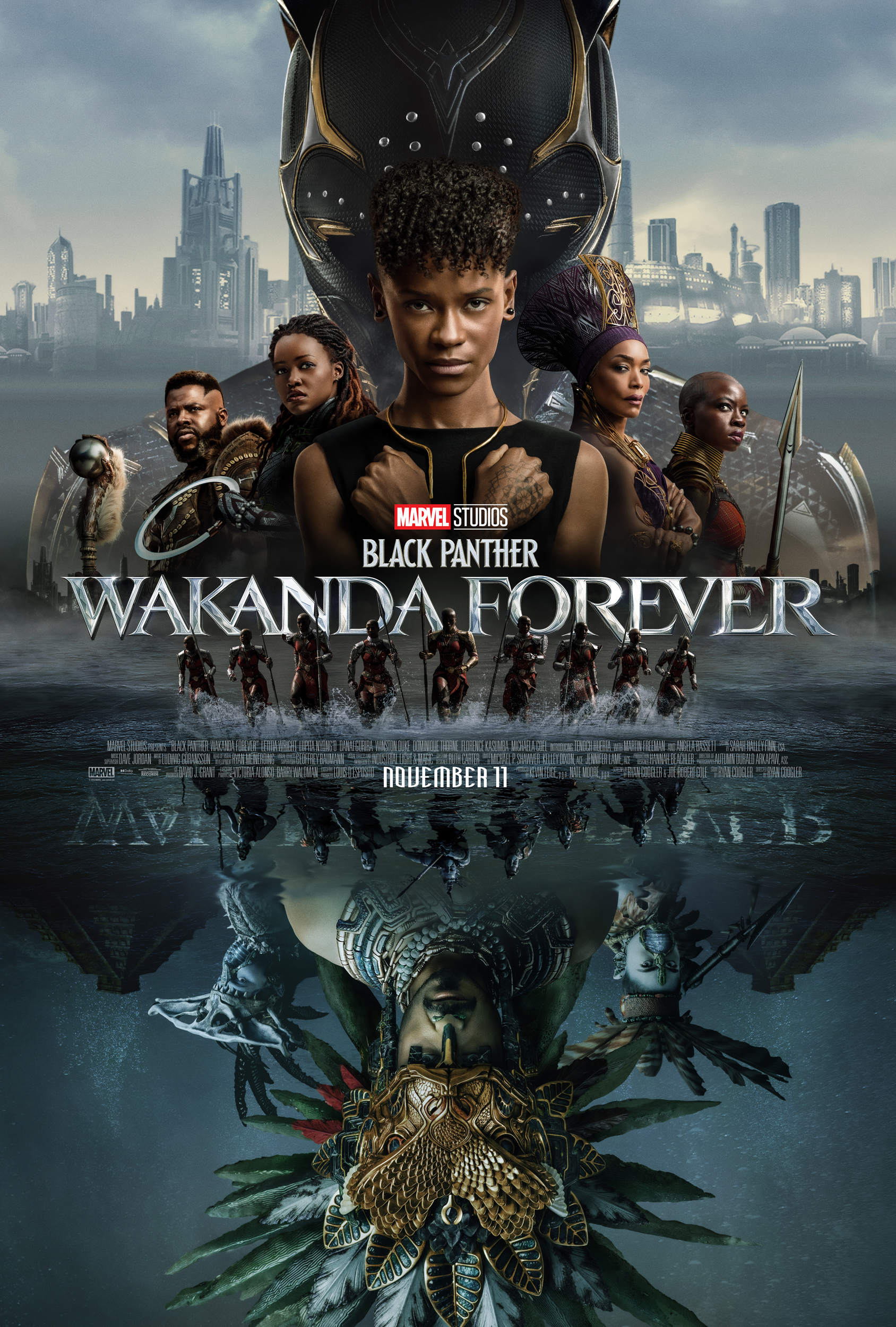 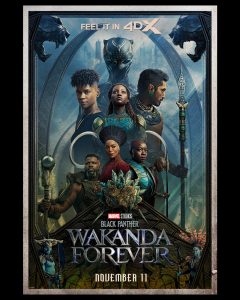 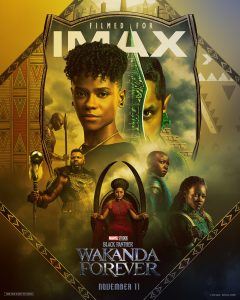 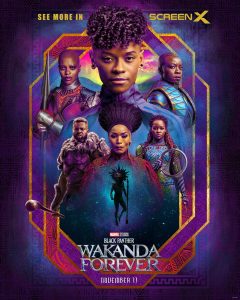 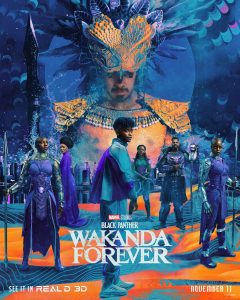 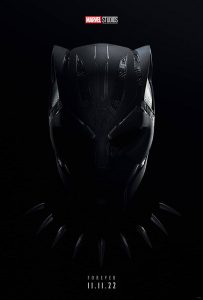 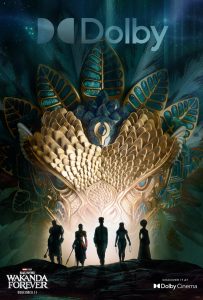 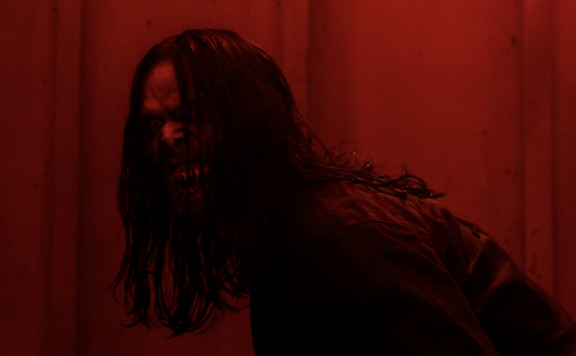 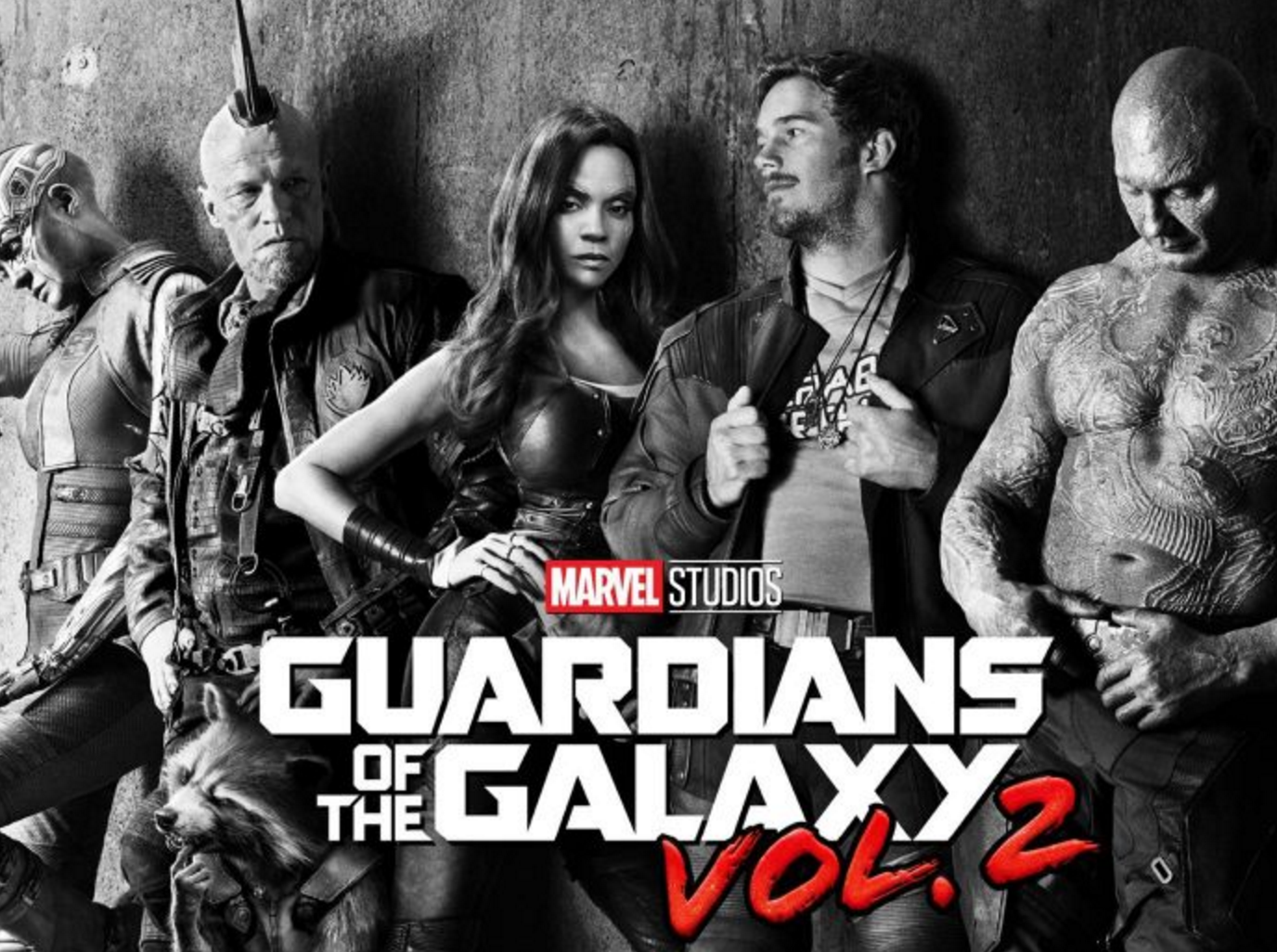 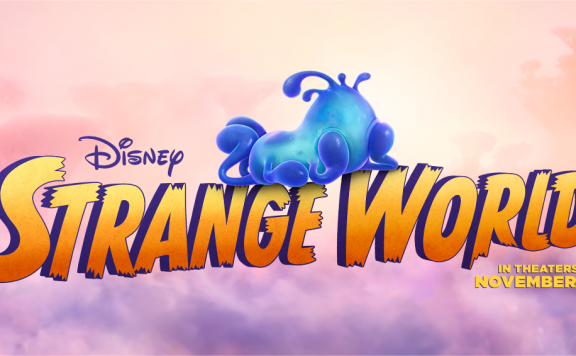 ‘Strange World’ Review: Tribulations of an Adventurer Inside Avalonia
November 23, 2022 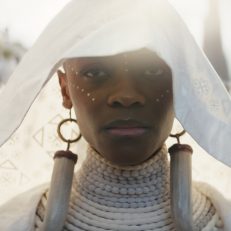 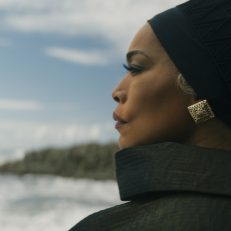 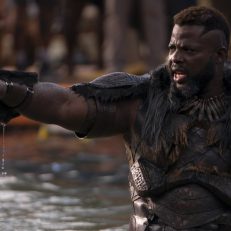 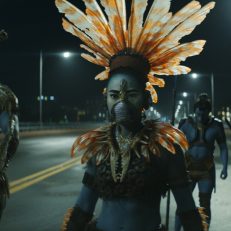 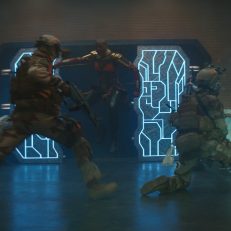 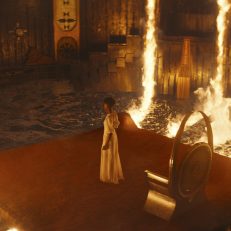 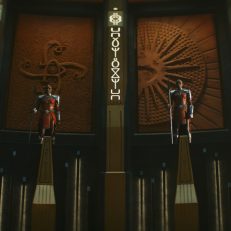 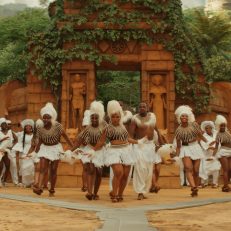