The main reason I ever wanted a sequel to Blade Runner was just to spend more time in that world. Two hours only scratched the surface of the groundbreaking take on the future. The long-awaited Blade Runner 2049 delivers on the promise of the world of Blade Runner spending more time and visiting more corners of the now even more distant future. 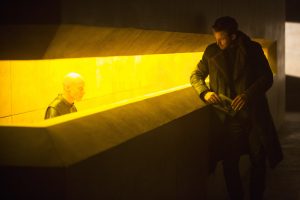 Blade Runner 2049 takes its time introducing its new world and new concepts. That feels right. Blade Runner was first and foremost a noirish mystery, and it still is, albeit with some added touches of gold because that’s what Roger Deakins likes to shoot (see also Skyfall.) The mystery hinges on the legacy of Tyrell’s Nexus-8 replicants, so that’s good expansion on the technology and mythology.

Director Denis Villeneuve probably could have trimmed some of the buildup of K (Ryan Gosling) entering scenes, but that would’ve only saved about 10 minutes total and that time lets you bask in the Blade Runner world. The discovery is what it’s about.

This mystery expands beyond Los Angeles so we get to visit other corners of the Blade Runner future. There are still plenty of rain-soaked, Japanese inspired city alleys, don’t worry. 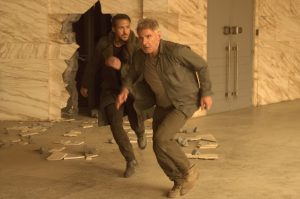 There are more action set pieces than the original had. They save most of it for act three, but K does get into a few scuffles on the way. Harrison Ford throws punches better than anyone in Hollywood so any opportunity to see him do that again is worth it.

I love Blade Runner but I didn’t have any major expectations from a sequel except to spend more time in the world. Blade Runner 2049 takes us back faithfully. There are some welcome callbacks to the original that never overstay their welcome, a balance many returning franchises fail to strike. There’s some talk of a soul too. Since Blade Runner’s big questions dealt with what it meant to be created, to exist, to be human and have memories, that’s promising. I don’t think there will be as much speculation about 2049 as there was about the original, but fortunately, the sequel leaves many of the original’s ambiguities intact too.

And of course, Franchise Fred dreams of electric sheep. Every sheep should have a sequel, no exceptions.