Since the ‘90s Jackie Chan wanted to combine his martial arts with Hollywood visual effects. It resulted in some horribly awkward movies like The Medallion and The Tuxedo (I still like The Myth though). It took another decade and a half for quality fx to truly be viable to his Chinese movies but movies like Chinese Zodiac and Kung Fu Yoga were fun. Now Bleeding Steel is another good one that fulfills the promise of Chan using his style with technowizardry.

Mr Lin (Chan) is injured protecting a scientist in a high tech attack. 13 years later Rick Rogers publishes the hit novel Bleeding Steel that describes the same technology in detail. The gang comes looking for him but now Lin is full on Jackie Chan defending him. That’s a lot more plot than we generally need for Jackie Chan. “Jackie Chan has to fight/escape bad guys” is plenty as his creative action is the highlight, but Bleeding Steel incorporates Chan’s comedy fights with a sci-fi action seamlessly.

Lin performs several setpiece fights against the evil gang using his martial arts and various props. At the Sydney opera house he uses acrobatic rigs and magic show props in a fight, then fights on top of the opera house. I wonder how long that fight was in the works. He’s shot a lot of movies in Australia.

It’s clear Chan choreographed his young actors too because their fights are punctuated with comedy, even though they move more like regular people in a fight. Like his daughter Nancy (Na-Na OuYang). The female villain (Tess Haubrich) is a formidable opponent too even without her toys. 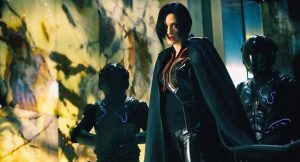 The opening action sequence is more of an American style shootout with big explosions and introducing all the CGI technology. Those are practical car explosions and flips, and it’s not shakycam. You can actually see the action, so that’s novel now. Chan still slides across the ground, and I bet he still did that for real. 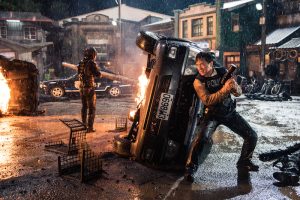 The American release of Bleeding Steel is dubbed. I guess subtitled is too much to hope for, but it’s mostly a reasonable dub. Of course Chan can do his English dialogue. Only Nancy’s love interest (Show Lo) is given an absurdly over the top voice.

Also there are no outtakes end credits. IMDB says they were in Chinese, so they must only be in the Chinese version. As a completist, I’ll probably still seek out an original Chinese language subtitled version, but it’s great to have new Jackie Chan on VOD (and some theaters) this week to see it instantly and confirm that another version is also worth seeking out.